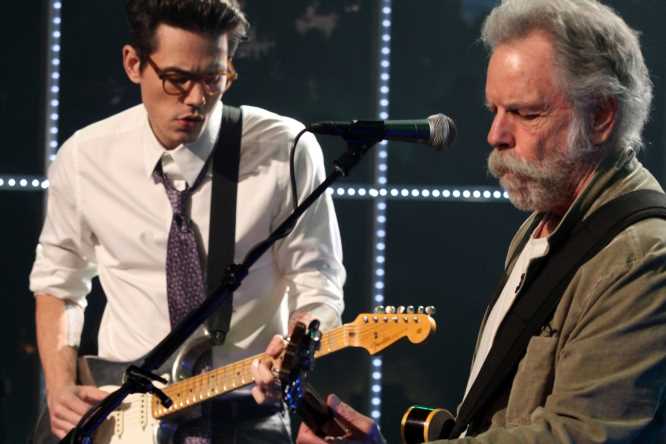 The Grateful Dead ceased to exist the minute Jerry Garcia died on August 9th, 1995, but they still had an enormous audience and the remaining members spent the next two decades trying to find ways to keep the music alive on the road. They called themselves everything from the Other Ones to the Dead to Furthur as members of the original band came and went, but the one constant challenge was finding a frontman. Jimmy Herring, Warren Haynes, John Kadlecik, and Trey Anastasio all gave it a shot, but they were all temporary fill-ins.

It took a series of completely random events for the Dead to find a singer-guitarist that could bring them back to stadiums and keep them there summer after summer. The first one took place around 2011 when John Mayer happened to come across their 1980 classic “Althea.” He was only vaguely familiar with their music, but something about it touched him deeply. “It came up on some Pandora algorithm,” he told Rolling Stone in 2015. “I don’t remember who the artist was. It was a total, blind taste test.”

He began listening to their music obsessively. “As soon as you find your first entry, it’s like threading beads on a necklace,” he said. “I’ll never forget that beautiful, bouncy interlude between the verses in ‘Playing in the Band’ or hearing songs like ‘Estimated Prophet.’ Nobody handed me a record. I took it all in via SiriusXM, the Grateful Dead channel, which I still play for hours each day, whenever I’m in the car.”

The next random event took place when Craig Ferguson stepped down as the host of The Late Late Show in December 2014 after CBS failed to gave him David Letterman’s 11:35 p.m. time slot. James Corden came on as his replacement the following March, but in the interim, a series of guest hosts piloted the show. They mainly included professional comedians like Drew Carey, Wayne Brady, Jim Gaffigan, and Thomas Lennon, but for three days in early February 2015, John Mayer took on the job.

The guest on his second show included Bob Saget, Mary Lynn Rajskub, and Bob Weir. Mayer wasn’t going to pass up the opportunity to play with his newest musical hero, so he strapped on a guitar and played “Truckin’ and “Althea” with Weir, drummer Jim Keltner, and bassist Sean Hurley. Check out video of the latter song here.

Weir was on the show to promote the Dead’s upcoming Fare Thee Well farewell concerts with Trey Anastasio, but the chemistry with Mayer was instantly apparent and the idea of a post–Fare Thee Well lineup of the Dead began percolating. Nothing was made public, but within weeks of the Late Late Show performance a plan was in place for John Mayer to tour with with Weir and Dead drummers Mickey Hart and Bill Kreutzmann later in the year. (Phil Lesh had had enough of the road at this point and wanted to step aside, meaning the Fare Thee Well lineup was indeed the last time all four original members played together.)

Many longtime Grateful Dead fans were a little skeptical that Mr. “Your Body Is a Wonderland” could handle the job, but Mayer worked his ass off to learn the catalog and blew nearly everyone in the audience away when Dead & Company began playing arenas in October 2015. They moved into stadiums the next summer, raking in about a million dollars per show and introducing the Grateful Dead experience to a whole new generation. It’s now four years later, and they are selling just about as many tickets as the Grateful Dead did at the peak of their popularity. And it all began thanks to a song randomly appearing on John Mayer’s Pandora stream and CBS denying Craig Ferguson the David Letterman time slot.