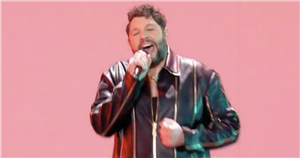 After cancellation last year, the BBC competition was back on our screens to entertain fans across the continent.

The song contest is known for a combination of wacky and wonderful with this year’s selection certainly not leaving you disappointed, including an appearance by international star Flo Rida on San Marino’s song Adrenalina by Senhit.

As Eurovision parties across Europe commenced, many watched in hope for a positive outcome for our UK hopeful James.

After the disappointment of the cancellation last year, the musician had to return with a brand new song, Embers, due to the rules not allowing songs to be reentered even if the show is cancelled.

Despite receiving high praise or his performance on the night, James unfortunately came in last place.

Taking to Twitter, one fan moaned: "Poor James Newman. Absolutely did not deserve that. His performance was epic."

Another added: "There's a really lovely response to those who've received no points, especially for James Newman. He deserved better."

A third person posted: "My heart absolutely breaks for James Newman. He really did us proud. Regardless of points."

The hosts, the Netherlands, put on a spectacular show thanks to the stunning stage set up at the Rotterdam Ahoy.

There was another disappointment for fan favourite Daði Freyr, whose song for last year’s contest was so popular it was regular played on radio stations throughout the year.

Missing out on performing last year and due to a positive COVID test within his band, Daði was unable to perform and instead they played footage of an earlier rehearsal.

Many contestants who were scheduled to compete last year finally took to the stage of the final including Stefania representing Greece, Jeangu Macrooy for the Netherlands, Hurricane for Serbia, GO_A for Ukraine and more.

One of the most touching songs came from Spain’s Blas Cantó, whose song was written in homage to his grandmother who died from COVID-19.

With the contest over for another year, we now know we are heading to (BLANK) in 2022 where the UK will get another opportunity to take the title for the first time since 1997.