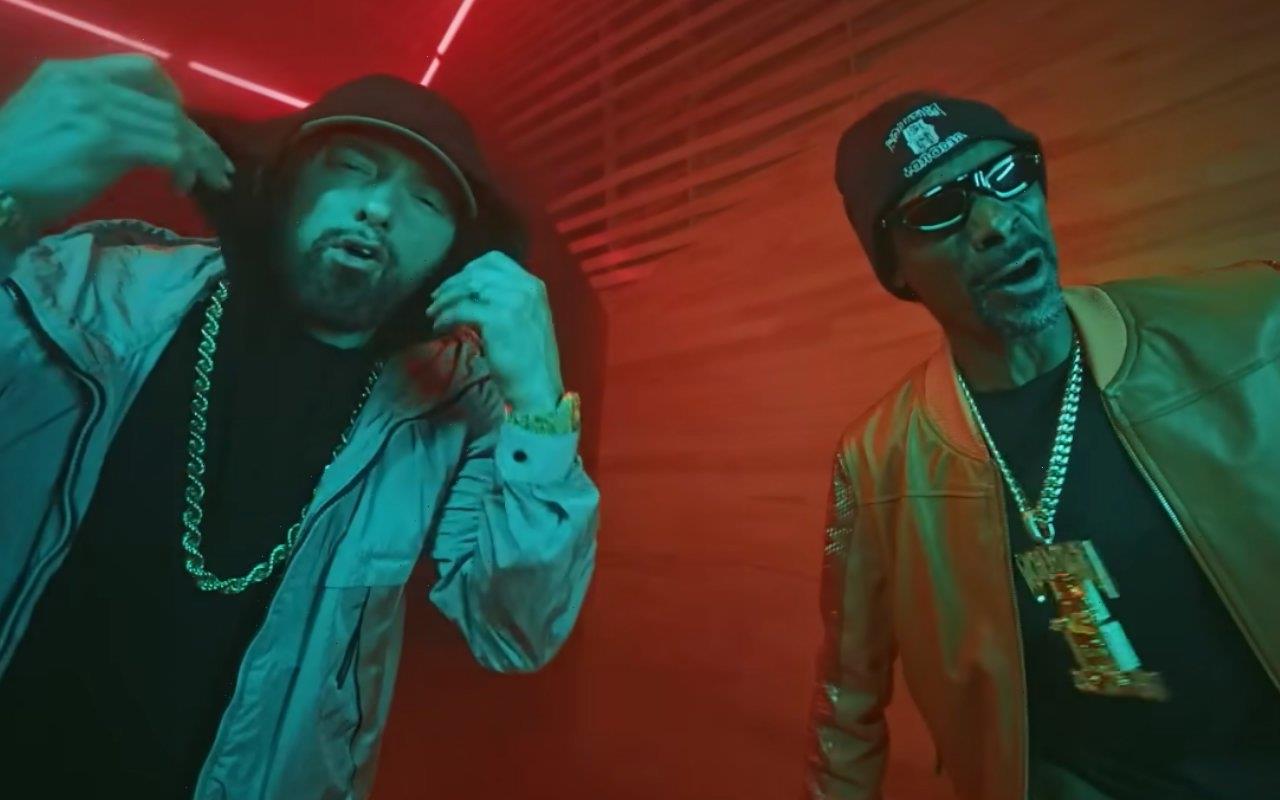 The two hip-hop stars, who headlined the Pepsi Super Bowl LVI halftime show together along with Dr. Dre, Kendrick Lamar and Mary J. Blige, release the new collaboration after they squashed their 2020 beef.

AceShowbiz –Eminem and Snoop Dogg have teamed up for a new collaboration. On Friday, June 24, Slim Shady and his fellow Dr. Dre protege released a single called “From the D 2 the LBC” along with its official music video.

Directed by James Larese, the visuals opens with Eminem calling out Snoop for smoking in a recording studio. The “Drop It Like It’s Hot” rhymer, however, urges his pal to just spit the lyrics instead.

In the track, Eminem and Snoop pay homage to their respective cities, Detroit, Michigan and Long Beach, California. As they rap to their own verses, the pair transform into two cartoon monkeys which represent their connection to NFT collection Bored Ape.

The new single came after Eminem and Snoop headlined the Pepsi Super Bowl LVI halftime show in February along with Dr. Dre, Kendrick Lamar and Mary J. Blige. Eminem and Snoop shared the stage together after they rekindled their friendship following their 2020 beef.

When addressing his past feud with the “Not Afraid” spitter, the “What’s My Name?” hitmaker admitted that it was his mistake. “Man I love Eminem. And the thing is, we love hip hop so much, we competitive,” he first said when appearing on “The Breakfast Club”. The 50-year-old added, “We battle rappers, so that was supposed to trigger that in him.”

Snoop, whose real name is Calvin Cordozar Broadus Jr., claimed he has apologized to Eminem. “And I felt like I was out of pocket,” he stated. “I apologized to him, and I let him know and I’m just bettering myself. I make mistakes. I ain’t perfect, I’m Snoop Dogg. I’m still dumb.”

Snoop continued detailing how they brushed off their differences. “But we brothers, and we family so we learn to appreciate each other for what we do, and we get down and we had a long conversation about the respect that we have for each other and the way we need to talk in public about each other,” he elaborated.

Their feud started in May 2020, when Snoop said that he wouldn’t categorize Eminem as one of Top 10 rappers. “[Dr. Dre] probably put Eminem in the position that he would be considered one of the Top 10 rappers ever… I don’t think so, but the game thinks that he’s a Top 10 lyricist and everything that comes with it. That’s just because he’s with Dr. Dre,” he said at that time.

Em responded by releasing a diss track called “Zeus”, in which he rapped, “I’m used to people knockin’ me, but, just not in my camp/ I’m diplomatic ’cause I’m tryna be/ last thing I need is Snoop doggin’ me.” He also confessed that the tone Snoop was using when he made his comment has “caught me off-guard ’cause I’m like, where is this coming from? I just saw you, what the f**k? It threw me for a loop.”