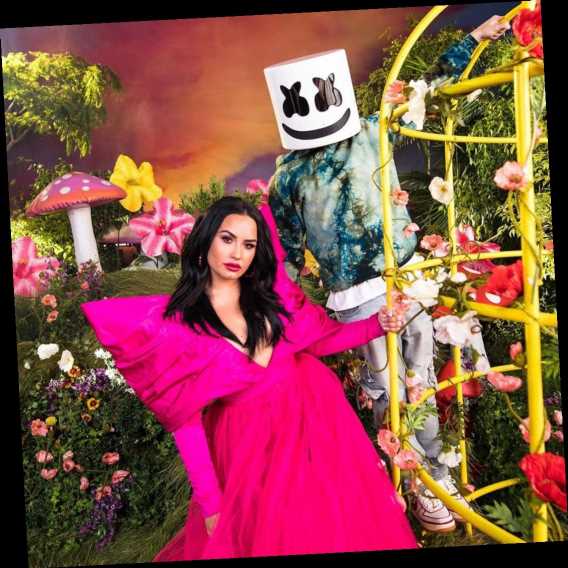 Demi Lovato is mixing things up with her latest release.

On Thursday, the 28-year-old pop songstress dropped a new version of her collaboration with Marshmello, "OK Not To Be OK," as well as an updated version of the pair's original music video set to the new remix.

Revamped by the musical group Duke & Jones, the new track provides a faster and more upbeat take on the track, which was originally released last month.

With the song focusing on Lovato singing to her younger self, the "I Love Me" singer croons on the track, "When you're high on emotion / And you're losing your focus / And you feel too exhausted to pray / Don't get lost in the moment / Or give up when you're closest / All you need is somebody to say / It's okay not to be okay." Lovato and the famed DJ both posted about the remix on the respective social media accounts, as well as Duke & Jones who said the release was a "surprise remix."

"#OKNotToBeOK remix is out nowww with @marshmellomusic 💗🦋 and we’ve got a new video for you too 😝, Lovato captioned her post alongside a clip of the new music video made to accompany the remix. "Thank you @dukeandjones for the new vibes," she added.

Marshmello similarly shared the same video and captioned his post with a simple siren emoji as he tagged the British duo.

Never miss a story — sign up for PEOPLE's free daily newsletter to stay up-to-date on the best of what PEOPLE has to offer, from juicy celebrity news to compelling human interest stories

The new release is the first music video release for Lovato since she called off her engagement to Max Ehrich last month.

"It was very hurtful to Demi when she realized that Max's intentions weren't genuine," one insider told PEOPLE. "Breaking off the engagement was not an easy decision."

Earlier this week, Lovato also dropped a new ballad on social media. The heartfelt song was then added to streaming services following its release.

The powerful ballad reveals Lovato's vulnerability and is reminiscent of some of her past tracks like "Anyone" and "Skyscraper."

The Grammy-nominated star teased the track prior to its release on social media, where she wrote, "Music is always there for me …"

"Still Have Me" is out now.