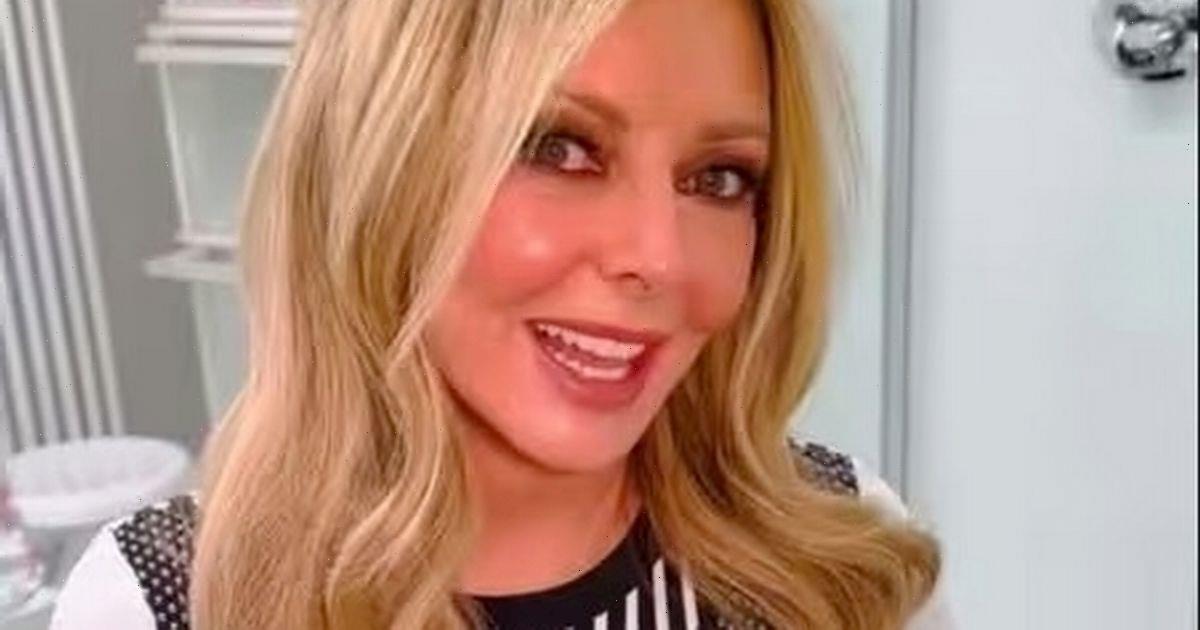 Carol Vorderman stunned her loyal fans by giving them an inside look into her morning makeup routine.

The former Countdown icon took to Instagram and uploaded a transformation video where she went from a bare-faced morning wake-up look before transforming into full-glam makeup.

In the clip, the stunning TV personality was filmed soaking up the morning vibes as she went bare-faced and sipped a cup of coffee branded with her newly launched podcast – Perfect 10's – logo.

In another shot, Carol's look had been transformed as her radiant glow was flaunted by her glam makeup look as she donned a figure-hugging, geometrical print top with tight-fitting leather trousers. The TV star beamed as she showed off her dramatic smokey eye and berry lip, which complemented the blush highlighting her sharp cheekbones.

Plugging her new podcast, her caption to her 298,000 followers read: "Back at @perfect10carol HQ today recording new podcast episodes [love heart emogi] Have you had the PERFECT 10 yet? Let me know…."

Her fans quickly flooded her with gushing compliments and many hailed her for posting her make-up-free face.

"Without makeup, you look even younger," wrote one admirer, as another fan commented: "You are so beautiful and really award you for sharing your make-up-free face."

A third penned: "Thank you, Carol. You're a big role model of mine," while a fourth gushed: "You're ageing beautifully, Carol."

It comes after the TV star planned a very different route for her life to go down before she joined Countdown.

Before applying for the Channel 4 show – which her mum actually signed her up for – Carol had no intention of participating in any kind of TV. Speaking exclusively to Daily Star, the 62-year-old revealed that before she joined TV, her sights were set on becoming a fighter pilot.

The star explained: "I was a free school meals kid in North Wales at a comprehensive school. I was a year ahead because maths was my thing. I stayed ahead, and once I completed my O Levels, I said I'd go to university.

"I had great results. I did the first step with an O Level in computer science as it was called in 1976."