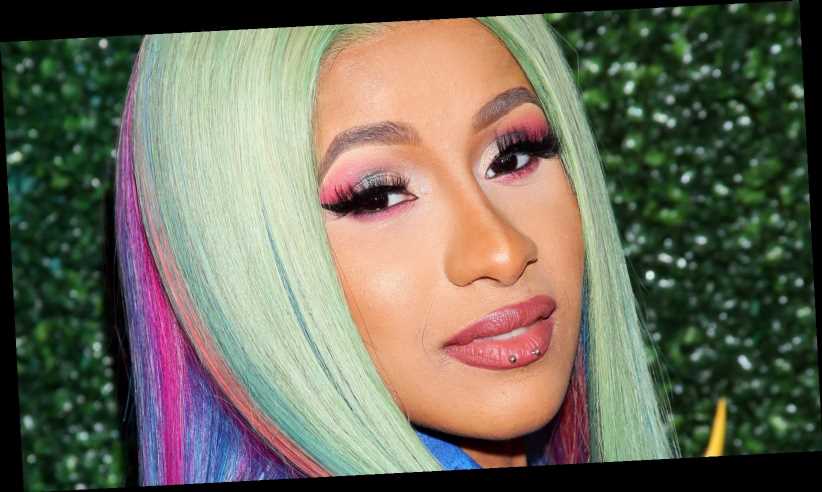 Cardi B and Megan Thee Stallion are raising eyebrows over their risqué performances at the 2021 Grammys. The two wowed audiences across the U.S. as the 63rd Annual Grammy Awards aired live on CBS on March 14, 2021, performing solo tracks before teaming up for their super sexy hit “WAP,” which caused quite a stir when they released it in August 2020.

Megan took to the stage first to perform “Body” before launching into “Savage.” The track won the Grammy Award for Best Rap Song, which she accepted alongside Beyoncé, who appeared on the remix. Cardi then joined Megan on stage for “WAP” and they gave a very steamy performance together in a giant bed, as they twerked and grinded against one another (via People), while the former also performed her hit “Up.” The two made the NSFW song appropriate for TV by cleaning up the very saucy lyrics, but that was not quite enough for all viewers.

Cardi’s risqué moves, in particular, got a whole lot of attention after she pole danced on stage in a short pink wig. The star wowed in a skimpy metallic bra top and bottoms and showed off her moves as she spun around and bent over in front of the pole, which was actually the stiletto heel of a giant shoe. But what are people saying about the performance? Read on to find out.

Cardi B and Megan Thee Stallion's performance was called 'inappropriate'

Some viewers took to Twitter during and after the 2021 Grammys to make it clear they were not so happy with Cardi B and Megan Thee Stallion’s confident display. One sent a tweet to the Grammy’s official account in which they claimed the performance was “inappropriate” for the CBS broadcast, which started at 8 p.m. ET. “This was great UNTIL Cardi B & Megan the Stallion started gyrating [on] floor, the bed, each other. Too tacky. Women don’t have to do that on public TV to be sexy, confident, & strong. I didn’t like this part of the show… Inappropriate!” they wrote.

Another pointed out that children watch the broadcast, writing, “I can’t believe that performance was allowed- Cardi B, waaay inappropriate, on a bed, the entire performance, thongs… kids watch the Grammys; and should be able to…” A third person tweeted, “I’m a true fan of music and most genres but I’m truly disappointed at the Grammys in that [Megan Thee Stallion] & Cardi B were allowed to perform in such an inappropriate manner.”

Others thought Cardi B and Megan Thee Stallion 'killed it'

It certainly was not all negative responses to Cardi B and Megan Thee Stallion’s sexy 2021 Grammy performance, however, as social media was also full of praise for the confident duo. “I just watched @iamcardib’s performance and SIS KNOWS HOW TO PUT ON A SHOW!!! She killed it & everyone saying other is straight lying!” one person tweeted. Another posted a GIF of Michelle Obama dropping a mic and wrote, “Without a doubt….BEST PERFORMANCE OF THE GRAMMYS TONIGHT….. has to go to MEG THE STALLION AND CARDI B!!! KILLED IT.”

Another poked a little fun at those who expected to see anything other than a racy performance from the duo, who have both been very outspoken about their sexuality in the past. “@iamcardib & @theestallion killed it…ppl who are mad were expecting what, Worship And Prayer?? Get ‘a bucket & a mop’ for those tears,” they teased, borrowing lyrics from “WAP.”

As reported by CNN, the duo’s bold performance featured some important messages, including promoting female empowerment and “sexual pride,” with the outlet dubbing it “one of the most memorable Grammy performances of all time.” Without a doubt!