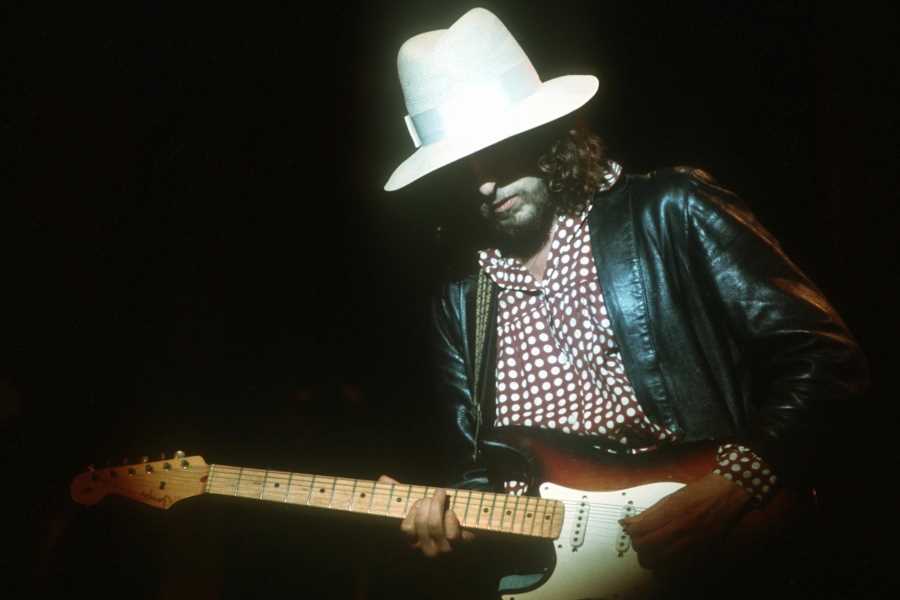 “It included a little bit of everything,” noted The Daily Utah Chronicle writer Jeff Howry in his review of the concert. “Exceptionally high quality music, a couple of nostalgia-inspiring Sixties music heroes, an aging poet of the Beat generation, and a living legend were all part of the bill…It was a night to remember.”

It was a night filled with unique moments for Dylan: the only time in his entire career that he performed the nine-minute Blood on the Tracks epic “Lily, Rosemary and the Jack of Hearts,” the first rendition of “Gates of Eden” since 1965 and, according to one contemporaneous report, a performance of the Desire deep cut “Black Diamond Bay,” which has never been played before or since.

But no recording of the Salt Lake City concert has ever surfaced, making it a mythical night in Bob Dylan lore and the object of intense fan fixation for decades.

Dylan is returning to Salt Lake City on June 30 for a show at the Eccles Theater, and a group of hardcore fans are using it an excuse to join forces and reach out to anyone that might possibly have a recording of the show via a new website and social media campaign.

“It would be beyond wonderful if someone had a recording that preserves this historic event for the world to hear!” they write to fans on Do You Have It? “It would not be the first time a long-lost tape resurfaced after being discovered in an attic or basement. Please ask family, friends and others who could possibly know, and also those who are attending the Salt Lake City June 30, 2022 concert. We are asking anyone who has either a recording or else any leads to please contact us at [email protected] or via Twitter or Facebook.“

Dylan aficionado Dag Braathen is spearheading the effort alongside a fan who requested to be referred to as his Twitter handle dylyricus. (He also runs a Dylan lyric variation website of the same name.) “Salt Lake City is the holy grail of missing tapes,” says dylyricus. “We are far from the first to try to find it. But we’re employing 21st century methods: the web site at doyouhaveit.info; Twitter, Facebook, and Instagram; the Expectingrain.com news page. We are ploughing various online archives and fanzines to verify existing info and to look for new. We’re even trying targeted Facebook ads!”

The Rolling Thunder Revue kicked off October 30, 1975 in Plymouth, Massachusetts. Shows were announced last minute and the vibe of the evening was extremely loose and informal, but the gigs were professionally recorded and several were filmed. The footage was ultimately used in Dylan’s 1978 movie Renaldo and Clara and Martin Scorsese’s 2019 truth-bending movie Rolling Thunder Revue: A Bob Dylan Story by Martin Scorsese.

A second leg of larger halls began April 18, 1976 in Lakeland, Florida. Most of these shows were also recorded by Dylan’s team, along with several fans in the audience, and the May 23 show in Fort Collins, Colorado was filmed and recorded for the 1976 Hard Rain live album and television special, which has been widely bootlegged.

But the recording equipment didn’t make it to Salt Lake City two days later, meaning any recording would need to come from a fan. “Every single concert on the 1974 tour was recorded by someone in the audience,” says dylyricus. “Just two shows are missing from 1975, six from 1976 and only two from the 118-date 1978 tour.”

“The odds are generally in our favor and so we are optimistic someone may have recorded it,” he continues. “Perhaps it was someone with no connection to the fan community that has been hard to reach. I have heard that sometimes journalists tape a show to aid with writing their review but we have so far been unable to track any of them down in order to test this theory.”

The Do You Have It? website features every bit of known information about the show, including five Salt Lake City newspaper reviews and the recollections of guitar tech Joel Bernstein, who vividly recalls Dylan and Baez duetting on “Lily, Rosemary & The Jack of Hearts.” (The site even a lyric sheet showing how they divided up the lines.)

Two newspapers note that Dylan played “Gates of Eden,” meaning it likely happened, but just a single source mentions “Black Diamond Bay.” “We list ‘Black Diamond Bay’ with a question mark,” says dylyricus. “While it would have been monumental to have been performed, it’s included in a contemporary fanzine’s list of ‘other highlights’ from the show, along with the likes of the more commonly performed ‘Oh Sister’ and ‘Knockin’ On Heaven’s Door.’ Fans are divided, with some thinking it may have been a misidentification of ‘Romance in Durango,’ another Desire song.”

It’s possible a Salt Lake City recording simply doesn’t exist, but that doesn’t mean the campaign would be a waste of time. “I know two things for certain,” says dylyricus. “We’ll have fun searching for it and, even if we don’t find anything this time, I am confident we’ll discover others that are missing.”