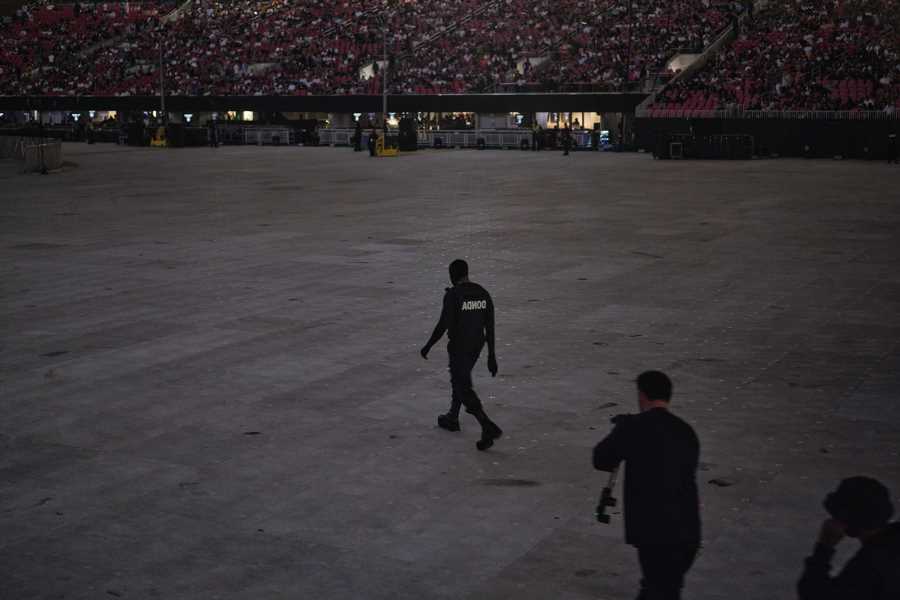 For the past several weeks, Kanye West has turned a hastily assembled studio inside of a sprawling sports arena into the world’s biggest open critique. Donda, the 21-time Grammy winner’s 10th studio album, remains absent from DSPs but the world has been privy to the process of its creation in unprecedented ways. Following his July 23rd event at Mercedes Benz Stadium in Atlanta, Kanye has been holed up in the arena making alterations to the long-delayed album. Anticipation, meanwhile, has bubbled. West’s complicated career seems at a pivotal moment. The rapper has, in recent years, taken on an ecclesiastical bent. Last night, as the dome of the stadium opened, young people either circled West or crawled to him like devoted parishioners. Had the clouds rained on the heart of Atlanta that evening, Kanye West, like Noah, might have had himself his very own ark.

Kanye West's 'Donda': Everything We Know About New Album

By now, it’s fair to describe Kanye’s Donda rollout as something of a Mercedes-Benz Stadium artist in residence. Kanye is a noted perfectionist, and this process, while frustrating to many fans, is decidedly self-assured. The false starts and delays are part of the process, whether we like it or not — even Kanye’s penchant for theatrics has a role to play. The two listening events make legible the real work that’s been done on the album in just a few weeks.

In the center of the arena, dancers draped in all black later reveal themselves to be “disciples.” They trade exchanges with others who come off as beggars, adorned in drab earth tones. The trained eye spots a disciple gesturing a prayer with both of his hands towards the metaphorical beggar. Meanwhile, West lay all 206 of his bones on the floor. Earlier, before rehearsals, he dragged, wheeled, or carried the bed he slept in while recording DONDA from his intimate quarters to the city of Atlanta’s biggest domain. Some take to Twitter and Instagram to compare Kanye’s current belongings to Mohandas Gandhi’s.

“One of the producers on the album gave me a tip to come down and dance. It’s not going to be anything like the last show. He [Kanye] used Beyonce’s choreographer. None of the performers have clear instructions on exactly what we are supposed to do,” one of the many dancers who wished to remain anonymous told me. “Kanye’s a super control freak. He will freak out if you wear the tiniest bit of white tonight. No white, no nothing. Everything is so strict. He’s constantly changing things, too,”

The first song finds Pusha T and Kanye West awake and aware of God. Kanye raps: “Every time I get the food, I just want the fries,” while Pusha boasts in biblical terms: “Got 12,000 acres of holy mountains.” Elsewhere on the updated album, the choir sample on “Praise God” has been cut. The mix on “Junya” is vastly improved and is not as long. The new drums don’t resonate as well as they could on “Jonah” this time around, and Kanye invites Kid Cudi to add vocals onto “Remote,” but removed the distorted drums that made “Robocop” an enjoyable listen. “New Again” brings Graduation highlight “Flashing Lights” to mind. “Pure Souls” gets drums this time around, which is what fans have all asked for. There are a few peak-Kanye bars throughout. One standout, “reaching for the stars like Buzz Lightyear,” was particularly memorable. The songs still feel unfinished. You can tell Mike Dean has his work cut out on “Keep My Spirit Alive” when it comes to adjusting Kanye’s vocals.

But it’s clear that Donda is a lateral move for West. “Jesus Lord” finds him delivering one of the more impressive verses of his career. “Lord, I Need You” features his most honest verse about his relationship with Kim Kardashian. Sonically, West is both guided by his oeuvre and by experimentation. The sample on “Hurricane” outdoes the organ, although The Weeknd delivers a quality contribution. Much like the first event, Kanye finds a way to be as topical as a late-night host. He enlists newly minted king of NYC rap Jadakiss for a verse on a track featuring Jay Electronica. For his part, Jada definitely understood the assignment, rapping: “They got their eye on me / I got my eye on Him.”

In much of Kanye’s first christening of the Donda listening experience, he wandered the floor, held his fist up, and occasionally knelt on his hands and knees to pray. Now more comfortable than before, Kanye found it within himself to perform push-ups in front of 40,000 fans, dance, collapse, and even levitate as the evening waned into white-hot fuzzy feelings, eerily mirroring the promotional Yeezus tour poster. Callbacks in hip-hop are mostly limited to lyrical channels so to gawk at this proverbially tasteful wink is more than a sweet sight for sore eyes, it represents a kind of synergy between artist and fan, both eager to see a return to Yeezus-era Kanye. “I’m from Miami. I’m here for 24 hours. I want to see the old Ye,” a fan said in passing, grinning. 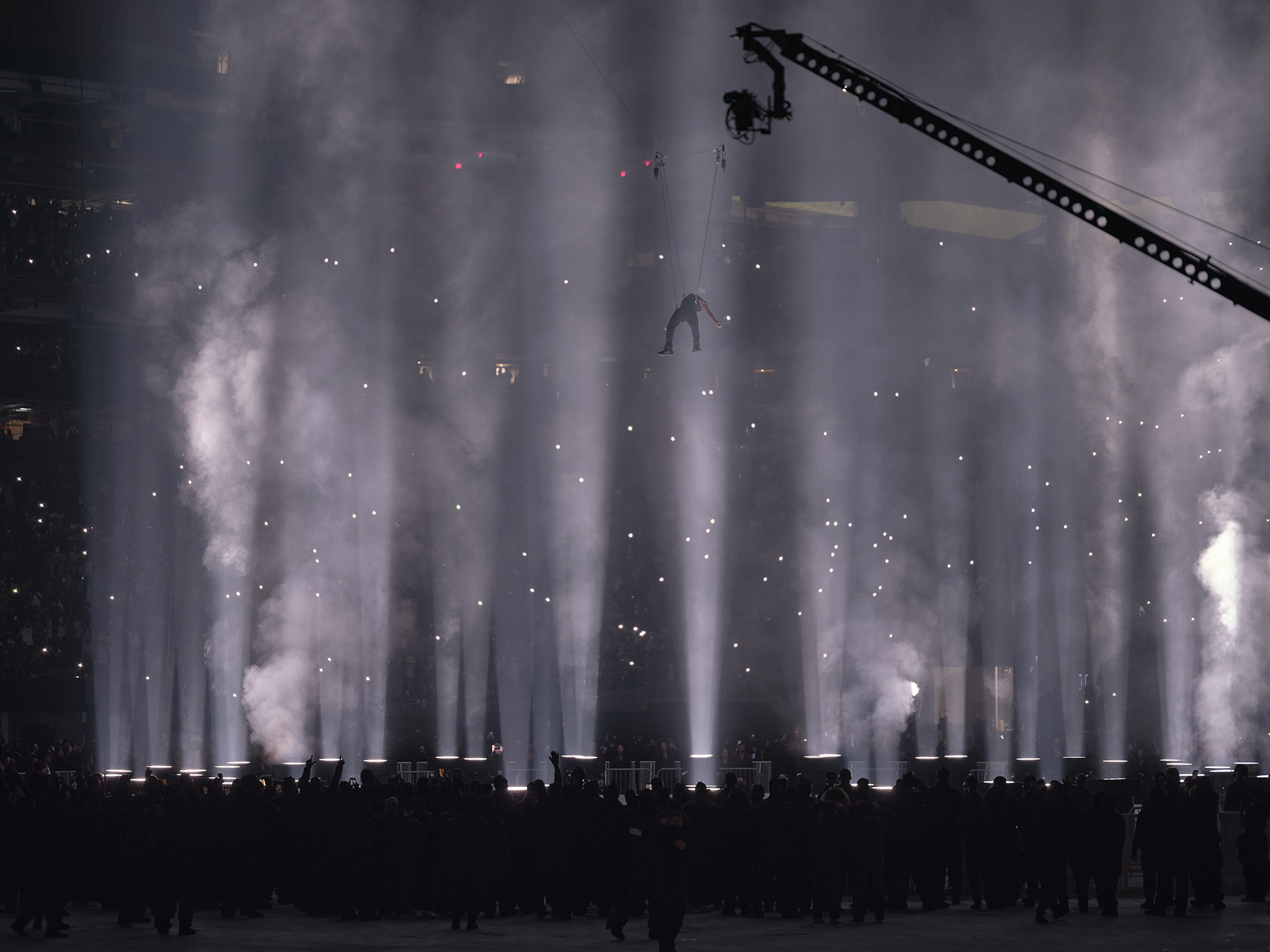 In just two weeks, Kanye has indeed “fixed” Donda. His residency at the Mercedes-Benz Stadium in Atlanta has clearly served him well. The album isn’t out just yet, it still needs some final tweaks to the mixing and transitions, but it’s definitely close. Today, Kanye is all over the iTunes store and the platform is advertising a Donda pre-order. His Gap collection is available for pre-order as well. One wonders if the theatrics around the release is a means of testing Kanye’s true fans. Perhaps Kanye is simply seeking out his true believers. When Donda finally arrives on streaming, will you?