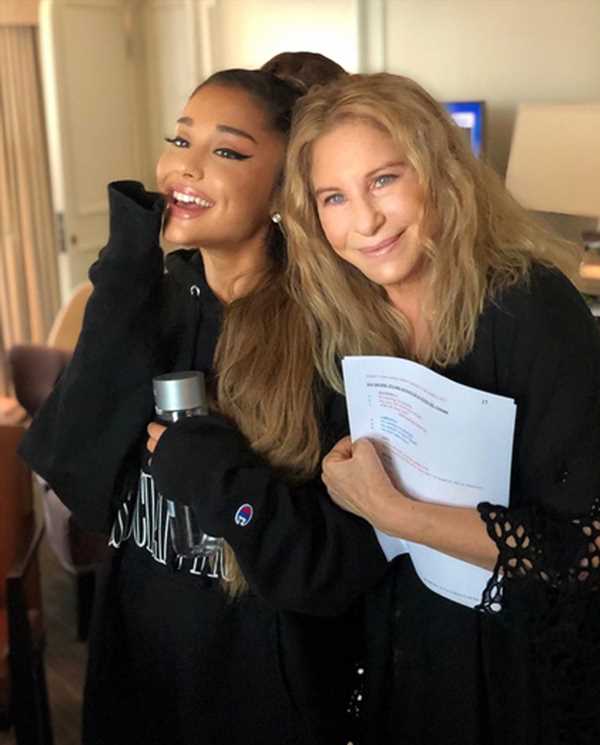 On Tuesday night, Ariana Grande performed with her idol, Barbra Streisand, during the legendary singer’s concert at the United Center in Chicago — and could not stop fan-girling over the 77-year-old music icon.

After Streisand bought Grande onstage, the pair performed “No More Tears (Enough is Enough),” a 1979 duet originally recorded by Streisand and Donna Summer.

A source told PEOPLE that the pair received a standing ovation as the crowd “went wild.”

“The entire theater turned into a dance party immediately,” the insider continued. “The whole place got up. It was a mosh pit.”

After the concert, Streisand captioned an Instagram photo of herself with Grande, 26, and wrote, “Secret’s out. Thank you @arianagrande 🖤🖤🖤.”

On Twitter, Grande couldn’t contain her excitement, writing, “hello shaking and crying. thank u @BarbraStreisand. don’t have words yet goodbye.”

“Cherishing this moment forever @BarbraStreisand,” she added in a second tweet, alongside a photo of the two.

The source told PEOPLE that “No More Tears (Enough is Enough)” was an “obvious choice” for the duo to sing, as Grande has “been singing it since [she was] a baby.”

“Barbra and Ariana, they got along like a house on fire,” the source added.

Earlier in the week, Streisand sparked rumors that the pair might be collaborating when she posted a photo of her and Grande’s hands on Instagram.

“Made a new friend…” she captioned the cryptic image.

The concert comes soon after Grande met another one of her idols, Jim Carrey, while on the set of his show Kidding, where she will be making a guest appearance on the upcoming second season.

In a touching social media post last week, the singer raved about Carrey — sharing a photo of herself and the actor, 57, hugging on set.

“There aren’t words,” wrote Grande. “I’ve been staring at my screen and no words do this moment justice.”

“Thankful for the most special experience of my life,” she gushed. “Nothing is crazier than getting to work with and spend time with someone whom you’ve idolized and adored since before you could speak. Actually, what’s even crazier is discovering that person to be more special and warm and generous in person than you ever could’ve imagined.”

Grande concluded the heartfelt post and said, “I have so much more to say but words actually can’t …. cover it.”