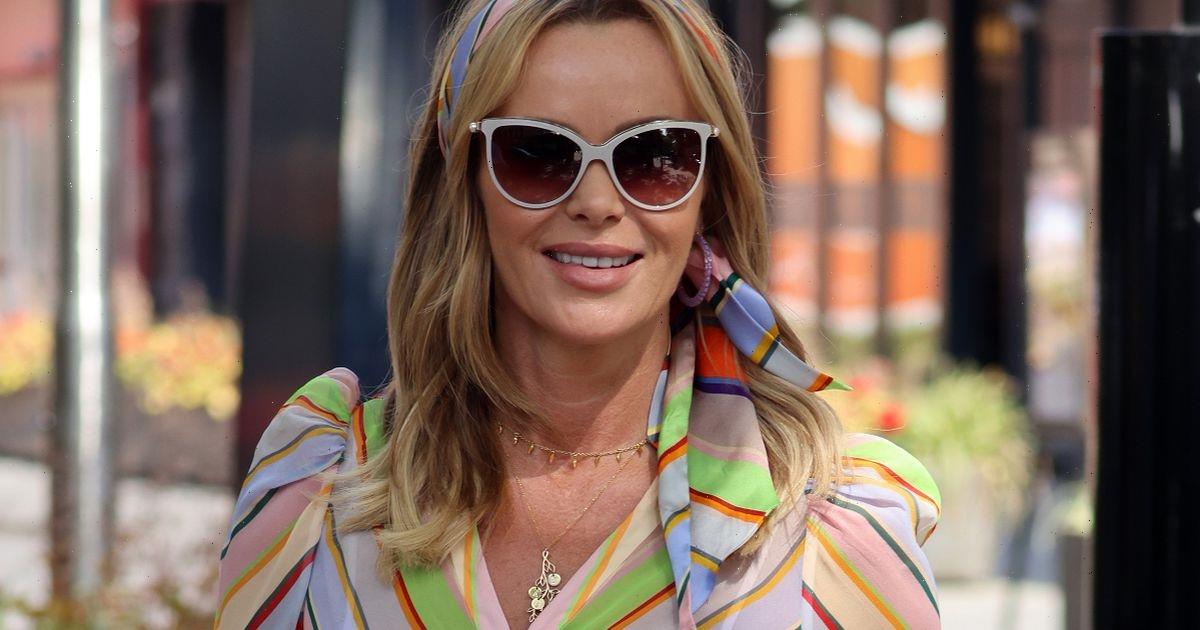 Amanda Holden was the spirit of summer today as she left the Heart FM offices in a bright multicoloured summer outfit.

Amanda wore a short sleeved dress with multicolour stripes and a matching head scarf with a white framed pair of sunglasses.

The dress left little to the imagination as she appeared to ditch her underwear under the skimpy patterned dress, flashing her assets as she walked through the sunshine in London.

Amanda's famous figure stole the show in the clingy dress as she paired with orange heels to strut her stuff, stealing the show in front of the cameras.

The retro 40’s style dress comes from LK Bennett and costs around £400.

She also posted a photo and video of herself in the outfit via her Instagram story from the Heart offices this morning.

The first was a video of herself strutting towards the camera through the heart offices, while the second was a photo of herself posing in the dress.

Amanda has also been posting about her recent distaste for the four week extension to UK lockdown rules, sharing a video of Theresa May at the house of commons speaking out about her desire to open the country back up.

Many followers agreed with her, with some claiming “our freedom is being taken away”

Amanda also shared a video of herself from the football game against colleague Ashley Roberts at the Heart FM offices yesterday where she fell over while trying to tackle the former Pussycat Doll.

In the one on one match Amanda ran towards the ball but suddenly lost her footing, slipping onto the floor as commentator Jamie Theakston quickly narrated the blunder.

Jamie said: “Goodness me! A flying two-footed tackle from Amanda Holden early on, I’m surprised she’s still on the pitch! She should have been sent off for that.”

After Amanda fell, Ashley was quick to race off with the ball but in the end Amanda won the match by scoring into a wide open goal later on, securing her the victory.

Sharing the clip to her Instagram account, presenter Amanda captioned the video: “I think that’s a red card for me”

Fans and celebrities alike commented on the video to laugh and share their love for Amanda with Ashley Roberts commenting: "sliding into the new week like…"