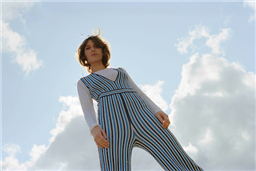 Prior to the pandemic, Aldous Harding was closing her live shows with the unreleased song “Old Peel.” Now, the New Zealand singer has officially dropped the track as a one-off single, paired with a new video.

Harding co-directed the clip with her longtime collaborator, Martin Sagadin. It features the band in a cozy room as Sagadin dances chaotically in front of the mic and Harding sits close by on keyboards.

Harding will release “Old Peel” as a seven-inch single on July 9th, with a B-side that features an acoustic version of the track. The single follows her 2019 LP Designer.

Following a spring trek through Europe and the U.K., Harding will tour North America in summer 2022, kicking off in Chicago on June 3rd. She’ll make stops at venues that include New York City’s Webster Hall (June 9th) and the Wiltern in Los Angeles (June 24th) before concluding in Lawrence, Kansas, on July 2nd. Tickets go on sale Friday at 10 a.m. ET.