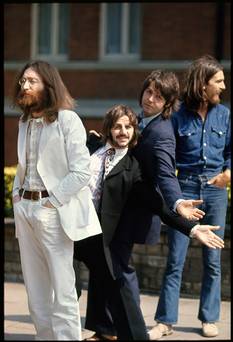 Frank Sinatra was never one to do things by half and when it came to praising the stuff he loved, he was quick to reach for the superlatives. And that’s what he did when he heard one track in particular from Abbey Road, the final album The Beatles recorded together.

The song that stopped him in his tracks was ‘Something’, the second number on side one. Written and sung by George Harrison, Sinatra suggested it was “the greatest love song of the past 50 years”. Ol’ Blue Eyes would perform it many times in future performances.

It is now seen as the song that heralded Harrison’s songwriting ascension to a level approaching that of Paul McCartney and John Lennon and it’s generally reckoned to be one of the three most frequently covered Beatles songs – alongside ‘Yesterday’ and ‘Blackbird’.

And yet, it almost didn’t appear on the album. Harrison had got so used to playing third fiddle to his illustrious bandmates in the songcraft stakes that he gave the song to Joe Cocker, who subsequently recorded it for his second album which was released at the end of the year. But Harrison’s version got out of the gates first – and Abbey Road is all the better for it. John Lennon – who was never afraid to criticise his bandmates and his own work – regularly suggested it was the best track on the album.

And what an album Abbey Road – which turns 50 at the end of this month – is. Let it Be may have been the final album released by The Beatles (in May 1970), but it was mostly recorded before the band convened for the Abbey Road sessions. And it’s that album – named, of course, after the now mythical London studio where virtually every Beatles song was recorded – that captures the quartet in their final flush of glory.

Listening to it today, half a century after its release, and it remains a remarkable document from a most extraordinary band. While there had been pressure and acrimony for two years prior to its release – one that began on the tortuous sessions for the White Album, you’d never tell that from the resulting songs. This is not a band going out on a whimper, but rather saying adieu at the very peak of their powers.

Several of its tracks are so thoroughly engrained in the rock firmament that it is difficult to imagine them not in existence. Opener ‘Come Together’ is all about Lennon’s appreciation for harder-edged rock and sonic experimentation – what an extraordinary opening few seconds.

‘Here Comes the Sun’ is the second great Harrison moment on Abbey Road – a sweet song that hints at the troubles in the band on the “it’s been a long cold lonely winter” line. The youngest Beatle – perhaps sensing the end was nigh for the group – could not have delivered a more optimistic song if he’d tried. Intriguingly, he released a companion song, ‘Here Comes the Moon’, on his self-titled eighth album some 10 years later in 1979.

And then there’s the 16-minute, nine-track suite on side two that’s surely the most famous medley in rock history. It’s the work of a band firing on all creative cylinders and delivering a mash-up of songs and fragments that laid down the gauntlet to their closest rivals. It’s worth remembering, too, that there’s no shortage of whimsy on Abbey Road. ‘Octopus’s Garden’ is nursery rhyme-pretty but is it also a paean to escape from its writer, Ringo Starr? And ‘Maxwell’s Silver Hammer’ – which, let’s be honest, is nobody’s idea of a great Beatles song – offers a glimpse of the sometimes maddening rabbit hole down which McCartney would descend when the mood took him in the 1970s.

It’s tempting to listen to every song on this album and wonder what might have been if they could have resolved their differences and continued as a force in the decade of Bowie, punk and disco.

Few would argue that Abbey Road is an artistically superior album to Sgt Pepper’s – released two years previously – but it wears its brilliance more lightly. Unlike its illustrious predecessor, it’s not straining for greatness. Abbey Road is the sound of four men with very little left to prove.

Let it Be, on the other hand, suffers from Phil Spector’s heavy hand in the studio and it wasn’t until years later, with the McCartney-instigated Let it Be… Naked release that we finally got to hear what the band had been after before the Wall of Sound pioneer got his mitts on it. It’s worth noting just how young they were when they went into the studio together for the last time. The eldest, Starr, was 29. Lennon was 28, McCartney 27 and Harrison 26. Let those ages register for a moment. One of the most significant artistic ensembles of the 20th century were all under 30 when they recorded together for the last time. In fact, none had reached the big Three-O by the time Let it Be – their 12th studio album – was released the following summer, a month after they officially called it quits. Remarkable.

What’s also worth pondering was how fast their evolution happened. If Abbey Road was the distillation of a myriad of influences that had informed their music up to that point, it arrived just six-and-a-half years after their debut album, Please Please Me. Today, it’s not uncommon for artists to let six years or more elapse between albums, but from 1963 to 1969 The Beatles helped redefine just how expansive and thrilling popular music could be. They went from earnest bandwagon-jumpers to mind-bending sonic visionaries, whose impact on culture will never be fully realised.

Of course, it’s impossible to write about The Beatles and not mention the impact of George Martin. The producer had been there with them for those initial recording sessions after they had honed their craft by relentlessly playing in places like Hamburg, and he was there at the very end, too when the thought of performing live on tour was anathema to a band long driven off stage by fan hysteria at the tail end of Beatlemania.

It’s Martin who helps make Abbey Road’s medley such a dazzling achievement and his genius was to embrace Lennon and McCartney’s numerous flights of fancy while also reining in their excesses.

There’s a newly remastered 50th anniversary edition of the album and much of the commentary around its release has centred on how fresh Martin’s production still sounds.

It’s fitting, too, that part of the album’s cheery finale – and the last they recorded together as a quintet – was called ‘The End’. It features alternating guitar solos from McCartney, Lennon and Harrison and a drum solo from Starr. It was the sound of four men showcasing some of that magic that they each brought to the band while also signalling a new future – one spent largely apart.

A word, too, on the album cover – one of the most celebrated in music history. Few images have ever been replicated as much. Is there anyone who visits Abbey Road studios and doesn’t ask a friend to photograph them crossing the zebra crossing that remains at that very same spot? The photo was taken by Iain McMillan – who was given 10 minutes to do the job while the police held traffic back – and it was McCartney who had the final say on the six prints that the snapper presented to him.

And it was art designer John Kosh – usually simply referred to as Kosh – who proposed that neither the band name nor that of the album be used anywhere on the cover. It was the first time The Beatles had taken this step, much to the concerns of EMI who thought the album wouldn’t sell without such information. “We didn’t need to write the band’s name on the cover,” Kosh said later. “They were the most famous band in the world.” Quite.

Their record company need not have feared. It sold four million copies in its first two months on sale and spent a total of 17 weeks at the top of the UK chart. It was eventually displaced by Led Zeppelin II, but its legacy will never be erased.