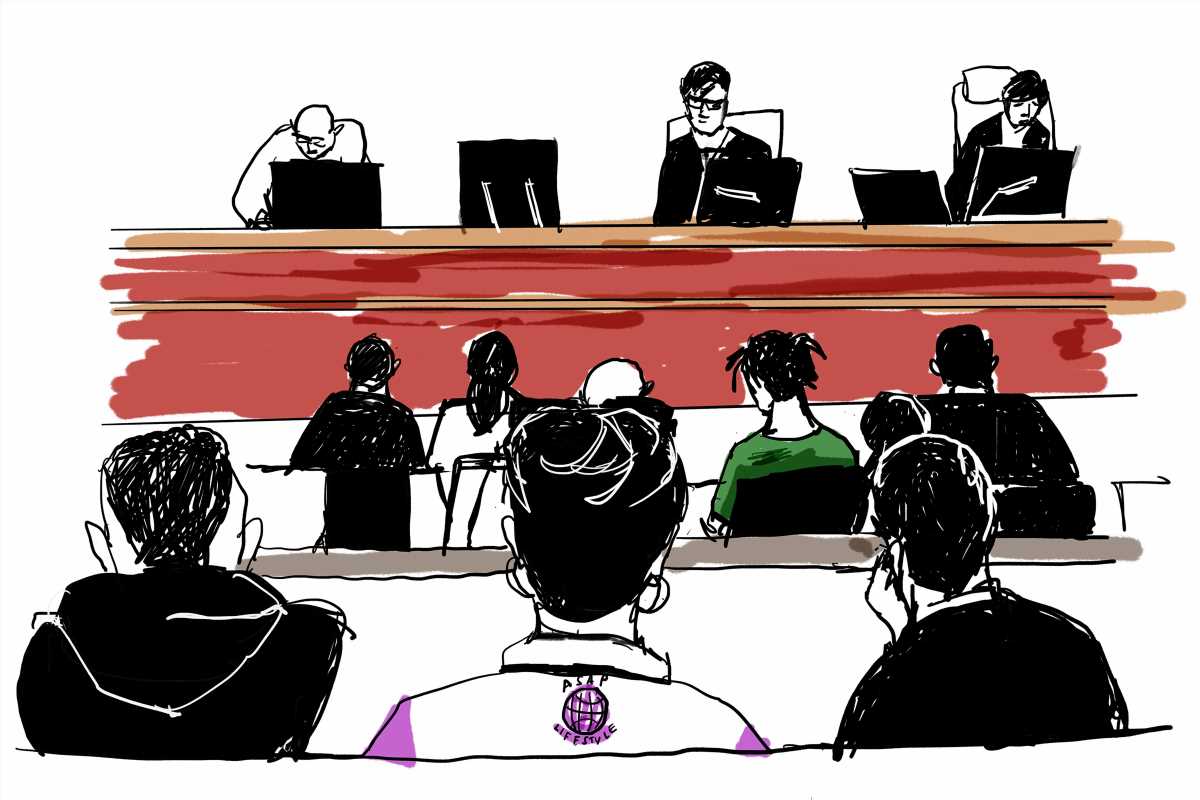 A$AP Rocky testified at his trial in Sweden Thursday that he tried to avoid an altercation with two men in Stockholm and that it was one of those men who started the fight with him and his bodyguards, The Associated Press reports.

Rocky — real name Rakim Mayers — and two associates pleaded not guilty to assault charges at the start of the trial Tuesday. The rapper allegedly threw a 19-year-old man, Mustafa Jafari, across a street during an altercation in Stockholm in June.

During his testimony, Rocky said that Jafari and his friend began following him and his crew, but refused to leave, even after being asked several times. “We wanted to defuse the situation and get away from these guys,” Rocky said, according to Reuters.

Rocky claimed that Jafari got into an argument with one of his bodyguards when the group stopped outside a fast food restaurant in order to download phone apps to use electric scooters located around Stockholm. “After a while, my security guard started pushing him away, begging him to leave, go from there,” he said. “Me and my crew told them that, listen, don’t go where we are going, go the other way, we don’t want any trouble.”

The rapper claimed that Jafari and his friend still wouldn’t stop following them, while he also added, “I assumed that these guys were under the influence of some kind of drug.”

When the fight eventually broke out on a nearby street, Rocky claimed he only entered the fray after Jafari and his friend attacked his bodyguard. “At this point I intervened,” he said. “I threw [Jafari] to the ground, and stepped on his arm, kicked him. I punched or shoved him.”

Per Reuters, A$AP Rocky added that the situation with Jafari had worried him because of several harrowing incidents over the past few years. He said his home had been robbed at gunpoint twice in the last two years, while last year he and his bodyguards were attacked by drug addicts in an Oakland elevator.

“We’re in a foreign country, we’re approached by two strangers with aggressive behavior,” he said. “Ten months ago when I was with my cousin… I was stabbed in my face by strangers.” He continued, “I don’t know what to expect when being attacked by strangers, that’s why I have security. At that moment I wasn’t thinking.”

Other portions of the testimony focused on whether or not A$AP Rocky or a member of his group used a bottle to attack Jafari, as the latter alleged in his testimony Tuesday. According to CNN, Martin Persson, a lawyer for Rocky’s co-defendant Bladimir Corniel, pressed Jafari when he returned to the stand about stills from video footage of the fight that did not seem to show anyone holding a bottle.

However, when prosecutors questioned A$AP Rocky, per TMZ, they brought up a text message sent by his assistant that read, “Harlem came out and smashed a bottle on a person,” suggesting “Harlem” was A$AP Rocky. The rapper again denied breaking or hitting anyone with a bottle, but acknowledged that he and his crew had picked up bottles in an attempt to stave off the fight.

Prosecutors also cited another text message from A$AP Rocky’s assistant that read, “I hope Rocky deleted all the videos on his phone and kept only the one.” Prosecutors reportedly seemed to suggest that Rocky deleted a video from his phone that potentially showed him using a bottle in the fight. In response, Rocky said he wasn’t involved in the text message conversation and said he posted the videos of the fight to his Instagram because they showed Jafari and his friend following him and being aggressive, whereas the first video that surfaced, via TMZ, only showed the fight.

On Tuesday, Jafari testified that he approached A$AP Rocky and his crew after being separated from his friend, and he wanted to see if the group had seen him. Jafari alleged that Rocky’s bodyguard pushed him, lifted him off the ground by his throat and broke his headphones. Jafari said he continued to follow the rapper’s crew after that to complain about the broken headphones.

Rocky’s attorney, Slobodon Jovicic, countered that Jafari broke the headphones himself. In a video of the incident A$AP Rocky posted on Instagram, one of the two men can be seen throwing a pair of headphones at Rocky’s bodyguard. Jovicic also claimed that Rocky and his group feared that Jafari would hurt them, claiming he allegedly followed them and displayed signs of violence.