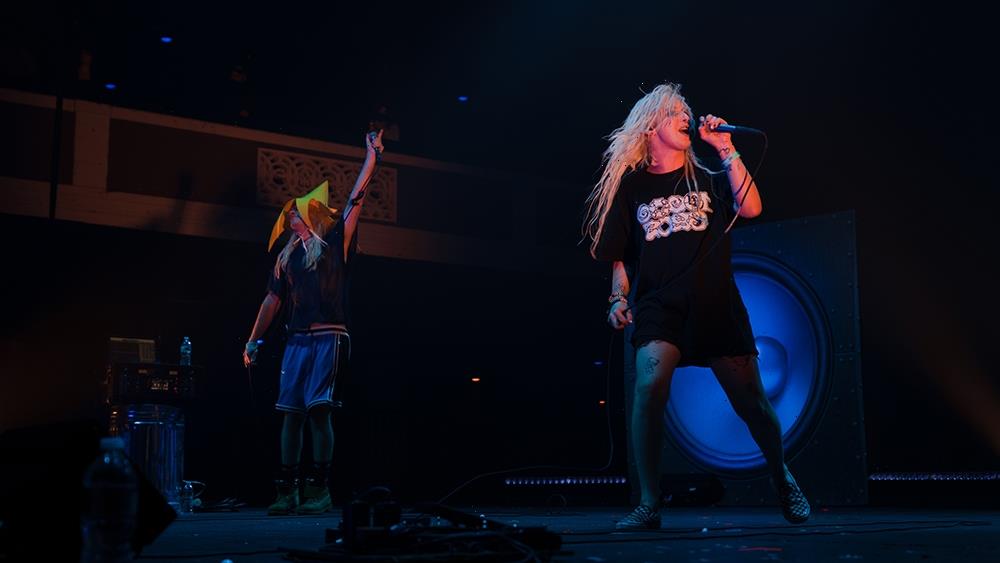 The phenomenon that is hyperpop inherently implies a mixing and mashing of genres, or perhaps the desire to transcend restrictive structures altogether — an ethos that was exemplified to a tee by 100 Gecs at their Los Angeles show on Saturday night.

The duo, consisting of Laura Les and Dylan Brady, packed the Shrine Auditorium with an eclectic mix of teenagers and 20-somethings, many of whom came dressed in costume (a Princess Peach, maid and human pride flag were spotted) or sporting one of Brady’s signature wizard-like hats (either brown and scarecrow-esque or bright yellow with a star-shaped brim). The nearly-full 6,300 capacity venue buzzing with excited fans underscored just how popular Gecs have become throughout the pandemic — they last played L.A.’s 275-person Moroccan Lounge in December 2019. Music industry players also came out in droves — among the crowd were hit-making producers Benny Blanco and Cashmere Cat, as well as fellow hyperpop artists Rebecca Black, Alice Longyu Gao and Moodkiller.

In line with their glitchy sound, Gecs have undoubtedly tapped into their own specific corner of the modern Internet age, one that both yearns for and rejects nostalgia at the same time. The crowd was a mix of people with their iPhones held high, desperate to document every moment, while others raised Nintendo Switches and Gameboys in irony. But the various technology wasn’t safe for long, as the crowd burst into a sea of jumping once Les and Brady took the stage, starting the set with unreleased track “Hey Big Man” from their upcoming 2022 release “10000 Gecs” (their 2019 debut was titled “1000 Gecs”; we sense a motif). With just two massive speakers adorning the stage, the duo took advantage of the open space by zig-zagging across the platform like pinballs, feeding off of the crowd’s hectic energy. The two came out dressed in wizard-like robes — Les’ blue with stars and Brady’s yellow decorated by musical notes — but they were soon taken off to reveal much more casual ensembles, though Brady kept his yellow hat on throughout the entire performance, covering much of his face.

Gecs kept the momentum going with “Stupid Horse,” one of the most popular tracks from “1000 Gecs,” followed by new track “757.” Though their instrumental setup originally consisted of solely Brady’s laptop (appropriately resting atop a trashcan), a xylophone was soon brought out, and Les and Brady banged on it viciously for several minutes before transitioning into “Ringtone,” which prompted a few different mosh circles from within the crowd. After playing two more unreleased songs, “Fallen 4 Ü” and “Hollywood Baby,” both drawing on pop-punk but infused with their signature electronic backbone, two acoustic guitars surprisingly appeared on stage. With Les and Brady doubling up on the guitar chords, the normally distortion-shrouded “Gecgecgec” transformed into an impassioned ballad, with Les showing off her voice as it turned into a near shout by the song’s end. “This is the craziest moment of my fucking life,” Les mused, which was met with cheers from the crowd.

Following Gecs’ stripped-down moment, the second half of the set went in the opposite direction, with Les unleashing screams that verged on death metal during “Handed Crushed by a Mallet” and unreleased track “Billie Knows Jamie.” For new single “Mememe” Gecs genre-hopped over to ska, paired with a harsh drum line that prompted head-banging from both those on stage and in the audience. Les yielded an electric guitar for yet another unreleased track, “One Million Dollars,” and then the duo appropriately ended the set with “Money Machine,” their most-streamed song to date that also had a viral moment on TikTok — no doubt adding to Gecs’ success over quarantine.

But the crowd was not letting them go without an encore — chanting “Gecs! Gecs! Gecs!” at the top of their lungs until the duo appeased them with unreleased song “What’s That Smell” (which has already been hailed by fans after being teased at Gecs’ Minecraft event last year) and “800db Cloud,” during which Les once again let out gravelly, impressive screams.

Even when the duo walked off stage for a second time, hundreds stuck around in hopes of a rare second encore — with shouts of “Gecs!” ringing out in the distance as others exited — albeit to no avail. But the fans’ dedication is any indication, next time the duo plays L.A., it will be at the Staples Center — which, by that point, will have been renamed as  the very on-message Crypto.com Center.