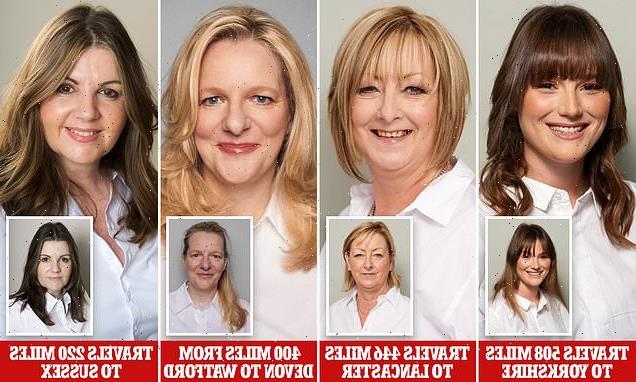 Would YOU travel 500 miles for a haircut? They all cover vast distances after moving far from the only salon they can trust. Now take a look at the very expensive results

Every six weeks, Laura Mills leaves her home in Sussex and braces herself for a 508-mile round-trip to Yorkshire. She knows rationally she should finish this long-distance relationship, but she’s in so deep she simply can’t bear to end it.

Yet this isn’t, as you may imagine, a tale of romance. It’s a journey she’s been making for the past nine years all in the name of getting a haircut at her favourite salon.

In the nine hours it takes her to get there and back, she could fly to Barbados, Florida or Dubai — and at £200 for a full-price train ticket, a flight might not actually cost much more.

Though it may sound hare-brained, Laura is adamant it’s worth it to maintain the trademark long fringe she has had since childhood. Though she has flirted with other hairdressers over the years, none has come close to being able to cut it the way her stylist at Fred & Olive in the village of Dodworth, near Sheffield, does.

‘I’m very particular about my fringe, it’s my safety net and as quite a shy person I hide behind it, so to have it cut badly would be a disaster,’ says Laura, 30, a district nurse.

She grew up in Worthing, West Sussex, but went to university in Sheffield before returning to her home town when she graduated aged 21. 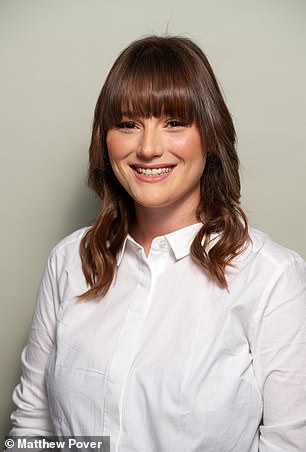 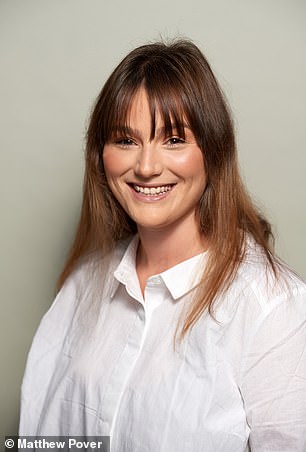 Fringe benefits: Laura Mills travels 508 miles from Sussex up to Yorkshire for a hair cut. In the nine hours it takes her to get there and back, she could fly to Barbados, Florida or Dubai — and at £200 for a full-price train ticket, a flight might not actually cost much more 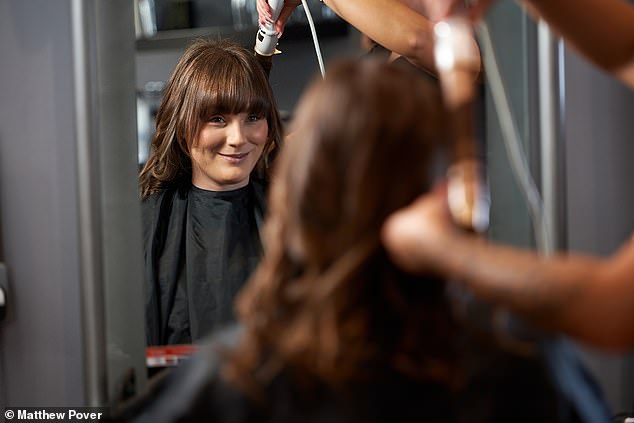 Every six weeks, Laura Mills (pictured) leaves her home in Sussex and braces herself for a 508-mile round-trip to Yorkshire. She knows rationally she should finish this long-distance relationship, but she’s in so deep she simply can’t bear to end it

‘At school I just went to the same hair salon as my mum in Worthing, but I had to find a new one when I moved to Sheffield,’ she says. She tried several, including some offering walk-in student appointments for £10.

‘One of them cut my fringe far too short and I didn’t feel like me. I was living in Dodworth at the time, and when Fred & Olive advertised student discounts I gave them a try and immediately felt comfortable. Some salons can be showy, but it’s not like that there. It’s lovely. Most importantly, they cut my hair perfectly every time.’

Making the trip eight times a year represents a huge commitment of time and money. But for many women, finding a hair stylist they trust can be just as crucial as finding the right life partner —sometimes more so.

A study at Yale University, in the U.S., discovered there are measurable psychological effects of having bad hair, including a decrease in belief in your own abilities and increased feelings of insecurity and self-criticism.

On the flip side, having a good hair day also has a powerful psychological impact. According to a recent study at Stanford University’s Graduate School of Business, simply believing you look your best can make you feel like you belong in a higher social class.

A hairdresser who really understands your hair is someone who ‘gets’ you, too.

At first Laura would drive to Sheffield, leaving home at the crack of dawn for a late morning appointment. Then she would travel by coach, a round-trip that took more than ten hours.

These days she travels by train, a trek that still takes up to four-and-a-half hours each way.

‘At the start of the year, I’d left my hair longer than usual between appointments as I’d been so busy during December, so I rang the salon one Friday and asked if there was any chance they could fit me in the next day,’ says Laura, who is single. ‘As a result, my train ticket cost £200, double the price if I book in advance.’

The haircut itself — she has never coloured her hair — costs £60.

She has had her fair share of horror journeys, including heavy snow in Yorkshire and a missed appointment after spending seven hours on the M1 because a broken-down car blocked the carriageway. ‘It’s all worth it though,’ she says.

Helen Ashton also travels for hours to have her hair done. But, unlike Laura, she mixes up cuts and colours. And the only stylist for the job happens to be based in Lancaster city centre, 223 miles away from Helen’s Wiltshire home.

‘Sometimes I want my hair blonde, then dark, then long, then short,’ says Helen, 58, who works for TV presenter Julia Bradbury and her sister Gina on The Outdoor Guide. She’s married to Brian Ashton, the former England rugby head coach. 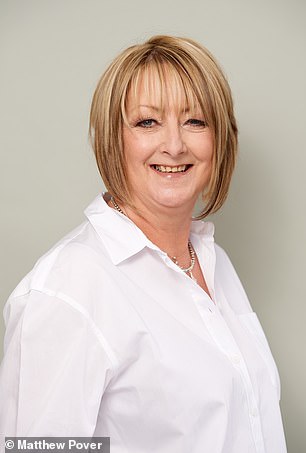 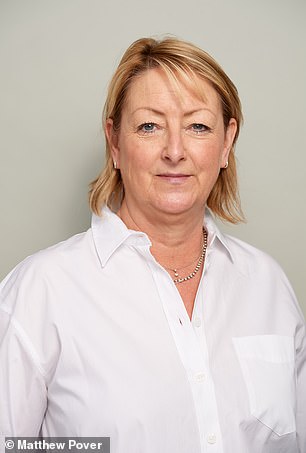 Price worth paying: Helen Ashton visits Lancaster, 446 miles away from her home 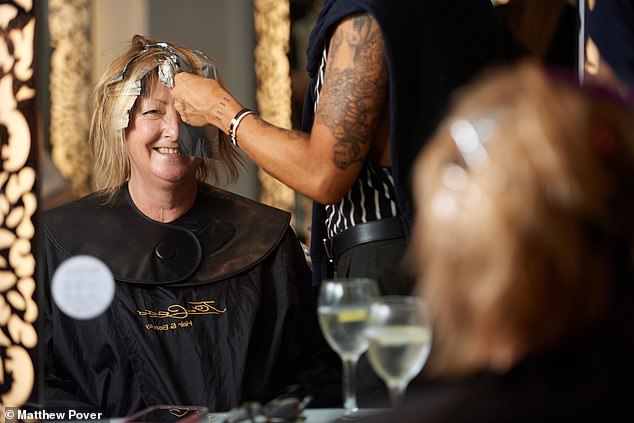 Helen Ashton also travels for hours to have her hair done. But, unlike Laura, she mixes up cuts and colours. And the only stylist for the job happens to be based in Lancaster city centre, 223 miles away from Helen’s Wiltshire home

‘We used to live in Lancaster and still have a flat there but several years ago I moved to Wiltshire to be close to my two daughters who were both having babies.’

There was no question of Helen breaking up with her long-term hair stylist, Liam, however.

‘I’ve been with him for eight years and all I can say is that he gets me, and he gets my hair. He works his magic on it whatever state it’s in at the time,’ she says. ‘A woman’s hair is intrinsic to her self-esteem. If my hair looks right, then I feel right. It would be hard for me to part company with him now.’

Still, a 446-mile round-trip comes at a price. Helen forks out £90 — and rising — on a full tank for her Range Rover Evoque, before she pays around £100 for a cut and colour.

She makes the trip every six weeks, which equates to around £1,560 and 3,544 miles a year. Liam regularly juggles his diary at the salon, Jo & Cass, or stays late to accommodate Helen.

‘My satnav tells me the journey will take three-and-a-half hours but it’s always longer. The longest was six hours one-way because of a series of accidents,’ Helen adds.

‘Liam knows I don’t want to be pushed into a boring hairstyle as I get older. I still want to be “with it”. There’s actually a great hairdresser in my village in Wiltshire who my friends go to, so they think I’m mad. But while I’m physically able and can afford it I’ll keep going to Liam.’

As for her husband, Helen says he’s very supportive: ‘Brian’s never rolled his eyes about my hair appointments. He’d never do that. He loves keeping me happy!’

Until last year, construction office manager Lisa Knighton only had to cross the road from her office in Watford, Hertfordshire, to get to her favourite salon of ten years, Hair Connections. Now it takes her between three and five hours to drive there every three months from her new home in Devon.

Lisa, 52, who has three children, moved there last year after the breakdown of her marriage. But there was no way she was also splitting from her trusty hairdresser Sophie as well. 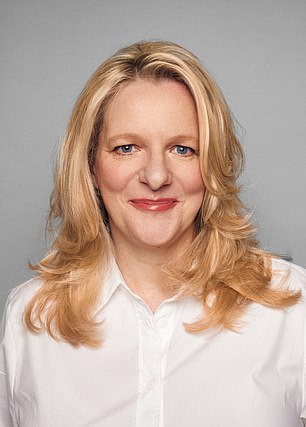 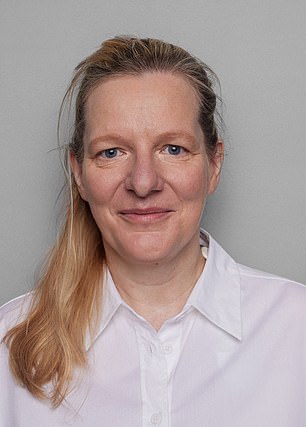 Indulgence: Lisa Knighton drives the 400 miles from Devon to Watford 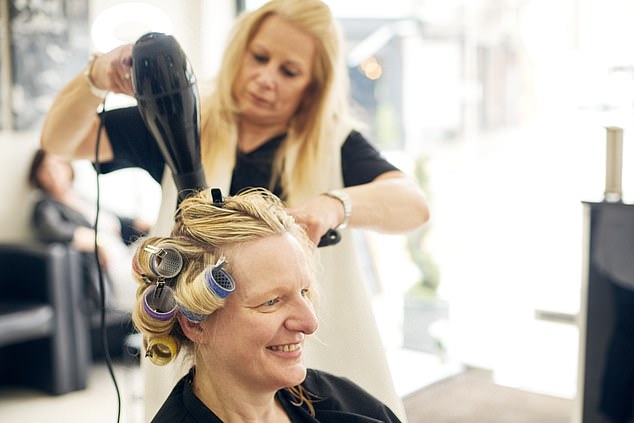 Lisa, 52, who has three children, moved to Devon last year after the breakdown of her marriage. But there was no way she was also splitting from her trusty hairdresser Sophie as well, and makes a 400 mile journey to Devon to get her hair done

‘There are two hair salons in my Devon village, and I work in nearby Exeter, which has a good selection, but nothing can persuade me to part with Sophie and the salon she owns with her sister.

‘Whatever I throw at my hair between appointments, Sophie comes to my rescue, including when I grew it long then had it cut off for charity, and the time I used an at-home blue wash-in-wash-out colour which turned green. She always makes sure I leave the salon feeling a million dollars.

‘But it can be a nightmare. It took me five hours to get there earlier this year thanks to traffic problems. I now try to make it an indulgent trip, booking into a cheap hotel the night before so I can catch up with my 21-year-old daughter or old friends.’

All this sets Lisa back at least £233 — £75 for fuel in her Vauxhall, and £158 for a cut, highlights and colour. ‘Money’s tight, and I could pay a fraction of the price to have my hair done locally in Devon but finding a new hairdresser would be like dating again and knowing that it might not work out,’ says Lisa.

‘I’d rather know my hair is in safe hands. It’s an investment and never once have I come away from Sophie’s salon and not felt great.’

It’s a point business consultant Emma Clayton instils in her clients — customers will pay for quality. It’s also the reason that every few months for the past four years she has made the 220-mile round-trip from her home near Witney, Oxfordshire, to the Oliver Cunningham hair salon in Cuckfield, West Sussex, for a cut and colour with stylists Oliver and Lou, who both trained with legendary hairdresser Trevor Sorbie in London. 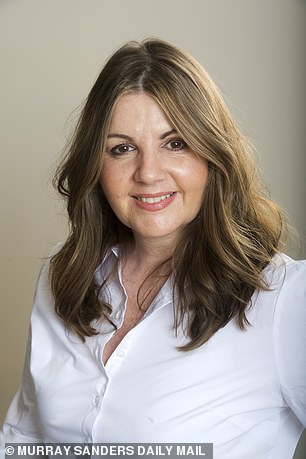 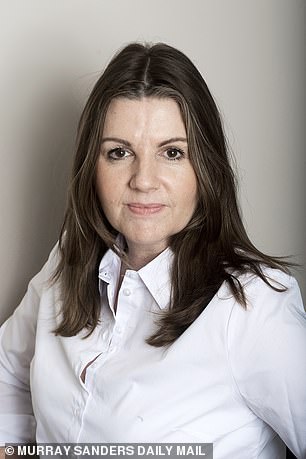 Investment in myself: Emma Clayton heads 220 miles to Sussex 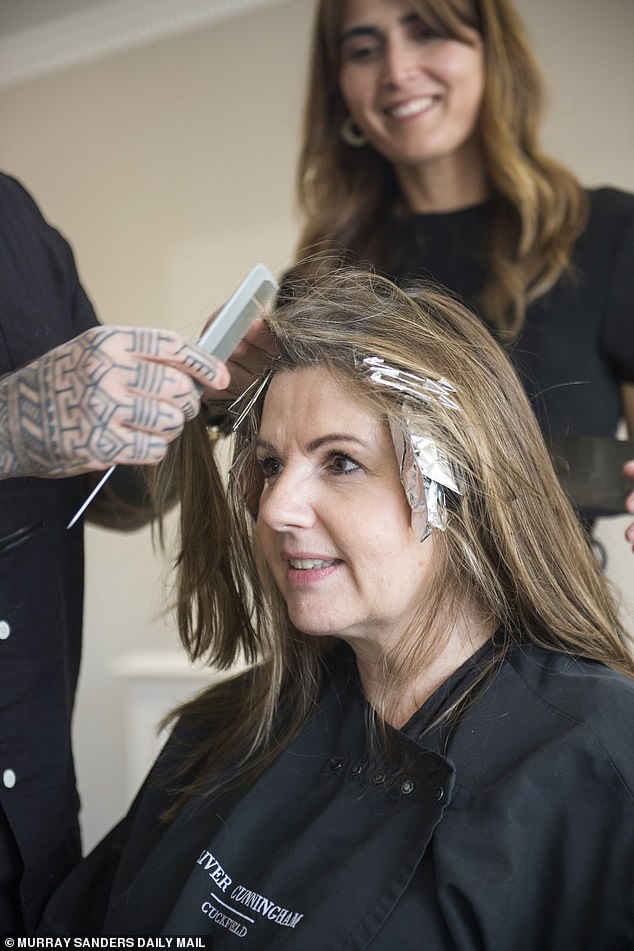 Every few months for the past four years Emma has made the 220-mile round-trip from her home near Witney, Oxfordshire, to the Oliver Cunningham hair salon in Cuckfield, West Sussex

‘Each appointment comes at a loss to me financially,’ says Emma, 47, who is also a gender pay-gap expert and lives with her 13-year-old daughter.

‘It costs £80 for a cut and £140 for a colour, plus two-thirds of a tank of petrol, which is around £80 and rising. Then there’s loss of earnings because I have to take a day off work.

‘As a workaholic, this is a big deal, but I’m willing to do it because of the quality of the hairstyling.’

She had been having her thick, naturally curly, brunette hair tended to at the salon for two years before moving, and initially tried to find a new hairdresser.

‘I went to three different salons and ended up dyeing my hair at home at one point as none of them got it right. It was my daughter, who was only nine at the time, who said to me, “Mum, why don’t you go back to Oliver and Lou?” ’

Even a five-hour journey home through congestion on the M25 after one appointment hasn’t been enough to quell her enthusiasm.

‘I like to wear my hair straight and Lou knows exactly how to cut it and blow dry it in the most beautiful way so that it has lots of movement,’ she adds.

‘People think I’m bonkers and my friends who still live in Cuckfield joke that I make more of an effort to see my hairdressers than I do to see them. But my hair is an investment in myself so it’s worth every tedious mile on the motorway to get a style that makes me feel happy and confident.’