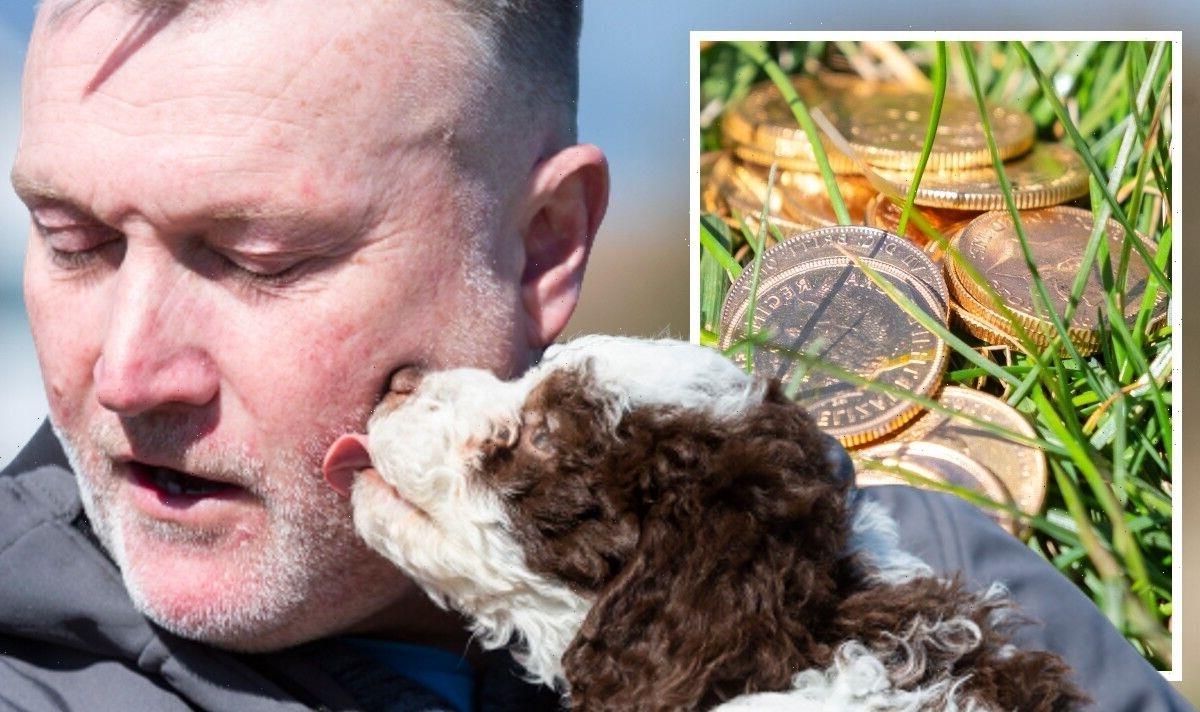 Worth his weight in gold, Ollie, a Lagotto Romagnolo, was just 10 weeks old when owner Adam Clark took him for a fateful walk near Blackpool. The puppy was bought by Mr Clark and his partner Kim McGuire as a surprise gift for their daughter Alicia last month.

The breed is well known for its ability to dig out much-prized truffles from the ground, and 10 minutes into his first outing, Ollie hit the jackpot.

Ollie managed to find 15 gold coins thought to date back to the 19th Century.

Mr Clark took the haul to Chards Coin and Bullion dealer who valued the pieces at £5,943.96.

The family are delighted with the find and have dubbed Ollie a “gold hunter.”

Speaking of his pride, Mr Clark said: “When we got him we thought he seemed special.

“Alicia was over the moon and we couldn’t wait to take him out for his first walk around the gala fields.

“We’d literally been walking for around ten minutes when Ollie suddenly stopped and started frantically digging away at the soil.

“That’s when he uncovered the pile of gold pieces.

“I couldn’t quite believe it.

“The treasure is one thing, but, the fact is, I’ve bought myself my very own gold hunter, and I cannot wait to take him out again.

“He is obviously a very special pup and I’m thrilled with what he brings to the table — quite literally.”

Mr Clark added he was in shock when Ollie uncovered the coins.

The family chose the breed as Mr Clark suffered from pet hair allergies, and the Lagotto Romagnolo was thought to be one of the best dogs to keep for the condition.

Adding to his joy, Mr Clarke said: “We got him from a breeder in Manchester and my daughter connected with him instantly, they’re best friends.

“He cost me £2,000 so after sniffing out the gold he tripled my investment, which is always a bonus.”

Ollie is not the only pet to stumble across a hoard of gold.

In California, a couple out walking their dog struck it rich by unearthing a horde of buried gold coins, worth more than £7.65m ($10m) according to experts.

The so-called Saddle Ridge find is believed to be the most valuable treasure trove ever discovered in the United States, according to Kagin’s Inc, which specializes in ancient gold coins.

The couple, named only John and Mary, spotted a partially buried can jutting out of the ground – and after further digging found seven more, with more than 1,400 gold coins.

The couple said they were simply taking their dog for its daily walk when they made the first find.

What do you think of this amazing find? Let us know in the comments section below, just CLICK HERE to join the debate – Every Voice Matters!

Elsewhere, in the Czech Republic, whilst out walking with his family in the mountains, a dog made an exceptional discovery; an incredible archaeological treasure dating back to the Bronze Age.

The Frankota family rushed to their dog, Monty trying to dig up the floor by frantically pawing at the ground.

He found an incredible collection of bronze artefacts.

The treasure included 13 sickle blades, 2 iron spears, 3 axe heads and several bracelets, all made out of bronze.

This discovery indicates, according to archaeologists, a ritual deposit.

The haul was handed over to local authorities and bagged Monty and his owners a £250 reward.