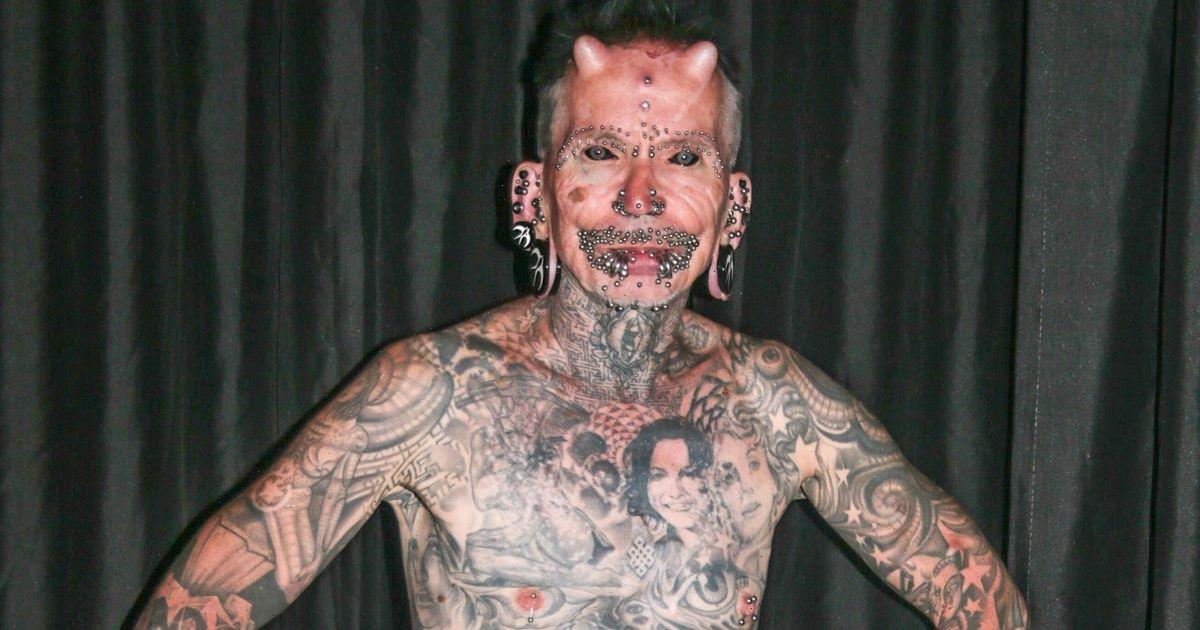 He's got at least 516 body modifications, including 278 piercings on his genitals alone.

And those staggering numbers are why 62-year-old Rolf Buchholz is in the Guinness World Records as the man with the most piercings and body modifications.

But there was a period when the German would barely have warranted a second glance if you'd passed him in the street.

Indeed, until he turned 40, the computer scientist from Dortmund looked the epitome of ordinary, as he's revealed via a couple of photos that show him before he started on his body-mod mission.

In one snap, Rolf can be seen emerging from the sea without so much as an earring impaling his flesh.

In another pic he can be seen at an equestrian show, looking fairly unremarkable in a large, bookish pair of specs and tucked-in pale blue shirt.

It's a far cry from his current look, with Rolf since getting large subdermal horns implanted on his forehead, his eyes tattooed black, his tongue split in two and 90% of body inked.

He freely admits to freaking many people out with his appearance.

"A lot of people think I'm the devil, but I don't believe I am," I said in one interview, before adding that he set about transforming himself simply because he "liked the modifications".

"So I started doing more and more."

He also told the Guinness World Records YouTube channel that he's proud of the titles he holds.

"It's something special and people look a little bit different at my body modifications since they've seen me in the book."

The only downside, he added, was the hassle he receives at airports, his piercings forever setting off the metal detectors and getting him stopped by security.

Rolf even claimed he was once denied entry to the United Arab Emirates whilst travelling to Dubai due to the way he looked.

"Those who escorted me back to the plane said that it was because I looked like I am into black magic," he said.