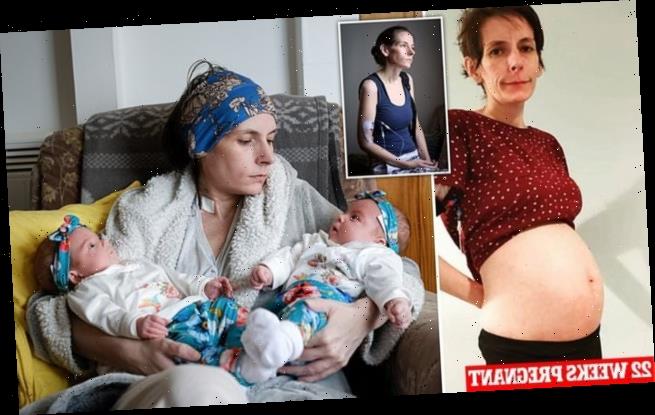 British woman, 40, who hasn’t been able to eat for a decade and has to be fed through a tube due to mystery illness she contracted after a holiday in Turkey gives birth to ‘miracle’ twins

A woman desperately hoping for a cure to her mystery illness has given birth to ‘miracle’ twins – despite not being able to eat or drink for the last decade.

Ann-Marie Williams, 40, from St Just, Cornwall, has spent ten years trying to find answers over an unknown sickness that has left her too ill to consume any food unless being fed through a tube.

But last year, while at rock bottom in the midst of a desperate search for a cure, she was left gobsmacked when doctors told her she was 18 weeks pregnant with twins.

And despite not showing any signs of a bump and having not eaten during her pregnancy without the help of an infusion pump, she gave birth to two healthy baby girls, Morwenna and Elowen, in January.

Ann-Marie’s problems started following a week-long holiday to Turkey. She fell ill upon her return with flu-like symptoms.

But since then, every time she eats or drinks, she is unable to keep it down, with her weight previously dropping to just six and a half stone. Ann-Marie is now raising funds to speak with private doctors who could potentially help with a cure. 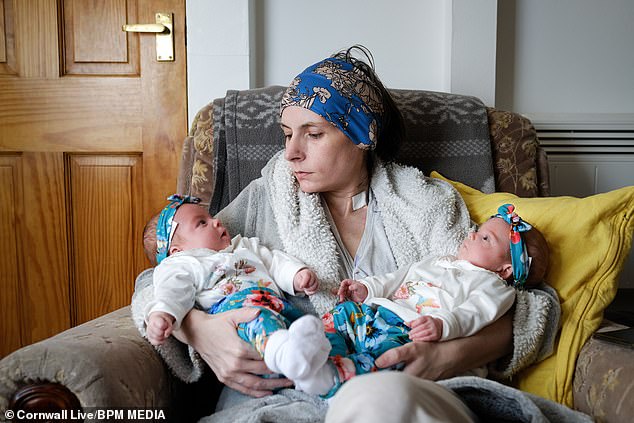 Ann-Marie Williams (pictured with her twins), 40, from St Just, Cornwall, has spent ten years trying to find answers over an unknown sickness that has left her too ill to consume any food unless being fed through a tube 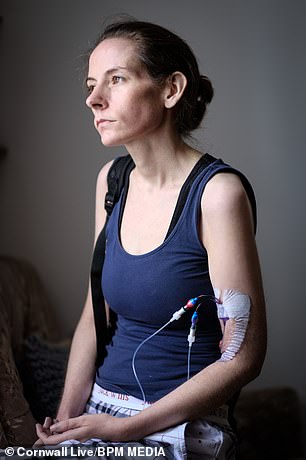 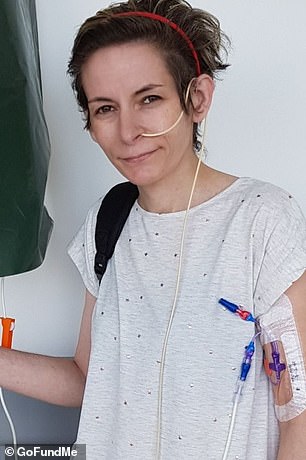 But last year, while at rock bottom in the midst of a desperate search for a cure, Ann-Marie (pictured) was left gobsmacked when doctors told her she was 18 weeks pregnant with twins

Speaking about the birth of her twins, Ann-Marie said: ‘It was an absolute shock, but a miracle at the same time. I missed a period in June and I did do a pregnancy test but it was negative so I put it down to my health and getting over sepsis.

‘I then had a blood test done and it was off but didn’t reveal I was pregnant. Some of my illness symptoms started to actually feel better at this time and I would have a few hours a day where I didn’t feel too bad which was strange, but I had no idea.’

For four years now Ann-Marie has been hooked up to a machine which keeps her fed and she finds every day to be a struggle.

But now, the mum-of-two is more hopeful than ever that she will find a cure in order to give her ‘miracle’ girls the childhood she had.

In the last year Ann-Marie has recovered from sepsis three times, been diagnosed with Covid-19 and gone through a C-section to deliver her surprise twins.

Last year, before news of the babies, she took the decision to move back home to Cornwall from Bristol to live with her parents as her health continued to deteriorate.

Now she is grateful for that decision as her parents and partner are the ones who provide most of the care for the babies because she is too ill.

Around 10 years ago, Ann-Marie went on holiday for a week in Turkey with her friends, but fell ill upon her return. What started out as just flu symptoms lasted around three days but then went away. 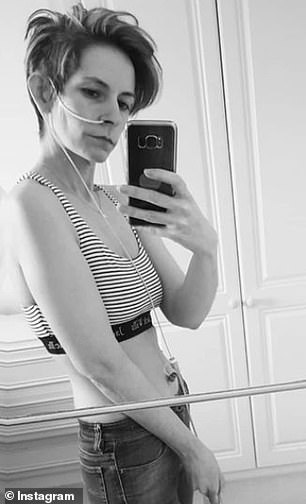 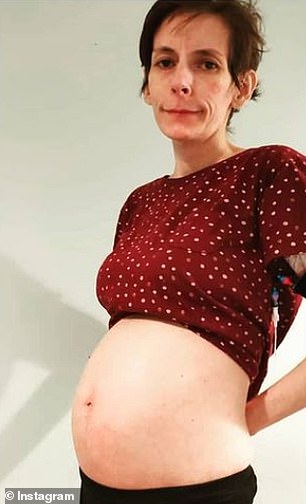 And despite not showing any signs of a bump and having not eaten during her pregnancy without the help of an infusion pump, Ann-Marie (pictured right, when 22 weeks pregnant) gave birth to two healthy baby girls, Morwenna and Elowen, in January

Two weeks later she felt sick again and it stayed. Since then, every time she eats or drinks something, she is unable to keep it down.

Ann-Marie said: ‘I started losing weight and went down to eight stone. The doctors just thought it must be something I’d picked up on holiday, but it didn’t go away.’

Over the coming years she tried countless medical tests, herbal treatments, and even a gastric emptying study, which showed a severe delay of her stomach and bowel.

After plummeting down to six-and-a-half stone she had a Total Parenteral Nutrition (TPN) line fitted. It pumps all the calories and nutrition she needs into her system so that she doesn’t have to eat or drink.

Remarkably, this is what also fed the twins throughout her pregnancy. Ann-Marie believes they could be the only babies ever exclusively fed in this way before birth.

Ann-Marie said: ‘I wasn’t showing. But I would have this bulge in my gut that would come out and then go again and I was in a lot of pain.’ 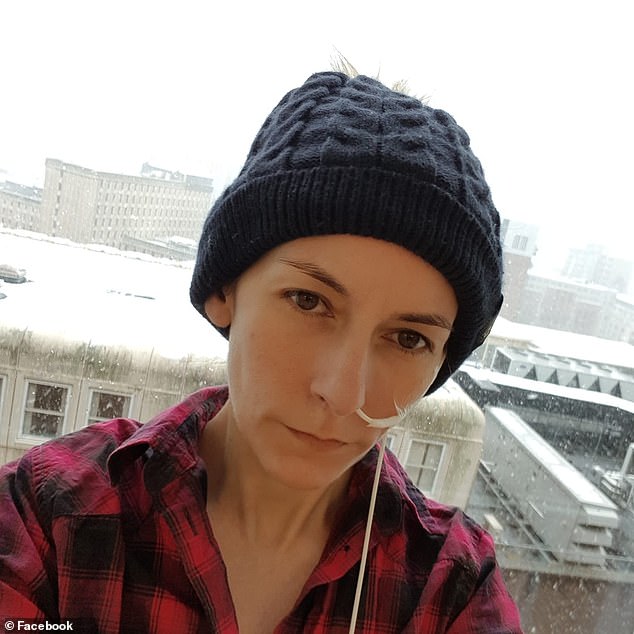 Ann-Marie’s (pictured) problems started following a week-long holiday to Turkey. She fell ill upon her return with flu-like symptoms

Doctors were worried and so she was taken in overnight for tests where a urine test revealed she was pregnant.

Ann-Marie said: ‘My mouth just dropped. That can’t be right I thought and then everything just dawned on me.

‘As [a nurse] told me, the doctor arrived to take me for an ultrasound and there was this pause and I just knew he was going to say it was twins.

‘I was in so much shock I was just crying and I couldn’t even look at the screen. I had no idea how to tell my partner and I told him later in the day and he couldn’t even talk.

‘I don’t eat or drink, I live off IV nutrition and these babies had survived that long. I didn’t even understand how it was possible.’

Later doctors told her that the intravenous feeder would not have impacted the babies as it had all the vitamins and nutrients that Ann-Marie needed.

Ann-Marie said: ‘Because I feel really sick all of the time I just assumed something was getting worse and then it got a little bit better, but I’m always extremely sick so I couldn’t have known.’

Having always wanted to be a mother, Ann-Marie admitted she can’t do a lot for the twins right now and it makes her cry every day.

During her pregnancy, Ann-Marie had a difficult few months and was admitted to hospital on December 8, where she remained for eight weeks before giving birth via C-section at 34 weeks.

Ann-Marie, who then contracted Covid-19 and was not able to be with her children for sometime, said: ‘They were put on feeding tubes after birth for a few weeks and then they were okay.’

She has since been communicating with private doctors and says there are some promising tests available that she will be signing up for in the hopes to find answers.

Ann-Marie said: ‘I’m trying to find a really specialist doctor and I’m at the point where I’m wondering if that person is even there, if they exist.

‘I have spoken to lots of doctors and alternative doctors over the years and they all say there are lots of things going on and my situation is so complex that nobody knows where to start.

‘It really frightens me that I’m never going to be the person I want to be for the twins and everyday I end up crying when I look at them. I had a great childhood and I want to do all those things for them and take them out in their pram.

‘They are so beautiful and I want people to be able to see them. I’m so worried that they don’t know who their mother is because I’m not able to provide all of that for them. All I can provide is cuddles and tell them I love them.’

To donate to a fundraiser in support of Ann-Marie’s search for a diagnosis, visit: https://uk.gofundme.com/f/8azyc-help-to-find-a-cure