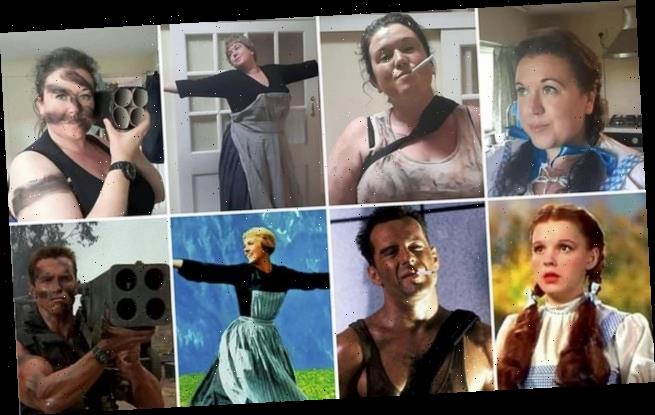 A Star is Born! Woman recreates famous movie looks in lockdown using household items – from Julie Andrews in The Sound of Music to Arnold Schwarzenegger in Commando

A woman has recreated scenes from classic movies with herself alongside the real leading roles to amuse her pals during lockdown.

Rozi Hogger, 41, who has been on furlough since mid-March, takes a picture of herself every Monday in a fully homemade costume – fit for the big screen.

She has remade the iconic look of shock from Kevin Malone in Home Alone, as well as Dorothy in the Wizard of Oz and Edward Scissorhands, using everyday kitchen utensils.

Rozi has made over 60 images, channelling Mary Poppins, Dolly Parton and Arnie, in Commando, with a rocket launcher made from toilet roll tubes. 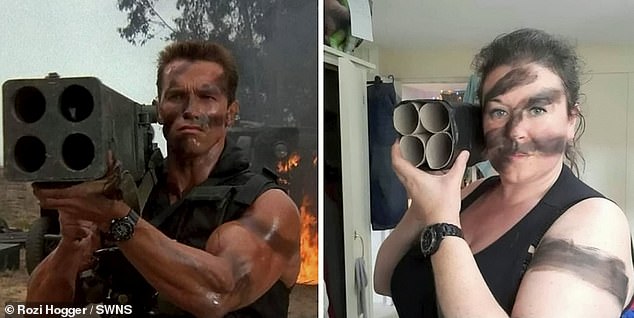 Rozi Hogger, 41, who has been on furlough since mid-March, takes a picture of herself every Monday in a fully homemade costume – fit for the big screen. Pictured recreating Arnold Schwarzenegger in Commando

We’re not in Kansas anymore! Rozi puts her makeup skills to good use, recreating iconic characters such as Judy Garland’s Dorothy in The Wizrd of Oz (left)

Theatre wardrobe worker Rozi also put her make up skills to use to recreate Morticia Addams and the Joker.

Rozi said: ‘I’ve been madly in love with costumes and dressing up ever since I was a kid and I’ve always been a big film fan.

‘It was just something for a bit of fun for me and to make my friends laugh who were still trekking into work on a Monday morning.

‘It’s all been really nice positive comments and people saying they have made them smile, and that’s why I was doing it really, to make people smile and to make me smile too!

The hills are alive! Each Monday, the movie buff recreates some of her favourite movie characters. Here she is, right, recreating Julie Andrew’s costume in the Sound of Music (right) 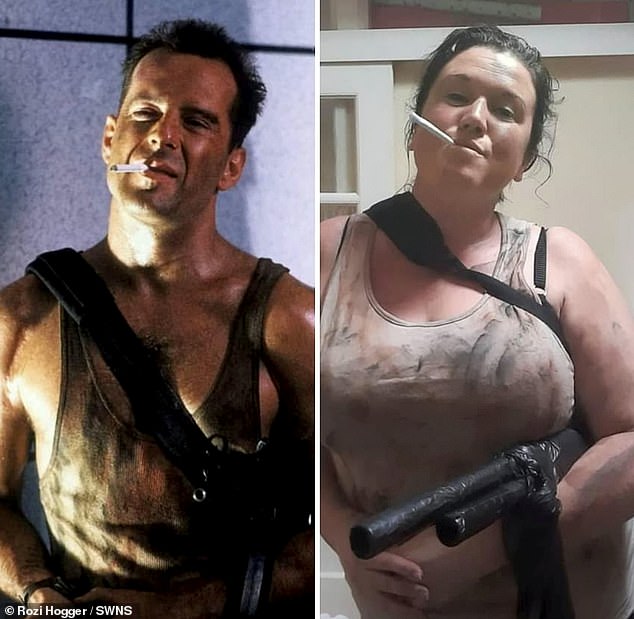 ‘To be honest, I would be doing them anyway because it keeps me entertained!

‘I work in a theatre department so I’ve got costumes everywhere and did it to cheer people up – but since I’ve been on furlough they have got more intricate.’

She worked in the wardrobe department at the Royal & Derngate theatre, but the majority of the stills were staged and taken by herself in her flat.

Lucky Star! Rozi, right, covers adventures flicks and historical dramas, like A League of Their Own, where she recreated the look sported by Madonna (left)

She’s a pirate! Having been furloughed since March, Rosi turned to the costume to cheer herself up. Here she is, right, recreating Johnny Depp’s look in Pirates of the Caribbeans

The film fanatic says she has an ‘endless supply’ of films to draw inspiration from, and that she’s already got the next few sorted.

Her sister Ellie Hawkes, 38, uploaded some of the photos side-by-side with an image from the original blockbuster in a Twitter thread in January.

She assured her sister that she didn’t have many followers so not many people would see them – but the thread quickly amassed nearly 6,000 likes.

Why so serious? A red suit, green shirt and some makeup was all it took for Rozi to rereate Joachim Phoenix’s look in Joker (left)

Here’s looking at you, kid! Rozi, right, as Ingrid Bergman in the 1942 movie, left starring Bergman and Humphrey Bogart 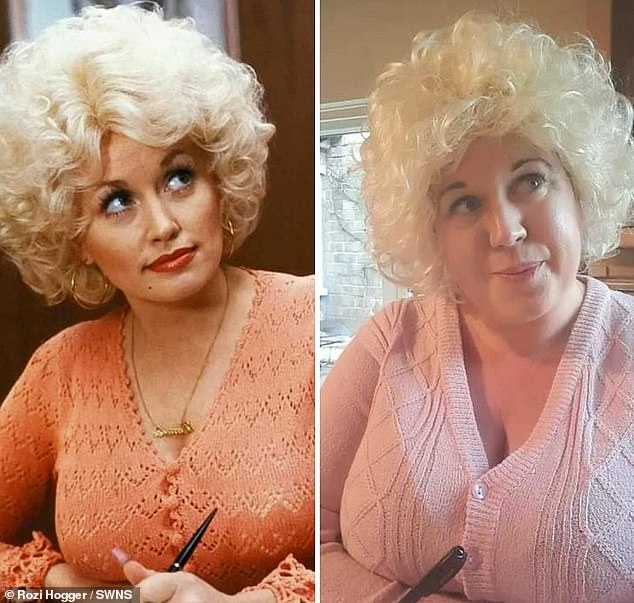 Singer Dolly Parton in 9 to 5, left and Rozi’s homemade version of the look, right. The movie aficionado’s looks went viral on Twitter earlier this month

Judy Dench as Queen Victoria in the 1997 movie Mrs Brown. Right: Rozi’s version of the look with accessories she’s found around her home

Left: Jim Caviezel as Edmond in the Count of Monte Cristo movie adaptation of 2002. Right: Rozi’s version with a white and black filter