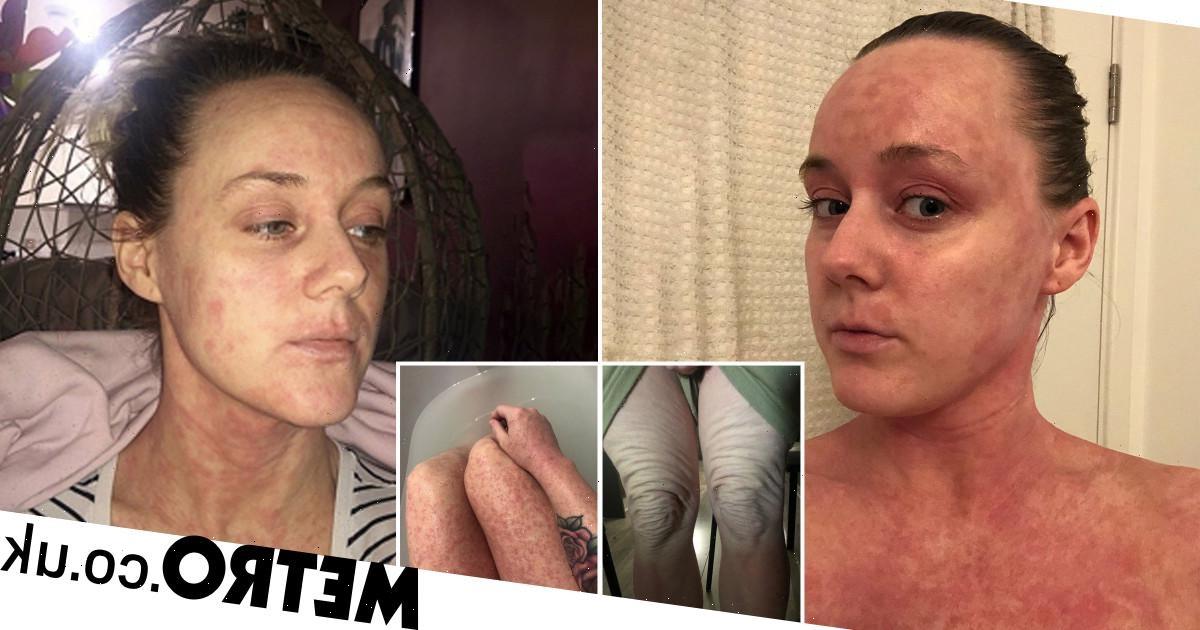 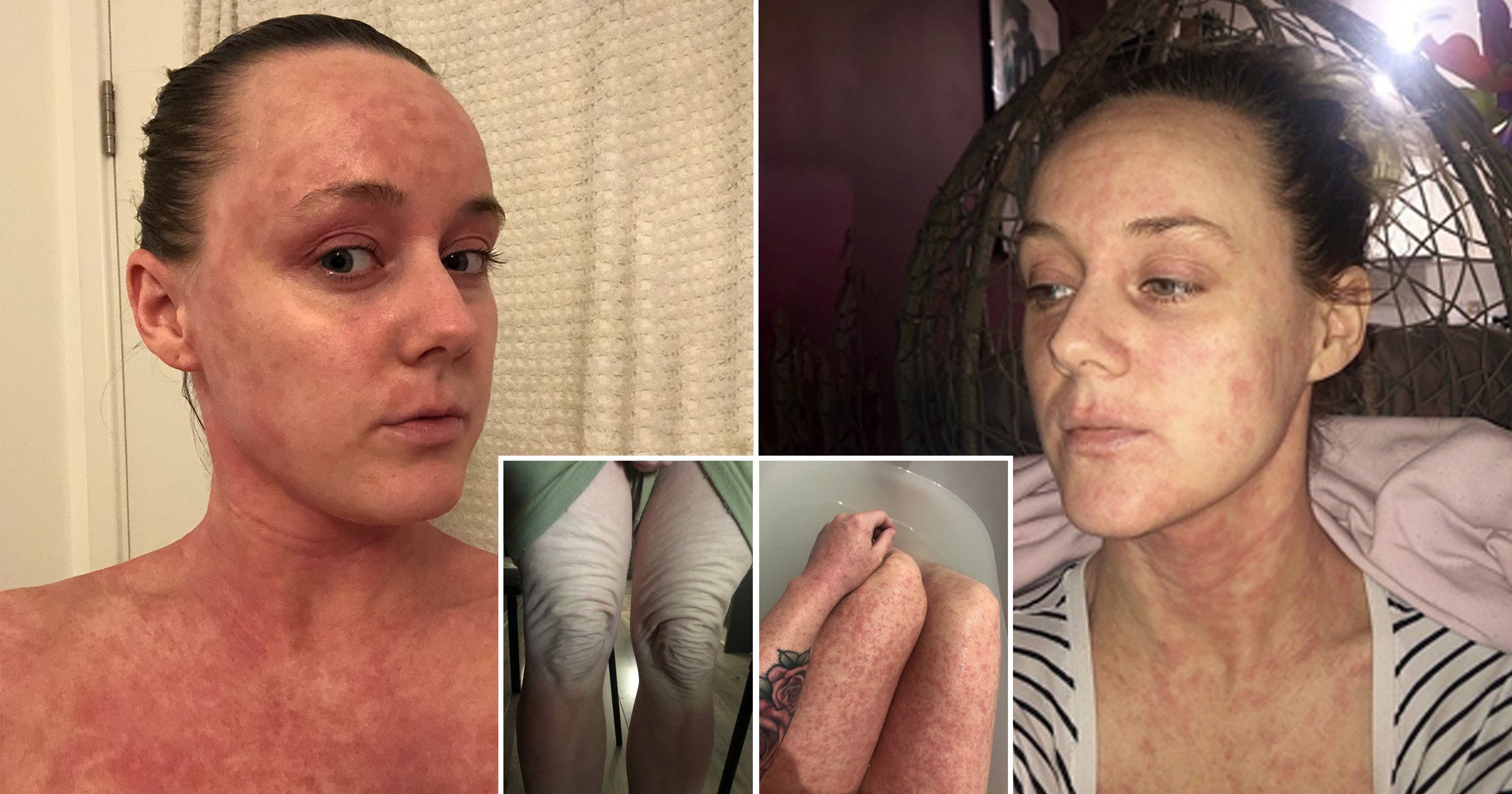 Beth Norman, from Wallington, South London, has shared the devastating effects of steroid cream treatments on her body.

The young woman was first prescribed topical steroids for eczema at just four years old. However, extensive use over the years left her with skin that smelt like ‘wet dog.’

As a child, Beth suffered with rashes on her elbow and knee creases, and patches on her face and torso. In hindsight, the 31-year-old feels her symptoms were ‘common’ and didn’t require steroid treatment.

Nevertheless, her experience as a youngster became a decades-long battle with her skin. And whenever she tried to stop using the topical steroids, her condition became worse.

The withdrawal symptoms made her skin red and painfully itchy – with a bad smell.

Beth – who now lives with her partner Blake and is pregnant with her first child – says she felt ‘disgusting.’ 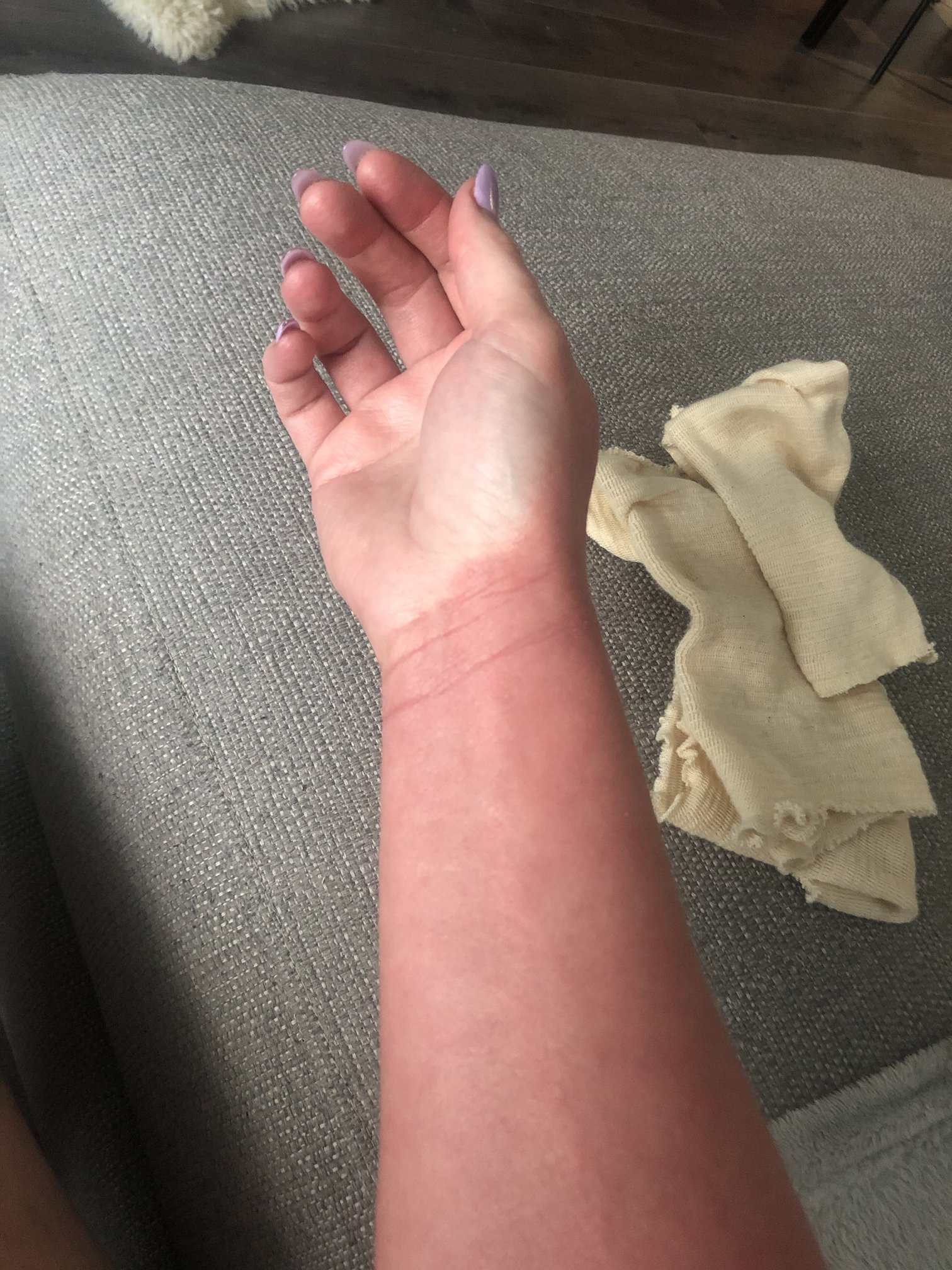 ‘I couldn’t stand the smell, waking up in the morning with your partner, knowing the whole room smells of rotting skin can really affect your self-esteem,’ she recalls.

‘Blake was always incredibly polite and dampened down its severity, but I could smell it and couldn’t get away from it. I felt incredibly angry and disheartened that throughout my whole life of managing my skin, I never even knew that the medication I was repeatedly prescribed could cause worsening conditions.’

Beth says neither she nor her parents were advised on how long the steroid treatment should last.

The e-commerce coordinator continued to use it as an adult – but on a trip to Ireland in August 2019, she noticed the medication wasn’t working as well as before.

Beth soon realised she had forgotten her shower emollient cream – which does not contain steroids – to reduce the dryness, and her skin quickly started to ‘spiral.’

‘My skin was incredibly sensitive and my clothes felt sore, radiating heat like sunburn when I was just sitting or lying comfortably,’ she adds.

‘I thought it was due to not having the usual products I relied on at the time but over the next few months I was noticing sporadic flares with more severe symptoms that I’d never experienced before.’

At the time, Beth felt stressed and presumed the issues were connected. After being advised by her GP she attended therapy but it didn’t alleviate her symptoms.

She says: ‘Unfortunately the further into 2020, the worse my flares became.

‘A handful of GPs I spoke to at my surgery were advising different kinds of emollients, antihistamines and increased potency of steroid creams.

‘From March to July, I tried all of their suggestions as well as altered my diet, reducing and cutting out processed food. I asked for a dermatology referral but, due to Covid, the waitlist was very discouraging.

‘The realisation that I may not have anybody to lean on for help was nothing short of terrifying.’

In early July 2020, Beth decided to stop using the steroids on the belief that they were making it worse.

Within days, she was covered in red rashes on her ‘paper-thin’ skin and had a deep bone itch.

She told her GP but didn’t ‘feel acknowledged’ – so she took to the internet to investigate for herself.

‘I was terrified,’ she says.

‘As far as I knew, I would be able to manage my skin with steroid creams for the rest of my life as I had done until then. I had no idea of the potential dangers other than being told they can thin your skin – but even when told this by GPs, it didn’t clarify what that meant exactly and there was no mention of what symptoms to look out for.’

The rashes began spreading across her body and were ‘oozing’ – and then the skin developed a strange feel and smell. Beth described it as ‘rubbery playdough’ that had a ‘wet dog’ aroma.

She soon went to A&E but claimed medical professionals couldn’t provide a definitive answer or help. The further she got into withdrawal, the scarier it became and the more symptoms progressed.

Despite seeing a dermatologist in October last year, Beth still doesn’t have answers and is unsure if or when her condition will improve.

However, she has found support from the online TSW community and her partner Blake.

Beth says: ‘I feel so lucky to have him by my side throughout my journey.

‘If he has ever been bothered by my appearance, I’d never know about it – he continues to call me beautiful and remind me how lucky he is and how strong I am daily and I couldn’t feel more supported.’

Beth’s now pregnant and, although worried about her skin’s reaction to hormone changes, she continues to avoid steroid creams.

‘I have currently endured 11 months steroid-free without medical acknowledgment for my skin, while also growing a baby for six months,’ she adds.

‘I never thought that the first time I would be pregnant I would be the most ill I have ever been in my life.’

Now, Beth and Blake are focused on meeting their baby but remain hopeful that the TWS will ease.

She adds: ‘I will never fully comprehend my ability, strength and resilience to have got this far, especially during pregnancy. I still endure symptoms daily but they are more manageable and I am starting to feel myself again.

‘TSW has definitely been the most conflicting blessing in disguise which has given me a new outlook on life enabling me to look out for myself and wellbeing and always look for gratitude no matter how dark times get.’

Topical steroid withdrawal (TSW) remains unrecognised by the NHS. You can now sign a petition fighting to fund research into the condition here.

Send us an email at [email protected]