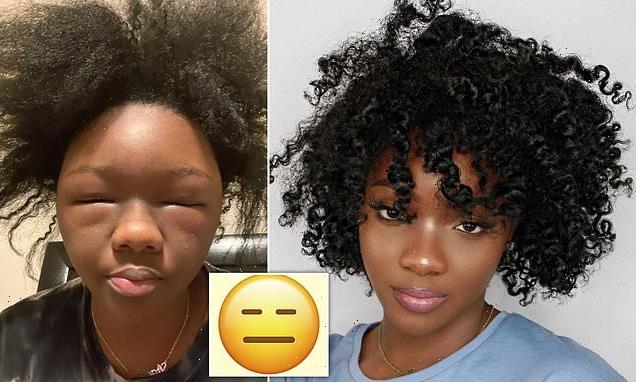 Woman, 29, says she was left looking like an unimpressed EMOJI after a severe allergic reaction to hair dye left her with a burning scalp and swollen face that took days to return to normal

A woman claims a horror reaction to hair dye left her looking like an ’emoji’ as her entire head ballooned, leaving her unable to see for days.

Shanika McNeil, a tech coordinator from Houston, Texas, dyed her hair black in January with her usual product before waking the following morning with a headache and noticed her forehead was beginning to swell.

Over the next few hours it became clear that she was suffering an allergic reaction as her scalp began to ‘burn’, a rash broke out on her forehead and she continued to swell by the hour. 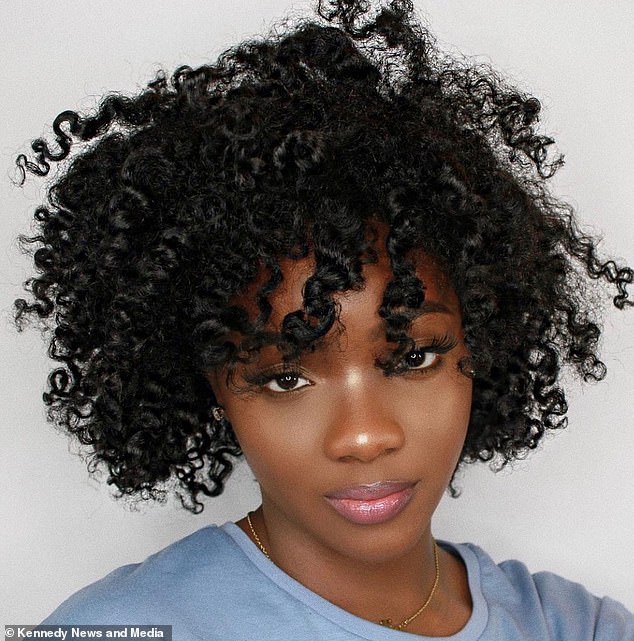 Shanika McNeil, a tech coordinator from Houston, Texas, 29, said her head swelled to comical levels after she suffered a bad allergic reaction to a hair dye in January, which took two weeks to heal (pictured before the reaction) 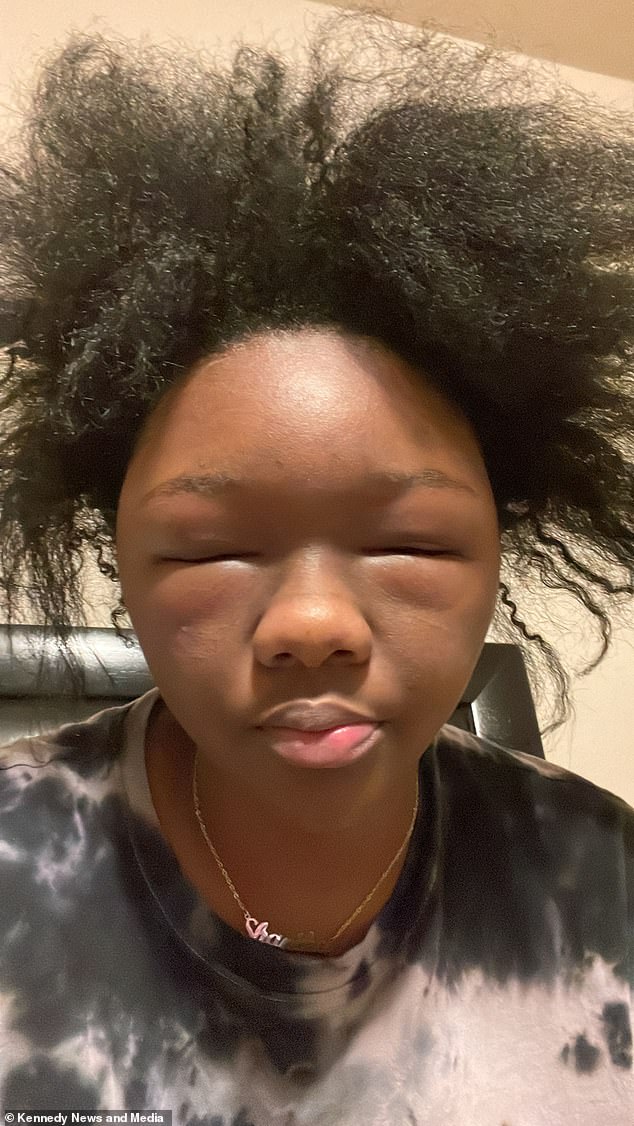 The tech coordinator said she woke up the day after her dye and noticed her face had started to swell, showing no sign of stopping, pictured 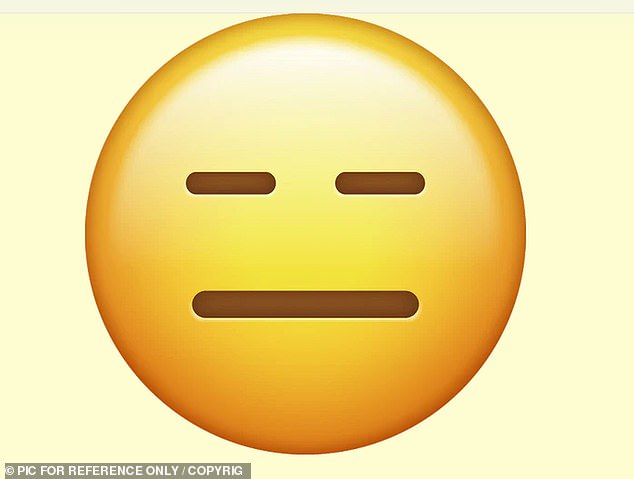 The 29-year-old joked that her round, swollen head made her look like an ’emoji,’ but  says the situation became less funny when doctors warned that the swelling could travel to her throat and suffocate her

The 29-year-old joked that her round, swollen head made her look like an ’emoji’ but says the situation became less funny when doctors warned that the swelling could travel to her throat and suffocate her.

It took two rounds of antihistamines and almost two weeks for the swelling to fully subside, three days of which Shanika spent blinded by her puffy eyes as if she had ‘lost a fight’.

Shanika who has been left with ‘bald patches’ from the severe reaction, is now urging people to patch test every time they use a dye even if they have used it before with no issues.

She believes that the burn was caused by paraphenylenediamine (PPD) – a chemical commonly found in black henna and dark hair dyes.

Shanika said: ‘I dyed my hair myself on Sunday evening and it was fine, I had no issues.

‘Then in the morning I woke up and I had a headache – it lasted all day and then probably around 3pm I noticed I had this line around my forehead and a rash.

‘Then immediately all the symptoms started at once – my scalp started burning like it was on fire and then I used a napkin and could tell my scalp was oozing. 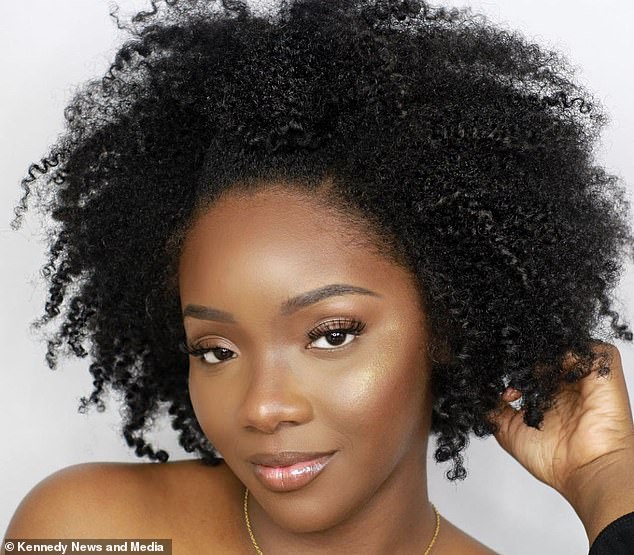 Shanika, pictured before, believes that the burn was caused by paraphenylenediamine (PPD) – a chemical commonly found in black henna and dark hair dyes. 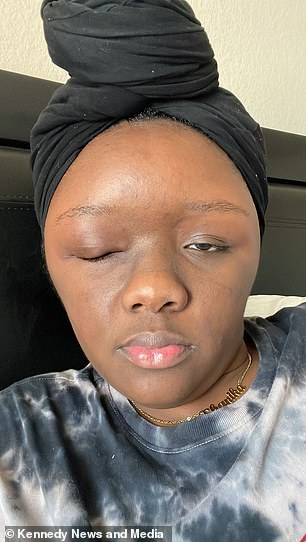 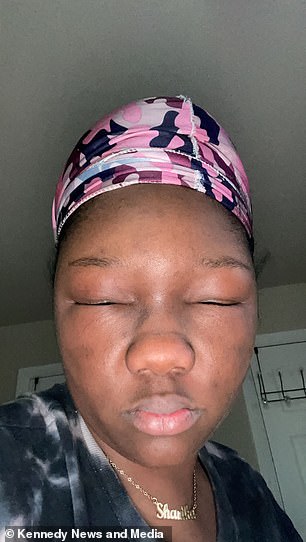 The 29-year-old documented how her head swelled after the dye. Her forehead became so swollen, she couldn’t see anything for days

‘I went home and made a doctor’s appointment for the next day. As the hours went by I noticed my forehead was getting puffier.

‘The next morning I went to the doctor and took the dye with me because I knew it was that and he told me that it was an allergic reaction to an ingredient in the dye called PPD.

‘He gave me antihistamines and steroids to help with the swelling. I left and went home and at this point I wasn’t in any pain because of the medication.

‘Every hour I looked at myself and my forehead was getting bigger and the swelling was worse. I was laughing at myself because I did look extremely funny. 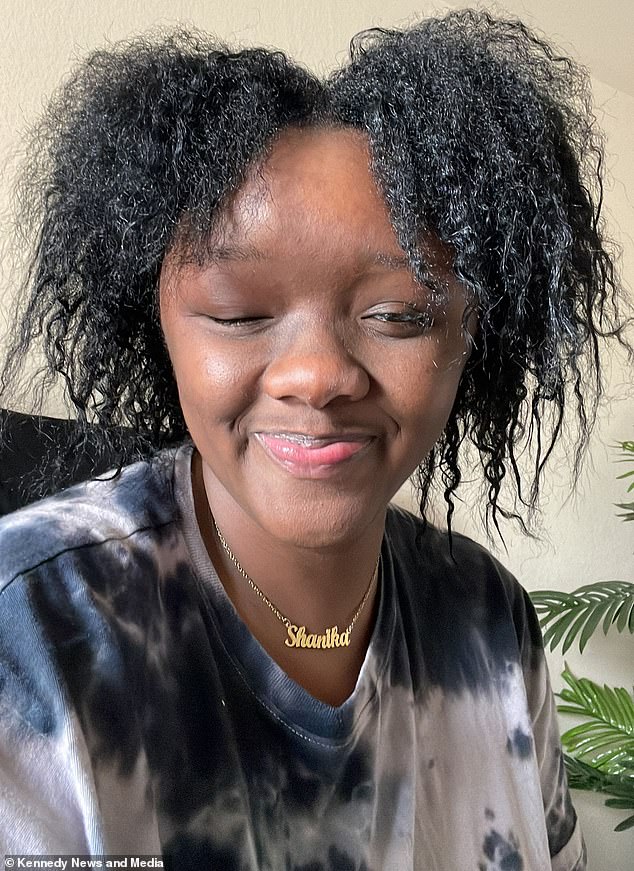 While her whole family was ‘panicking,’ Shanika was not alarmed by the reaction, until it started to get more painful

‘I just thought it was funny but after a few days when the pain kicked in it wasn’t funny anymore.

‘My eyes were completely swollen shut so I couldn’t see for a few days.’

When her swelling continued to get worse despite taking antihistamines and steroids, Shanika claims her doctor warned that it could travel to her throat and urged her to go to hospital.

At her local emergency room she was prescribed more antihistamines and steroids and kept in for observation for almost four hours before being allowed to go home. 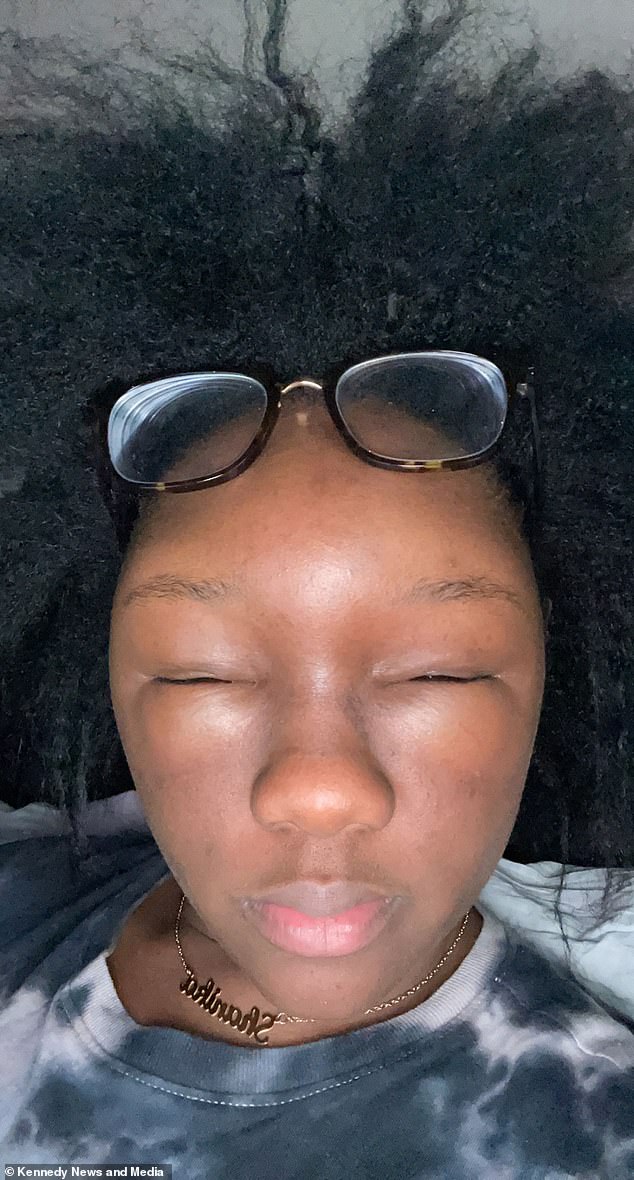 ‘I just thought it was funny but after a few days when the pain kicked in it wasn’t funny anymore,’ Shanika admitted 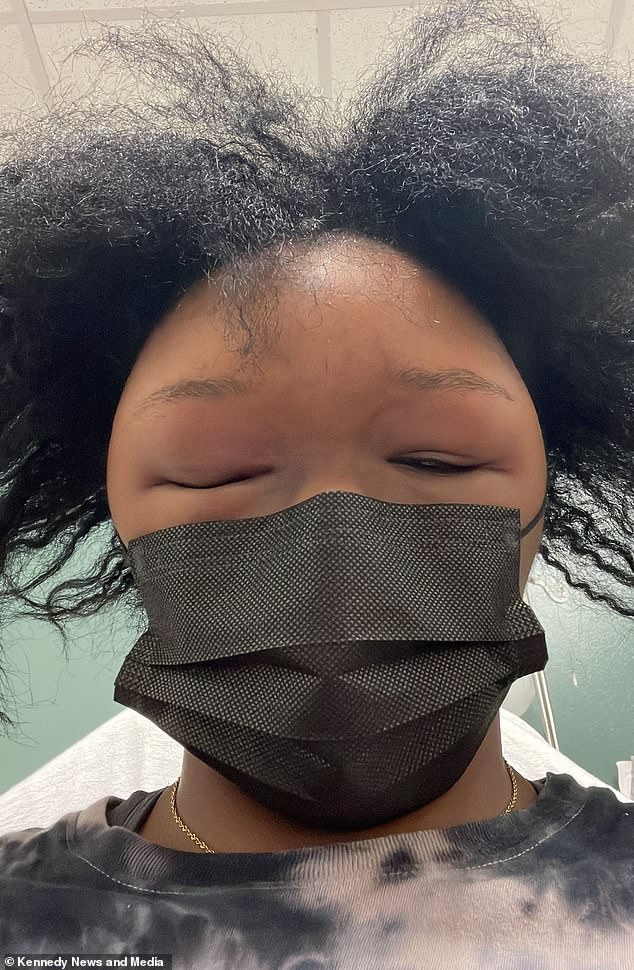 Eventually, Shanika went to the hospital, where she received two rounds of antihistamines. It took two weeks for the reaction to heal

But over the next few days the swelling became so severe that she was left blinded by her puffy eyes for three days and forced to take time off work while she waited for the swelling to subside.

Almost two weeks after dyeing her hair the swelling finally went down and the ‘oozing’ sores on her scalp began to heal.

Shanika said: ‘The swelling moved from my forehead to the middle of my face so my eyes were completely swollen and burning.

‘I tried to ice them and they would go down a little bit but then they would get bigger every time. I had bruises under my eyes because the swelling was so bad.

‘My family were extremely worried because my head was so swollen so I called my doctor. 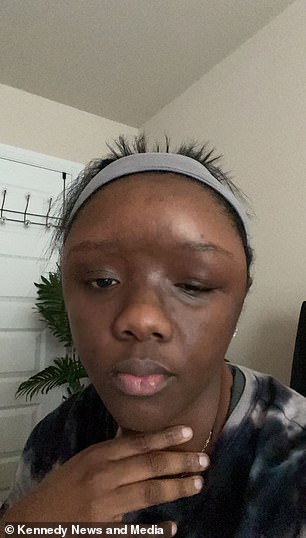 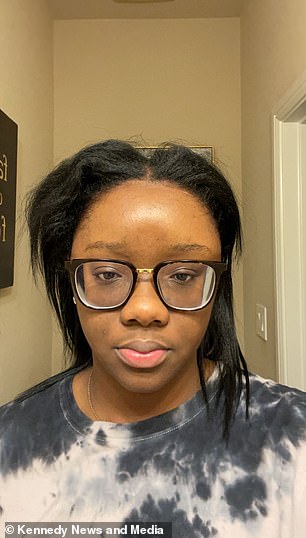 The swelling decreased and Shanika’s face began to return to normal, however, she said she still looked like she had ‘lost a fight’

‘He told me if the swelling was getting worse then I needed to go to the emergency room as soon as possible because the swelling could move down to my throat and I could die.

‘So I went to the emergency room and they were all pretty shocked at how I looked and they gave me more steroids and antihistamines.

‘I was probably there about three or four hours before the swelling stopped and then they let me go.

‘It was so swollen that it just took some time to go down. I had to use baby shampoo for weeks because that’s all I could take.’

Shanika claims the severe allergic reaction has left her with bald spots, eczema and a scalp so sensitive that it hurts to brush her hair, despite never having any of these problems previously. 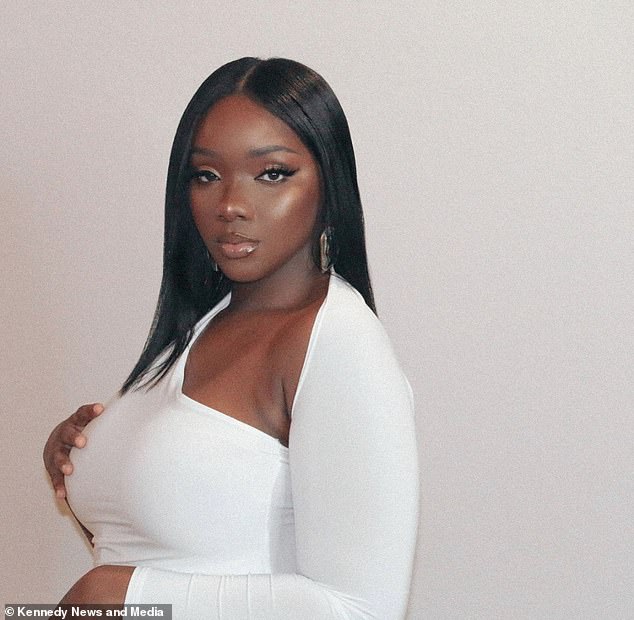 Shanika before. The tech coordinator is now pleading with people to always do a patch test before using hair dye, as it could have avoided her the painful experience

She now believes that she missed earlier signs that she was allergic to the dye as she had been suffering from scalp sensitivity over the previous year.

But she claims she did not link the sensitivity to the dye as it did not happen until a week or more after she used the product each time.

Shanika now hopes to warn others to patch test every time they use dye to ensure they have not developed an allergy and to also look out for any signs of sensitivity to avoid suffering an extreme reaction like she did.

Shanika said: ‘I haven’t dyed my hair since and I don’t have any intentions of doing it – I’m so scared to put any type of chemical on my scalp.

‘A lot of people in the comments said the same thing happened to them – they’d been using a dye for years and then had a reaction.

‘I’ve told people to do a patch test every time they use it [dye] and if you are sensitive to it, look for a dye that doesn’t have PPD in it.’