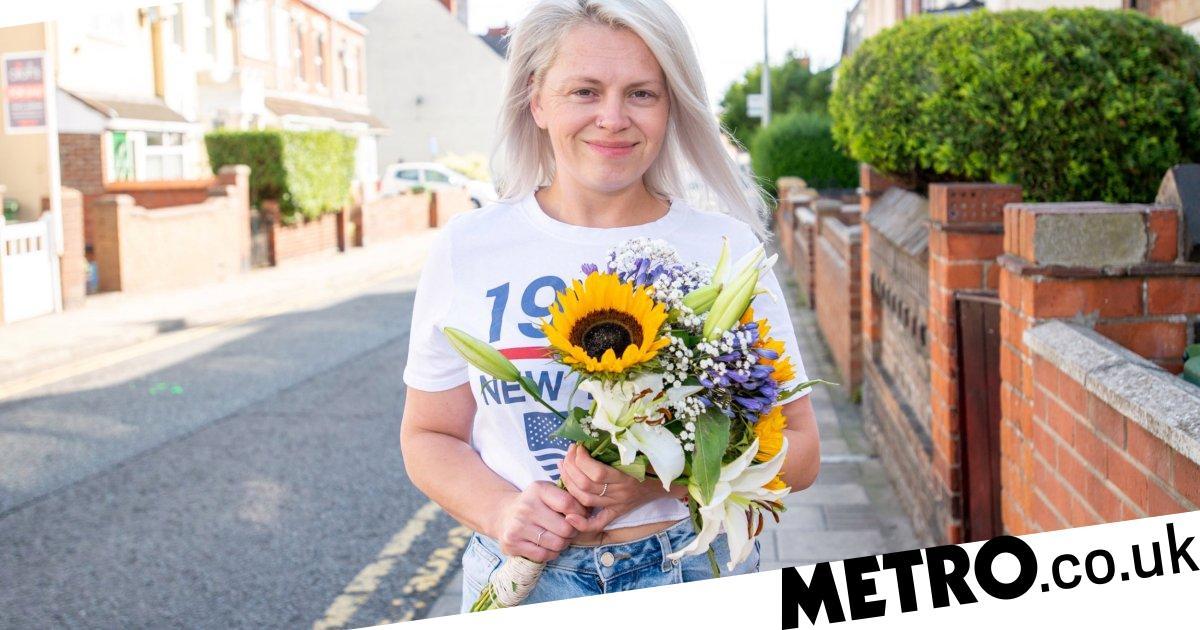 A grieving daughter is honouring her late mother by carrying on her tradition of giving flowers to strangers in the street every week.

Polly Collins, 39, handed out bunches of flowers to people she passed, just the same way her mum Lynn had done for six years before her death last week.

Polly intends to keep the tradition going – and said people burst into tears when she tells them why she is giving out the impromptu gifts.

The tradition started when Polly’s grandma, Betty, was in a care home and Lynn would take her a fresh bunch each week.

After Betty’s death aged 84 in 2013, Lynn, 69, continued to take flowers to the care home for staff to distribute to patients.

She then decided to spread the joy beyond the care home by handing bouquets to strangers in her hometown of Louth.

Lynn would stop people and give them flowers in the street and explain why.

Polly, a hairdresser, said: ‘When you lose someone you want to keep a bit of them alive.

‘This is my way of keeping my mum’s memory alive.

‘I used to get really embarrassed when she used to do it.

‘But when I got past that embarrassment I thought that could make someone’s day.

‘It usually ends in tears. Happy tears – well I hope they are happy tears. People hug me and burst into tears.

‘I had one lady try to give me them back the other day. She said I should have them for my mum, but I’ve got enough.

‘I say to them “Can I give you these flowers in honour of my mum?” and I explain to them the story.

‘One lady I gave a bunch of flowers to said her mum was really poorly at the minute and she was so grateful they had cheered her up so much.’

Polly’s mum wrote a Facebook status in 2015 explaining why she gives away the flowers.

Polly added: ‘It had been shared a few thousand times and she was so happy she had gone viral.

‘A few years ago she gave them to this lady but didn’t explain the story.

‘The lady wrote a letter to the local newspaper and asked if anyone knew what it was about.

‘Mostly she did explain “this is Betty’s bunch, I can’t buy my mum flowers so now I need to buy someone else flowers”.’

Lynn, who married husband Ken Hives on her sick bed in hospital in June, passed away from cancer on 7 August.

Determined to keep her mum’s memory alive, Polly posted on Facebook asking her friends to donate a bunch of flowers to strangers in her mum’s honour – and her salon in Cleethorpes has been inundated with flowers for her to distribute.

She added: ‘A lot of people had messaged me after they had heard about my mum.

‘My close friends were asking if they could do anything to help.

‘Before my mum passed away, a lot of people knew my mum was poorly.

‘Seven weeks before she passed away we were told this is the end of the road for her and she needed end of life care.

‘I had a lot of messages offering for people to do something for me.

‘I kept saying I was ok and politely declining, but after she died I thought “I do want people to do something for me”.

‘I put my status up asking people to get involved.’

Polly’s status was shared widely and sparked a worldwide trend where people would buy a bunch of flowers to give to strangers to spread the kindness.

‘I have had random people message me saying it’s a lovely thing to do. I’ve had so many messages I can’t reply to everybody.

‘My mum would be well chuffed by all this – she always wanted to go viral.