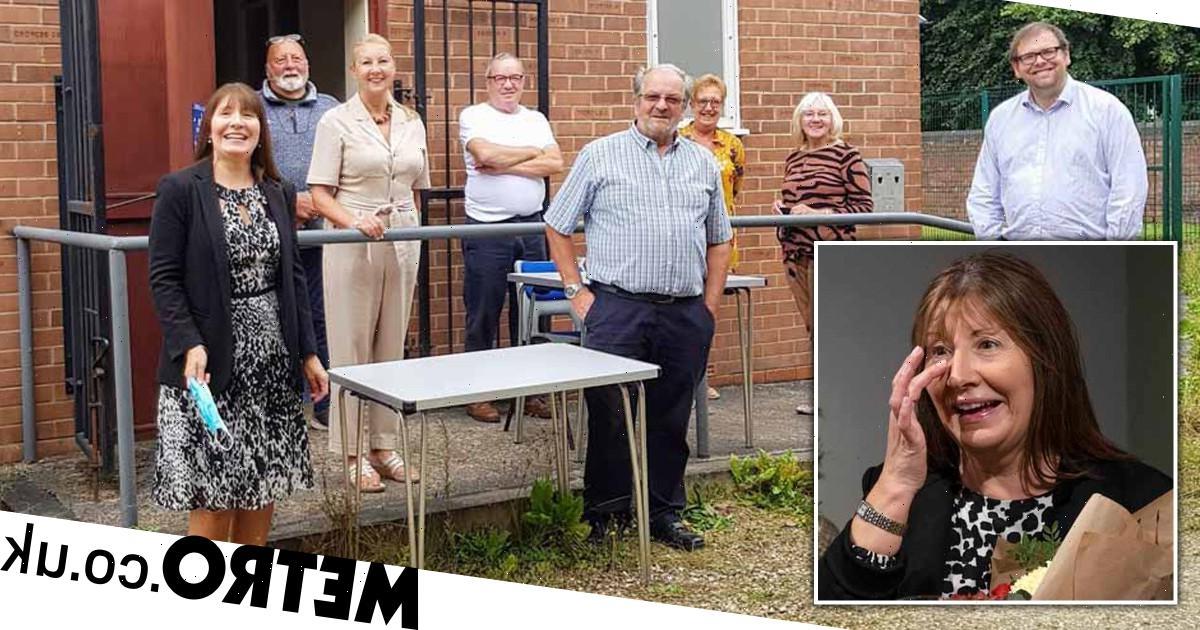 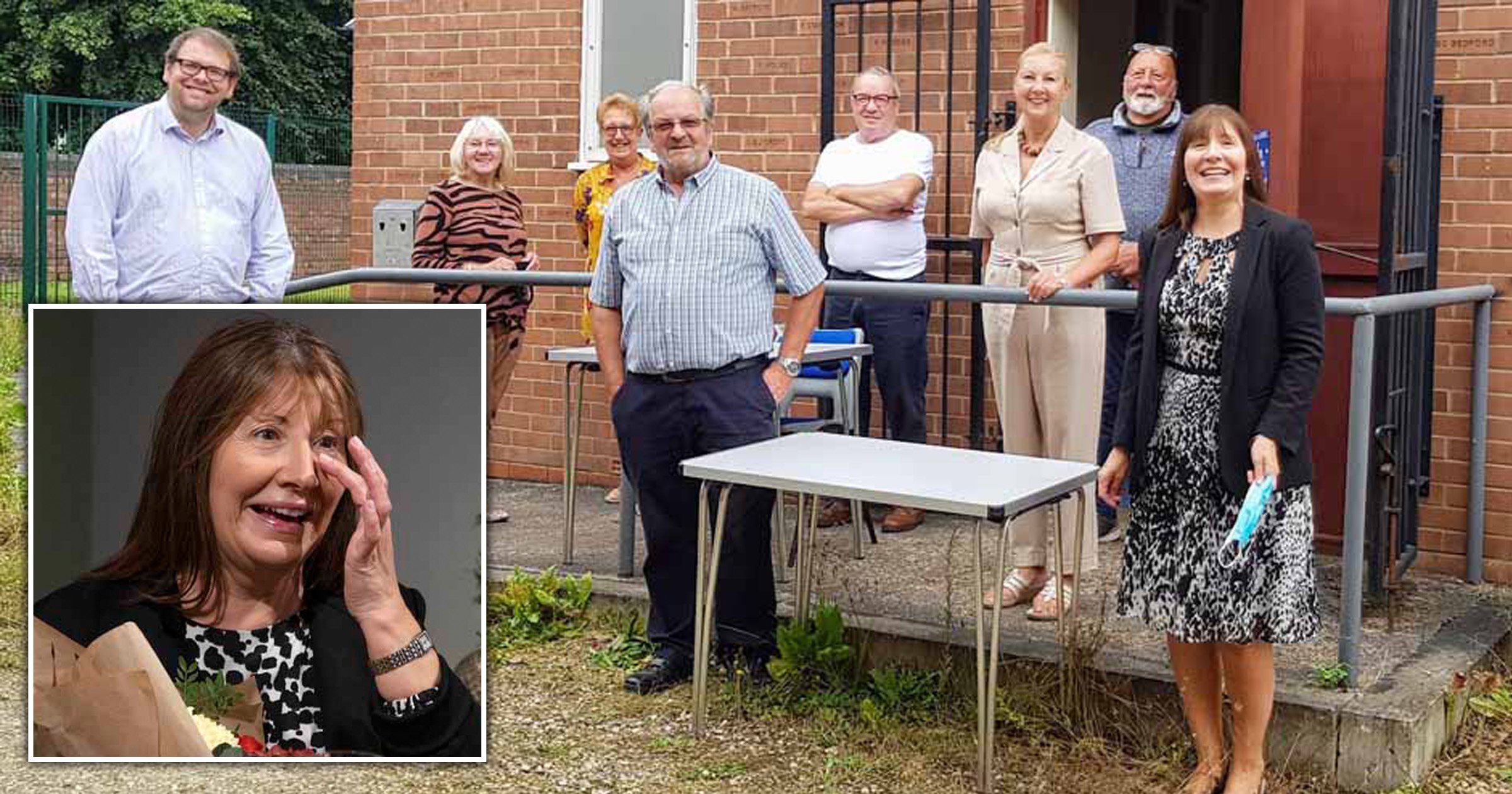 A project manager has been hailed a ‘community hero’ as the power behind a champion effort to feed thousands during the pandemic.

Mandy Chambers embarked on a grand project to give vulnerable people access to free meals when the Covid lockdowns meant their usual outlets closed.

The 57-year-old organised batch cooking on a grand scale and was able to make sure more than 160,000 people had enough food during this difficult period.

Now Mandy, who lives in Chesterfield, Derbyshire, with her husband Neil, says she is overwhelmed by the response, after her efforts during the last 18 months were recognised by the Feeding Britain charity.

‘I was shocked and delighted when they nominated me as a community hero,’ she says. ‘The whole team deserves the nomination just as much as I do.’

Being responsible for the strategic direction and management of individual projects for Rural Action Derbyshire, a non-profit organisation, is no mean feat.

Mandy works closely with key members – from upstream public health directors to individual grass roots volunteers – to make sure the tasty meals go exactly where they are needed and at the right time.

Leading the ‘batch cook’ programme, it has seen more than 160,000 cooked meals being distributed to people in need during the pandemic, made from a combination of surplus food and provisions donated by local wholesalers.

‘I have a background in public health and I had been due to start the role at Rural Action Derbyshire after my planned holiday in March 2020, which was cancelled when Covid hit,’ says Mandy. ‘Instead, I started the job early, on the first day of lockdown.

‘It was the most amazing experience, because I have a lovely team to work with. We’ve done some incredible things in the last 18 months, especially when we’ve all been working remotely.

‘I helped to set up a network of community projects to provide food for people who need it, whether that’s at social eating venues or food banks.’

Establishing 13 projects across Derbyshire since she started, recipients have included vulnerable people who were adversely affected by café and shop closures during lockdown.

Mandy adds: ‘A lot of people who were perhaps elderly or homeless or living in temporary accommodation relied on places like community cafés. When lockdown hit, a lot of these facilities closed.

‘We wanted to bridge that gap and help people who were struggling to afford to eat.’

Mandy is incredibly proud to have established the projects and delighted that they are all still up and running.

‘We’ve worked hard to get a strong network of suppliers who can provide us with surplus food that would otherwise go to waste,’ she adds.

‘We’ve built these projects from the ground up using the skill of the people in the communities and this sustainability is very important for us to be able to remain open.’

But, just because surplus food is used to prepare the meals, that doesn’t stop them from being delicious.

‘I don’t believe in feeding people whatever scraps we can get our hands on,’ she says. ‘It’s not a case of surplus food for surplus people.

‘We lovingly make hearty and nutritious meals that people can really enjoy. That is very important to me.

‘Working long hours comes with the territory with my role, but seeing the tally of meals growing and knowing that each and every one of them would make a difference to someone was always a huge motivation.

‘It’s so rewarding, knowing our meals are going to a family with children, or an older person unable to get out or cook for themselves.

‘The inventiveness of the chefs working in the projects, using up surplus food, has also been a standout feature. Every meal has been of a very good standard.’

Mandy was invited to an event at the Prezzo restaurant in Islington, north London, to celebrate local heroes, and she was shocked to discover she had been nominated as a community hero.

‘I had brought my mum, Pearl, with me who was in on the surprise, but it was a total shock to me,’ she says.

‘I had no idea that I was nominated until I arrived. It was so unexpected but really lovely.

“’The work is hard and, at the moment, social injustice is so widespread that it can seem as if nothing we do will ever be enough.

‘But, if raising extra funding for programmes like this can give a young person a ray of hope, or some respite from a chaotic life, then I suppose it goes some way to changing things – and it’s certainly better than doing nothing.’

Still, Mandy is keen to point out that, as project manager, she is only ever as good as her team.

She says: ‘It really isn’t about me at all. I just wanted to help and so did everyone I was working with. There are so many people I could talk about and the contributions they made.

‘To get that recognition for our team was just lovely.’

National director of Feeding Britain, Andrew Forsey, is in no doubt that Mandy deserves every ounce of recognition she has received for her amazing work.

He comments: ‘Mandy has done outstanding work over the last 18 months.

‘There were so many people who could be nominated, but Mandy’s contributions since the start of the pandemic have been crucial, and this nomination reflects that.’

Prezzo is encouraging everyone to nominate their local heroes as part of its ‘Love Every Moment’ Christmas campaign.