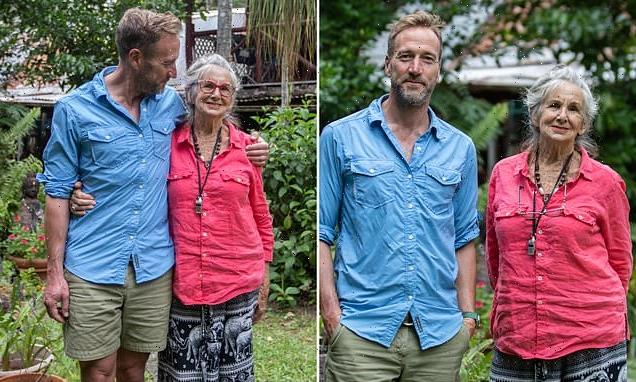 Woman, 79, tells Ben Fogle she loves living alone in the Australian jungle – despite being ‘violated’ by a man and neighbours threatening to burn down her cabin because she’s a feminist

A 79-year-old living in the Australian wilderness told Ben Fogle that she loves it, in spite of threats from her neighbours, and dealing with regular floods and snakes.

Speaking to the presenter for New Lives in the Wild, airing tonight at 9pm on Channel 5, Bette, originally from Byron Bay, revealed she moved to a remote cabin in the wetlands of North Queensland in 1988, with her seven-year-old daughter Nadia.

In spite of struggling with restricted mobility, the floods that often take over her home, and the unwelcoming neighbours who threatened to burn down her cabin, she joked that ‘you go through hell and high water for the things you love.’

She added the wetlands are a ‘spiritual place’ for her, comparing it to church, in spite of admitting to Ben that it was the only place where she was ‘violated in her home’ by a man, adding the same person tried to run her over with a car and that she had to flee into the woods. 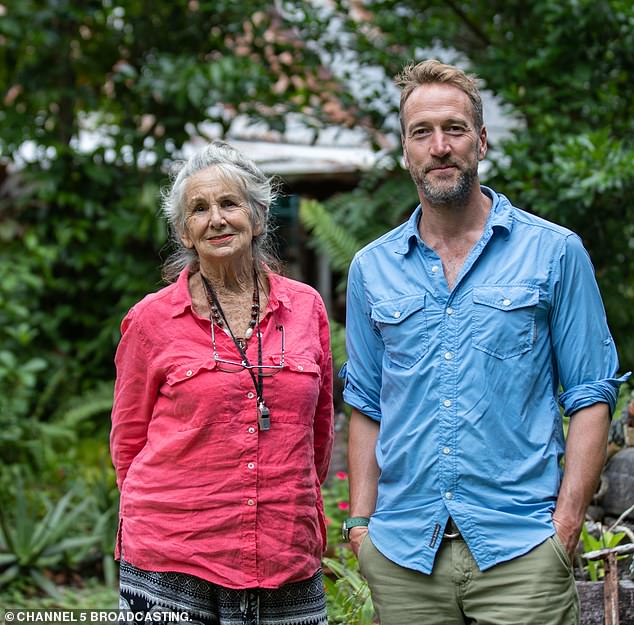 Speaking to the presenter for New Lives in the Wild, airing tonight at 9pm on Channel 5, Bette, left, originally from Byron Bay, told Ben Fogle she moved to a remote cabin in the wetlands of North Queensland in 1988, with her seven-year-old daughter Nadia

Bette got married at 19 in Byron Bay, where she said she spent some of the happiest times in her life, living by the sea with her three children for 15 years.

‘Byron Bay; most of my happy memoires are from there,’ she said.

‘Lots of dancing, lots of music around the house, I had a view of the sea from the front veranda, it was a great place then.

‘My kids said that when they were brought up there it was a free time. Free range kids, that’s how I raised them in Byron Bay,’ she added. 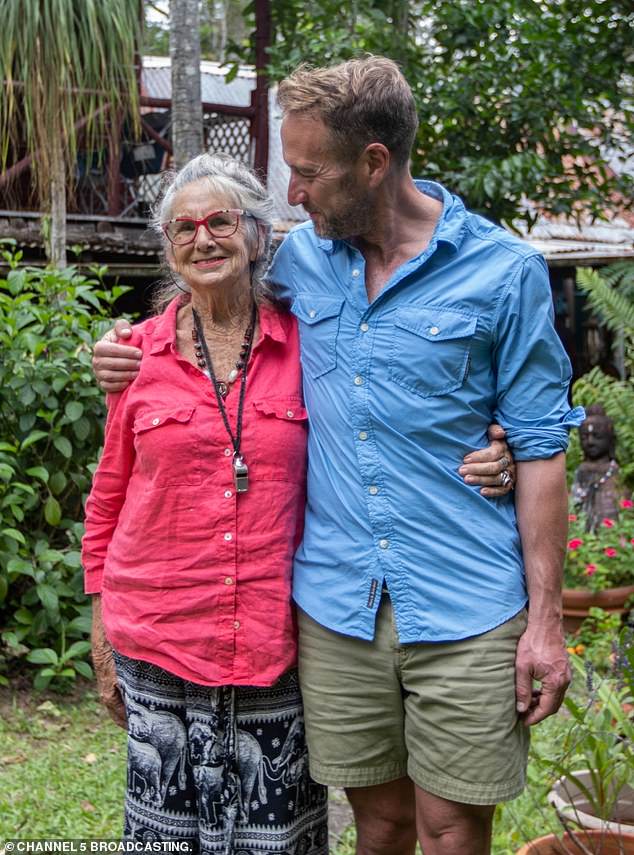 Bette revealed she was ‘violated in her own home’ in the cabin, yet, in spite of a frightening row with a former partner, she stayed

However, her marriage ended in 1973, and her grown-up children left home shortly after.

In 1980, she fell pregnant with her youngest daughter, Nadia, and in 1988 the pair took a trip to the North Queensland wetlands.

That’s when Bette found a remote cabin she immediately fell in love with, and decided to sell her Byron Bay house and quit her job as a social worker to move to the wilderness, with Nadia.

‘I just loved it, I had to be here, I had an incredible feeling I had come home, somehow,’ she recounted.

‘She was only seven,’ she said of her daughter. ‘She didn’t have any options, I was her mum. Poor kid. 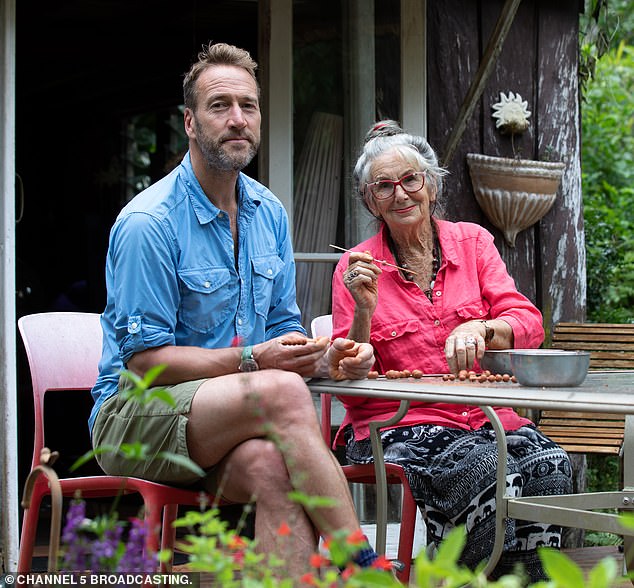 Bette said she felt at home when she first visit the abandoned cabin, and decided to move there on the spot. She lives off her pension and fills her time with arts and crafts

But Bette was sure about her choice, wanting more for herself than a quiet suburban life.

‘I don’t think I wanted to live the same life over again, you know, being a single mum. I needed another life,’ she said.

‘I needed something with a bit of adventure. All of this just happened,’ she added, admitting she didn’t sit down to think her decision over before making the move.

‘It hasn’t been an easy life, but I always say nothing with me if ever easy,’ she joked.

Nadia left home 26 years ago, leaving Bette on her own to look after the house and manage it. She now works for a surgeon but visits her mother whenever she can.

The mother-of-four lives off her pension and the house is connected to the grid, but the rough environment means there are snakes and insects regularly lurking around her home.

The closest town to her remote part of the wetlands is 30km away, and she needs to drive there to get her groceries and other essentials. 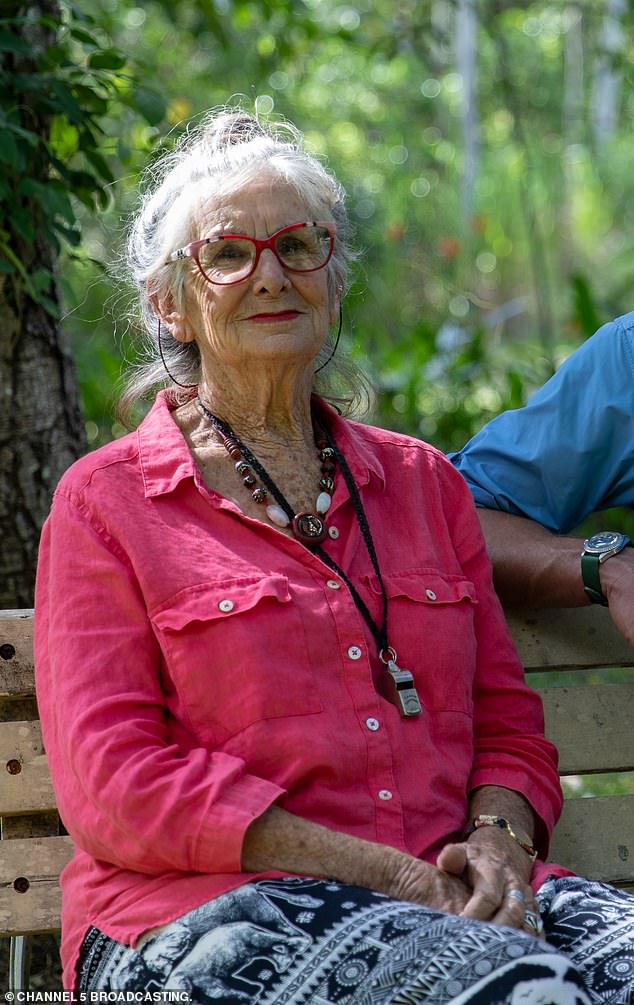 The mother-of-four said she doesn’t dwell on what life has in store for her, instead saying she is privileged to have lived this long

While her loved ones and family visit from time to time, her only regular company is her dog, Sid Vicious, who she jokes has a ‘personality problem.’

As Ben found out on the show, she’s had to cope with the regular floods that take over her home as well.

She has installed crooks to lift her sofa from the floor, so that she can sit on it when water floods her home.

She revealed that getting settled into the abandoned cabin in the late 1980s had been ‘overwhelming.’

‘I didn’t have a tap to turn on,’ she told Ben, revealing she used big fires she made outside to cook.

‘I have been very scared, I have felt very lonely, all of those things, but luckily, I’ve been able to overcome because I love the place so much,’ she added.

‘You’ll go through hell and high water for something you love. You know there are things you just need to get over and you just get on with them,’ she went on.

She admitted to Ben she rarely asked other people for help, because she was told she wouldn’t be able to make it on her own in the jungle because she was a woman’, explaining that her neighbours consider her ‘crazy,’ and don’t like the fact she is a strong feminist.

She confided in Ben that locals had threatened to throw can of petrol over her house because they weren’t happy with her living their or being a feminist.

‘They saw it as being a man hater. You got to stand up to what you believe in,’ she added.

Bette told Ben that while she doesn’t ‘hate’ men, but she dislikes ‘aggressive men.’

‘I had never been violated in my home until I came here and that was really really scary, because it had never happened to me in my life before,’ she said.

She added that she was in a relationship with the man who attacked her at the time.

‘I was so scared, really, and then he tried to run me down with the car and I was running, I was so frightened.’

Admitting that she’s the kind of person who tries to ‘patch people up’, she realised she has a pattern of ‘trying to fix broken people’, and finally took a vow of celibacy when she was in her 60s.

‘If you haven’t found what you’re looking for by the time you’re sixty… to be that person sitting at the end of the bar, waiting for Mr Right to come along,’ she said with a laugh.

She took Ben to a creek, away from the house, and talked of her love of nature, tearing up as she described this particular spot in the wetlands as ‘a spiritual place’.

‘I don’t get to share it with that many people. It’s just beautiful,’ she told Ben, wiping tears from her eyes.

‘This is my church, I’m sure this is how people must feel when they go into a church.

‘It’s given me peace of mind, I’d say. It makes me feel away from all the troubles of the world when I am here,’ she added.

Bette admits she misses her children, but added she is determined to see the brighter side of life.

‘Laughter is the best medicine and if you can put a smile on somebody’s face, isn’t that the best thing?’

While she admits that her body is ageing and her mobility is not what it used to be, Bette also said she doesn’t want to dwell on thoughts about the future.

‘Sometimes I get a bit freaked out, it’s not going to get very good for me,’ she said, adding there is ‘no use dwelling on that because otherwise you’d get depressed

‘I think I’m privileged to have lived this long,’ she said she would like her life to be summarised as: ‘Born, died, she tried.’

Ben Fogle: New Lives In The Wild airs tonight at 9pm on Channel 5.

World’s best restaurant Noma – where dishes have included live ants and veal ‘fibres’ and lunch can cost £653 – will close this year, as its innovative owner blames industry’s ‘gruelling’ workload

Pro snowboarder reveals how he quit his $150,000-a-year career that felt ‘like a circus’ to live in a tiny solar-powered hut in the snow