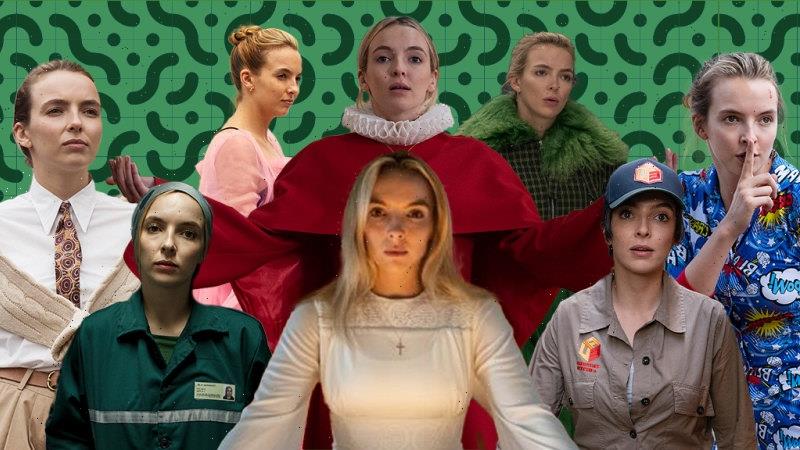 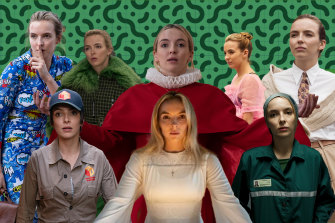 Jodie Comer as the many Villanelles in Killing Eve.Credit:Illustration: Kathleen Adele

It’s no secret that I love a good villain. Or villainess, to be more precise. Years ago, when fashion guru Maggie Tabberer came to my home, she was somewhat aghast at my collection of Niagara Detroit paintings of pin-up style women with weapons and evil slogans such as “violence is golden”. I found the works ironic and subversive, Maggie found them a touch disturbing. But this was hardly the first clue as to my darker leanings. As a child, my favourite Star Wars character was not the virginal Luke or Princess Leia, but Darth Vader, whose costume I wanted to inhabit, and I was by then already drawn to Disney’s darkest – Maleficent, Cruella, The Evil Queen, Ursula and her pet eels (so badass). A new generation of girls now have a more rounded view of Maleficent, and Cruella. Vindication, you see. They aren’t all bad. Just mostly. And I, for one, could watch them all day.

But just how bad, how disturbing, would a more realistic villainess be? One seen not as a caricature, a monster or a cyborg, but as a human woman? This is where Villanelle steps in. From the very first scene of season one of Killing Eve, the Emmy award-winning hit TV series starring Sandra Oh and Jodie Comer, we see a prototypical psychopath hiding in plain sight as Comer’s fresh-faced, well-dressed and eerily calm Villanelle sits in a cafe eating ice cream. She smiles at a child, prompting the child to smile back, building trust, the two seemingly enjoying a friendly exchange. Only this wasn’t friendly for Villanelle, this was study. She was perfecting another mask to wear, another expression to use to fit in, to fake common empathy and cover for her shallow affect. And as she walks out, she callously flicks the girl’s ice cream over, grinning to herself, knowing she could just as easily have sliced the child’s throat as she glided past because for her these are just actions, each equal to the next – little pleasures that come with her powers, her considerable skills.

Seasons later, having seen those considerable skills of hers put to both good use and shockingly bad girl bad use, we see Villanelle reintroduced in a very different light in the latest and final season, as she sings to a church congregation. She wants to be good, perfectly, irrefutably good, it seems. Just what game is she playing, we wonder? Whatever it is, we know it will end in blood. (And my goodness, does it.) 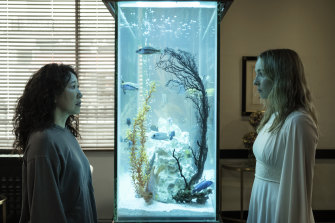 Sandra Oh (left) and Jodie Comer in a scene from the final season of <i>Killing Eve</i>.Credit:

The character of Villanelle, according to Codename Villanelle author Luke Jennings, is somewhat based on a hit woman for a Basque nationalist paramilitary group nicknamed La Tigresa (The Tigress) for her “legendary sexual prowess”. He describes her as a “psychopath” and “completely without empathy”. This classic aspect of the psychopathic psyche looms large in Killing Eve, that lack of empathy makes Villanelle genuinely terrifying. It makes her unpredictable. Unreachable.

What is also terrifying, is how she slides so easily and believably into non-threatening social roles to get close to her prey, weaponising her youth, her womanhood, whiteness and a killer dress sense to morph into one of those sweet, pretty, one-dimensional creatures from whom we are used to expecting not much. We know, as viewers, that we wouldn’t clock her as a psychopath until it’s too late. Whether as a pretty waitress, ditzy student, rich alcoholic, nurse or sex worker, she is eerily believable, able to switch accents and body language to fit the role that will best help her to dispatch her commissioned targets, and anyone else who may be unfortunate enough to get in her way – or simply irritate her. The unsettling, emotionless ease with which she snuffs out life is central to her character. And the fact that she – and other psychopaths – are hiding in plain sight instead of under Darth Vader’s mask, or the nefarious slogans in the paintings on my walls, is what makes them most frightening.

I had the privilege of studying psychopaths in the 1990s and early 2000s for my original Mak Vanderwall crime series, spending time with Dr Robert Hare at his UBC Psychopathy Lab at UBC. Hare created the Psychopathy Checklist (PCL-R). At that time, he estimated that psychopaths make up about 1 per cent of the population. They would be found equally in each gender, he argued, though psychopathy – like so much else – is a spectrum. A score of 25 or 30 and above were the ones to watch. The way it manifests as behaviour varies wildly from unfeeling Wall Street white-collar criminal to full-blown serial killer. Eve Polaski mentions Dr Hare’s checklist in the first season, theorising that Villanelle would score high. But though psychopaths exist among all genders, women who kill are notably rare. Psychopathic women who kill professionally, even more so. This means Villanelle is unique, but not entirely without precedent.

What makes Killing Eve so great, in addition to the sensational chemistry of the leading women, is the way it drills down into the darker aspects of both the psychopathic Villanelle and those who are fascinated by her – most notably Sandra Oh’s magnetic and brilliantly portrayed Eve. The full cast has been wonderfully rendered, including poor Niko, Eve’s husband, played by Owen McDonnell, who had the misfortune to find himself between Eve and her exciting and dangerous storyline. These last remnants of Eve’s “normal” life had to go in service of the plot (boy, did he suffer for that) and her becoming. While this part of Eve’s trajectory brought real tension, exploring questions about how much we really know others, or ourselves, this show has unquestionably been all about the women: Villanelle, Eve, Carolyn. The women of MI6 and MI5. The women of organised crime. Women who kill. Eve runs intellectual circles around her male colleagues, and their constant underestimating of her and Villanelle does nothing to lengthen their life spans. 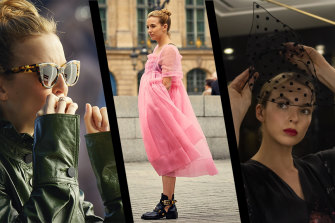 Villanelle is a villain unlike others we have seen before.Credit:BBC America

One question circling at the back of the mind here is whether this means Killing Eve is a feminist show. Well, yes and no. It certainly passes the Bechdel Test – albeit that was not actually meant by Alison Bechdel as a “feminist” test. But while it plays with feminist ideas – how could you not with such a powerful female cast? – it isn’t really about feminism or even about women. Nor does it have to be. It’s about these particular women – the women we don’t usually see – and a dark relationship that utterly breaks the mould. That makes it bloody refreshing.

The kills in Killing Eve are also both bloody and, dare I say, refreshing in their novelty. In The War Widow, my heroine Billie Walker uses a hat pin as a weapon – handy for self-defence – but this is nothing compared to Villanelle’s purpose-made poisonous “ornate hair pin”, which she inexplicably left embedded in the eye socket of a victim at a crime scene in season one. In fact, there have been so many unique assassinations since then that it’s hard to pick a favourite. Was it the perfume, perhaps? The tie in the elevator? The Amsterdam red-light district show or the medical kink table in Berlin? The subway? That axe scene that Eve gets tied up in? And the most deserving victims? Well, that would involve perhaps too many plot spoilers, but I will say that Nice and Neat (season two, episode two) was the episode I have so far personally found the most chilling. Thing is, just when I start to despise Villanelle for her deeds, (there are plenty of reasons for that), she gives us her Uma Kill Bill-esque death stare in a situation where you can’t help but root for her. She is often placed as the lesser villain and the better fighter against deadly men who you can’t help but want to strangle yourself. Villanelle is flamboyant and unpredictable, and you want her on your side in a fight. Then, if you are sensible, you want to get a sizeable distance away from her. But who wants to be sensible? 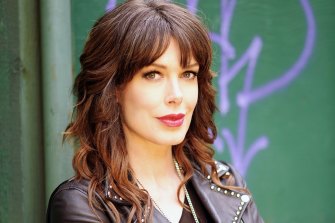 While that utterly unique first season can’t be topped, I’m still hooked, diving in to eps like the proverbial junkie. Don’t ask me to shut it off. I’ve seen too many episodes of CSI and XYZ (they all simply blend after a while, don’t they?) with male authorities looking down at beautiful female corpses, to be troubled by some blood and a little fictional emasculation. Flipping the tables in fiction brings some novel pleasure, especially when so many of the men Villanelle kills are, let’s face it, absolutely deserving.

When the writing is at its best, Villanelle is one of the most complex and compelling villains I’ve come across. Flamboyant, but not Disney-esque or cartoonish. Strong and capable, but not able to achieve impossible feats of strength like something from the minds of Marvel. Sexual, but not dressed for the male gaze. Villanelle’s brutal background gives her extraordinary skills that she uses to her advantage and, frankly, to stave off her easily triggered boredom. This makes her just believable, despite the need for the show to stretch those skills of hers to their fullest.

Villanelle is not a perfect villain because she is perfect but because she isn’t. And
she doesn’t want to be. From early episodes, it seemed likely that this final season would test some viewers – including this one. Killing Eve may have aired its final episode, but I am not quite ready to let go. Can I bring myself to watch the ending that even author Luke Jennings has spoken out about? I dearly want to see one of my all-time favourite on-screen villains get the send-off she deserves. But does she? Or will I watch, as so many have, and dream of a different ending for these blood-soaked, star-crossed lovers?

Tara Moss is the bestselling author of 14 books of fiction and non-fiction, and winner of an Edna Ryan award for her contributions to feminist debate. Her new novel, The Ghosts of Paris, is out in June.

To read more from Spectrum, visit our page here.