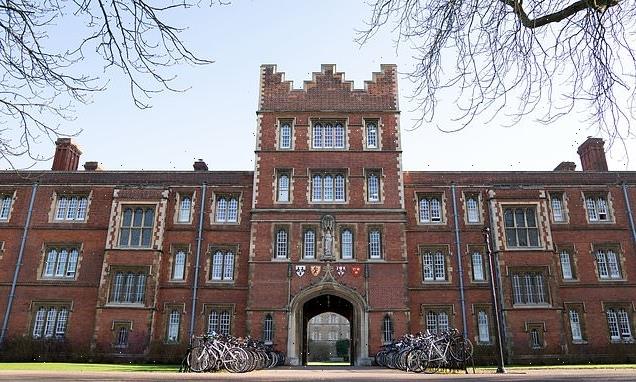 Dishonesty, hypocrisy, and why the decision not to remove memorial to 17th century benefactor Tobias Rustat over slave trade links from my old Cambridge college must inspire an anti-woke revolution, writes DOMINIC SANDBROOK

There are, to my mind, few more beautiful places in Britain than the chapel of Jesus College, Cambridge.

It’s not the grandest of Cambridge chapels. But with its patterned floor and vaulted ceiling, its polished pews and William Morris windows, it is somehow perfect — not just as a monument to the glory of God, but as a place of serenity, a refuge from the shouting of the modern world.

It’s more than 20 years since my days at Jesus, where I studied for my doctorate. I can’t claim to have been a dedicated chapel-goer, but I always found it the ideal place to clear my mind, alone with the ghosts of centuries past.

Never would I have imagined that the chapel would become the front line in the struggle against the woke fanatics trying to remake Britain in their own image — a battle decided yesterday with a scathing verdict from an ecclesiastical court.

Nor would I have imagined the villains of the story would be the people running my college, caught trying to twist its history in pursuit of their ideological crusade. 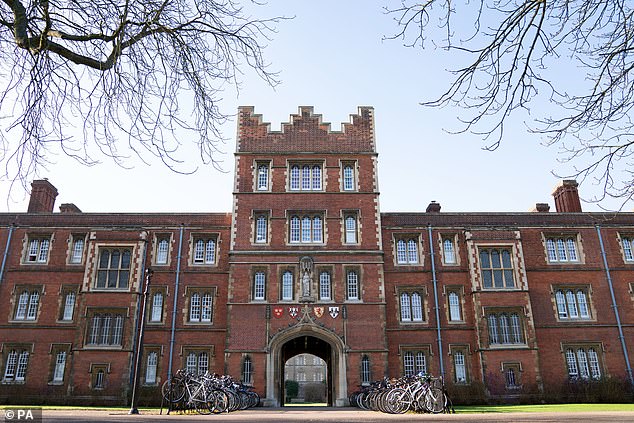 Controversial: Jesus College (file photo pictured above) at the University of Cambridge wanted to remove a memorial to Tobias Rustat

It’s an extraordinary story, capturing so many aspects of the ‘woke revolution’ — its profligacy, its hypocrisy, its indifference to nuance and its contempt for truth. But it’s also a story about a remarkable man, betrayed by the very people who have benefited from his generosity.

Born in 1608 to a former Jesus student, Tobias Rustat was an ardent Royalist during the Civil War and widely admired for his ‘duty, fidelity and loyalty to his King’.

Rustat made a lot of money from all sorts of investments. But he was also a dedicated philanthropist, who gave thousands of pounds — the equivalent of millions today — to the poor, the sick, widows and orphans, as well as to his father’s old college.

Rustat’s donation to Jesus College transformed its fortunes, and his name has been revered for centuries. In my student days, there was a portrait of him in the Senior Common Room. There was a Rustat Feast, and a Rustat scholarship. There were even annual Rustat conferences, in recognition of his role in the college’s history.

But all have since been renamed, because of Rustat’s links with slavery.

That story began in 1663, when Rustat bought a 1 per cent stake in a company which seems to have traded slaves and minerals out of West Africa. The business collapsed and he lost almost all his investment. But when it restarted as the Royal African Company, shipping thousands of slaves, he invested once again, and this time made a profit.

Of course, it all seems abhorrent today. But at the time, when the abolition movement was virtually non-existent, such investments were common — the equivalent, perhaps, of modern investments in fossil fuel firms, which our successors may not judge kindly.

Two other points about Rustat. First, less than 2 per cent of his fortune was connected with the slave trade. Second, not a penny of the Cambridge money had anything to do with slavery. In fact, he only invested in the Royal African Company after his donation. 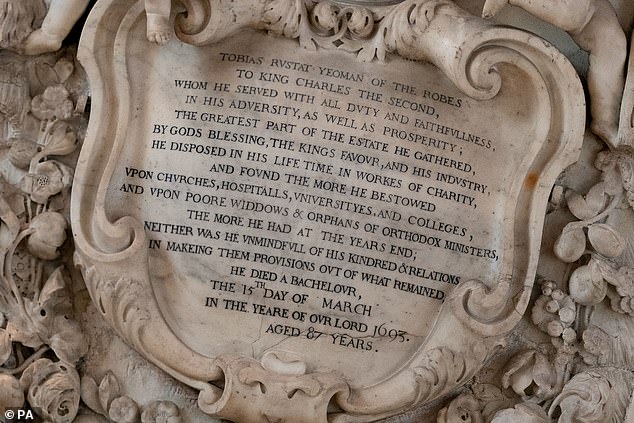 The memorial to Tobias Rustat. Born in 1608 to a former Jesus student, Rustat was an ardent Royalist during the Civil War and widely admired for his ‘duty, fidelity and loyalty to his King’

None of this, however, could save him when the Black Lives Matter protests broke out. For the college authorities — notably the Master, Sonita Alleyne, a former media executive — Rustat had to go. They wanted to parade their virtue, and he was the perfect scapegoat.

Renaming the scholarships and conferences was easy. The problem was the Chapel.

For high on the west wall is a marble memorial to the college’s most famous benefactor, carved by Grinling Gibbons. It remembers Rustat for his charitable gifts, but the College wanted rid of it.

They’d probably have done it, too, if it hadn’t been for 65 alumni, who fought the case to a hearing of the Consistory Court of the Church of England’s diocese of Ely.

As the alumni rightly argued, the college had distorted the story. As one old Jesuan told the Mail, tearing out the memorial would be ‘a vindictive gesture by an institution that has lost its way’.

The irony, is that Jesus is happy to take money from the Chinese Communist Party, an organisation that has herded hundreds of thousands of Uighur Muslims into concentration camps. Jesus has taken £200,000 from the Chinese state and £155,000 from state-backed telecoms firm Huawei. So much, then, for the college’s principles! 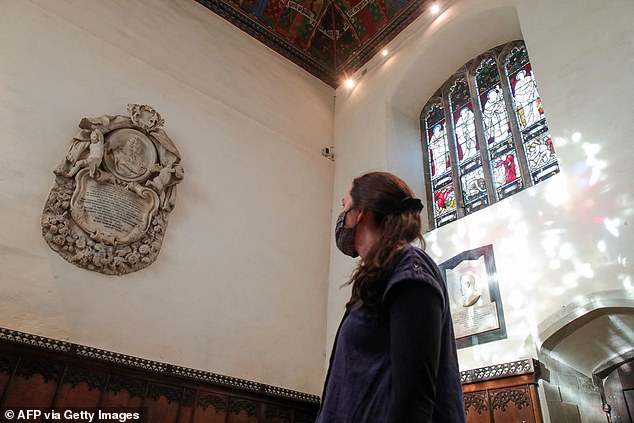 An employee looks toward the memorial to Rustat displayed inside Jesus College Chapel at Cambridge University. It remembers Rustat for his charitable gifts, but the College wanted rid of it, writes Dominic Sandbrook (file photo)

One of the witnesses at the hearing was the Oxford historian Professor Lawrence Goldman, an old tutor of mine. As he told the court, the attempt to cancel Rustat was an ‘assault’ on the college’s history. He was withering about the college’s attempt to ‘judge the past by the standards of the present’, which ran ‘counter to the principles of historical scholarship’.

‘Perhaps unsurprisingly,’ the judge noted, ‘there was no real cross-examination of Professor Goldman’. For in his understated way, he had exposed the illiteracy and mendacity of Jesus’s case for all the world to see.

Equally unsurprisingly, the verdict of the judge, the Worshipful David Hodge QC, makes for blistering reading. At the core of Christianity, as he points out, is the principle of forgiveness. ‘Such forgiveness,’ he writes, ‘encompasses the whole of humankind, past and present, for we are all sinners; and it extends even to slave traders.’

But to this principle the Jesus College authorities were blind. Not only were they content to vandalise their own building and to misrepresent their own history, they were happy to stamp on a central idea of Christianity itself, as long as they could preen themselves on their own righteousness.

The extraordinary thing is that the Archbishop of Canterbury supported them. ‘Why is it such agony,’ asked Justin Welby last month, ‘to remove a memorial to slavery?’

But as the judge points out, it was never a memorial to slavery, but one to philanthropy. So either Welby was being deliberately dishonest, or he was being stupid. He’s either a liar or a fool. I’m not qualified to say which. 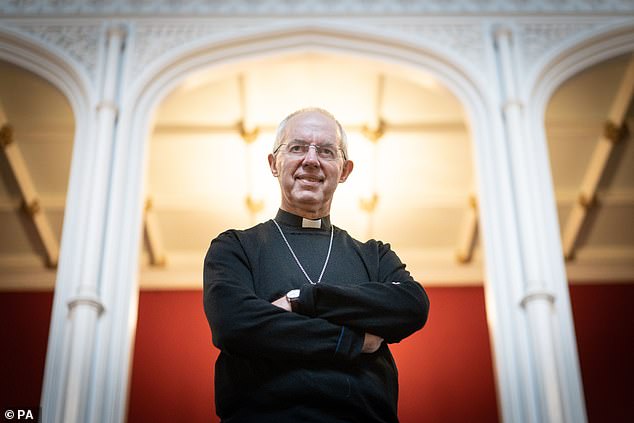 The extraordinary thing is that the Archbishop of Canterbury (file photo above) supported them. ‘Why is it such agony,’ asked Justin Welby last month, ‘to remove a memorial to slavery?’

For Jesus College the case has been an embarrassment. The college’s leadership have wasted tens of thousands of pounds in a case they deserved to lose — money that could have been spent on scholarships for working-class students.

In their arrogance, they have besmirched the name of my old college, and betrayed the legacy of generations. They’re a disgrace to the values of a great institution. They should go, and go now.

But there’s a wider point. For too long our educational and cultural institutions have grovelled at the feet of the woke movement.

They’ve torn down statues, taken names off buildings, told bare-faced lies about our history and filled our museums with self-righteous captions wittering about Britain’s supposed crimes and misdemeanours. And to be frank, we’ve let them get away with it.

All the time the woke bandwagon rolls on. Only yesterday it emerged that Lambeth Council wants to rename Tulse Hill, in South London, because the 17th-century merchant Sir Henry Tulse invested in the slave trade.

And as if that’s not mad enough, the council also wants to encourage ‘conversations’ about streets named after Horatio Nelson, because of his involvement in ‘defence/military actions’. Well, what do they expect from an admiral in the Royal Navy?

So while I take my hat off to the alumni and academics who fought my old college and won, I also hope they’ll serve as an inspiration for others in the struggles ahead.

The battle of Jesus College Chapel may have been won. But the wider war continues. We can stop these people, and we must. All it takes is the will to do it.