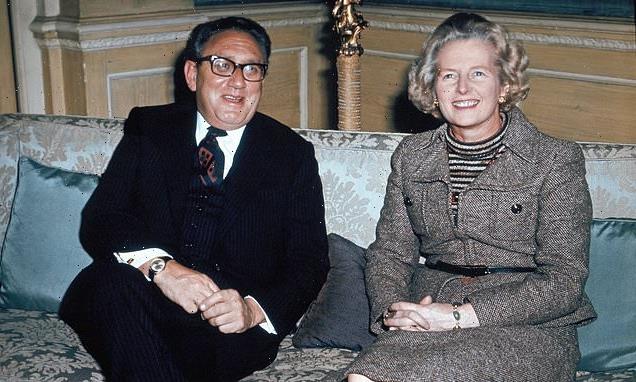 Why there was only one Iron Lady, by Henry Kissinger… Liz Truss saw herself as the heir to Margaret Thatcher. But as this political titan makes crystal clear, there is no comparison

The revival of Britain brought about by Margaret Thatcher was at once an economic and spiritual undertaking.

When she became Prime Minister, national decline was not merely a matter of a sputtering economy. Decline was a collective, self-reinforcing and ultimately debilitating belief. Its hallmarks were high inflation, slow growth and crippling labour strife.

The political centre of 1970s Britain simply was not working.

Rejecting that exhausted consensus, Thatcher conjured up a positive vision for the future and took Britain where it had never been before.

This required both courage and character: courage, in departing so dramatically from the received wisdom of the time, and character, in staying the course consistently as her tough medicine drew sharp complaint from the patient. 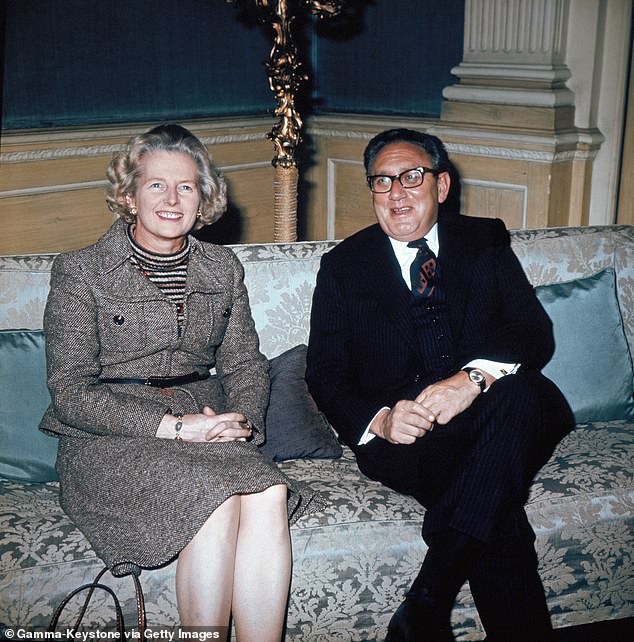 Again and again, Thatcher displayed calm nerves and unyielding commitment to her convictions – even when conditions were ambiguous, downside risks loomed large and public support appeared to be waning.

Her strategy of tightening the money supply to curb inflation at the beginning of her time in office saw no U-turn.

She prosecuted a vigorous response to aggression in the Falklands. And she assured Britain’s power supply during the miners’ strike, sustaining her policies even when public opinion threatened to turn against them.

To be sure, tenacity alone is rarely sufficient for success. To sustain her strategy to renew Britain, Thatcher had to rally supporters within the Conservative Party – particularly for domestic reform, which is inherently more polarising than mobilisation against an external foe.

Her rhetoric had an impact on supporters that recalls the philosopher Isaiah Berlin’s description of Churchill’s words rousing the nation during the Second World War: ‘So hypnotic was the force of his words, so strong his faith, that by the sheer intensity of his eloquence he bound his spell upon them until it seemed to them that he was indeed speaking what was in their hearts and minds. Doubtless it was there; but largely dormant until he had awoken it in them.’

Likewise, in Thatcher’s time, dismay at Britain’s dysfunction was already in the air. Her achievement was to channel it for the cause of domestic reform. Her rhetoric mobilised enough support from her wing of the Conservative Party to sustain her ambitious agenda, realigning the political centre for decades. 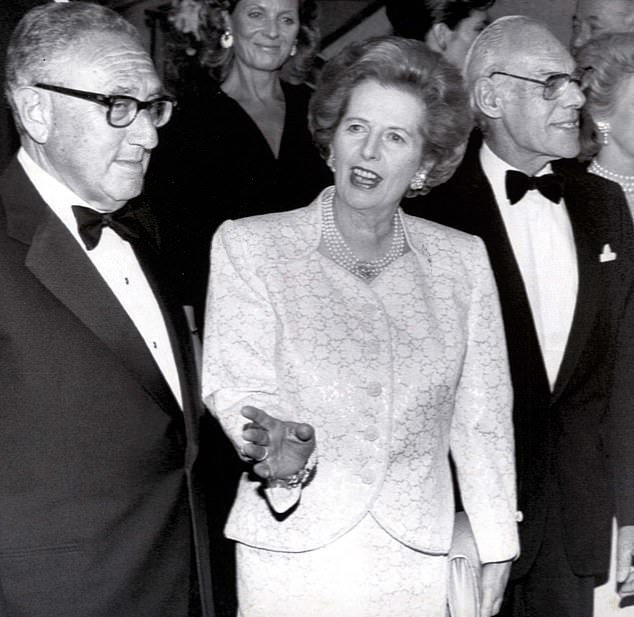 She balanced a strong government presence in society with individual freedom in the economy – not, perhaps, what most of her Tory contemporaries were advocating but certainly ideals that the party had followed in earlier periods of its history.

In the process she assembled new coalitions of voters who had not traditionally voted Conservative, enabling her to win three elections in a row and laying the basis for a fourth victory shortly after her retirement.

She had seen the future, and made it work.

Not that she was lacking for enemies. Even Conservatives sometimes accused Thatcher of betraying her party’s basic principles.

She was, of course, an outsider: both as a woman who had trained as a scientist, and as one coming from a middle-class background, her father a grocer. Yet her actions, though assuredly disruptive, spoke of a total commitment to her party. Rather than betraying its principles, she was working steadfastly to restore them.

Thatcher’s ideals echoed those of the greatest Conservative leaders since Disraeli – preservation of the United Kingdom, international engagement on the basis of democratic principles and domestic governance founded on individual self-sufficiency – supplemented by acknowledgment of Britain’s post-war consensus on the need for a stable health service and welfare state.

Thatcher saw no conflict between her free-market principles and the obligation of environmental stewardship. A great champion of the Montreal Protocol, Thatcher deserves her share of credit for the remarkable healing of the ozone layer in recent decades. Towards the end of her premiership, she became one of the first world leaders to speak out passionately on the dangers of climate change, saying, in 1988, that mankind had ‘unwittingly begun a massive experiment with the system of this planet itself’. 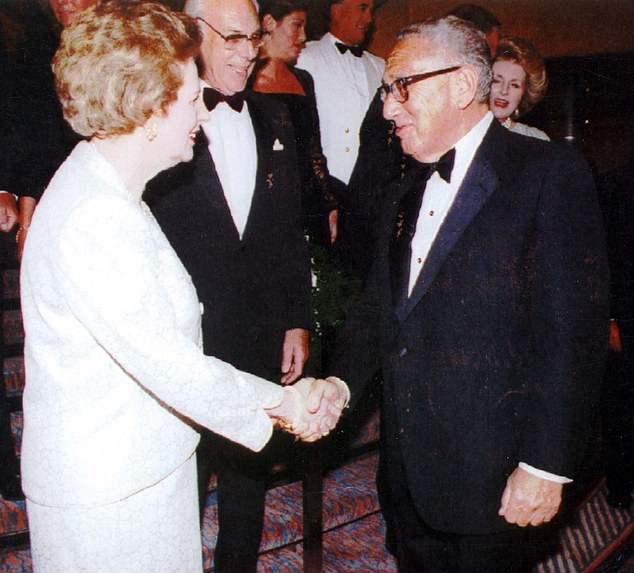 HENRY KISSINGER: Thatcher conjured up a positive vision for the future and took Britain where it had never been before

Thatcher’s foreign policy was a crucial testament to the importance of the British-American partnership within the Atlantic alliance. The reinvigoration of the ‘special relationship’ secured her influence on the global stage.

There was nothing about Great Britain’s natural resources, economic performance or military prowess that would have qualified it for superpower status in the 1980s. Yet through her forceful personality, her skilful support when it mattered and her essential relationship with President Ronald Reagan, Thatcher acted as if Britain were on a par with the United States. And, for the most part, the Reagan administration happily suspended disbelief.

Some leaders adjust to their retirement from politics with relative ease and elegance. They may even grow in stature, successfully writing a new, compelling chapter in their life’s story. Thatcher was not one of those leaders. She lived for her vision and, out of office, struggled to find anything as meaningful as the challenges she had encountered while in 10 Downing Street.

I continued to call on her on every trip to London, even in the years after illness had clouded her mind. During our final meetings, I saw a leader who had faced down life’s trials with courage and grace.

To millions of her fellow countrymen and women – and countless admirers abroad – she would always be a great and historic figure: an economic reformer of lasting significance, a premier ennobled by her resolve and daring when British sovereignty was threatened, the Iron Lady of the Western world.

All who dealt with her recognised her outer toughness, all could sense the inner strength that carried her through the tribulations of leadership. To her critics, Thatcher’s fortitude at times cloaked her human qualities, but her exceptional steeliness co-existed with the overlooked attribute that lies at the heart of her leadership: love of country.

Exceptionally strong conviction and competitive drive were surely part of Margaret Thatcher’s success in winning power. Discipline and calculation helped her to retain it. But only love of her country and her people can explain how she wielded power and all that she achieved with it.

That the Queen made the decision personally to attend her funeral – an honour extended to no previous Prime Minister except Winston Churchill – testifies to Lady Thatcher’s historic impact.

The last hymn at her funeral service in St Paul’s Cathedral on April 17, 2013, captured her outlook:

I vow to thee, my country, all earthly things above,

Entire and whole and perfect, the service of my love:

That lays upon the altar, the dearest and the best.