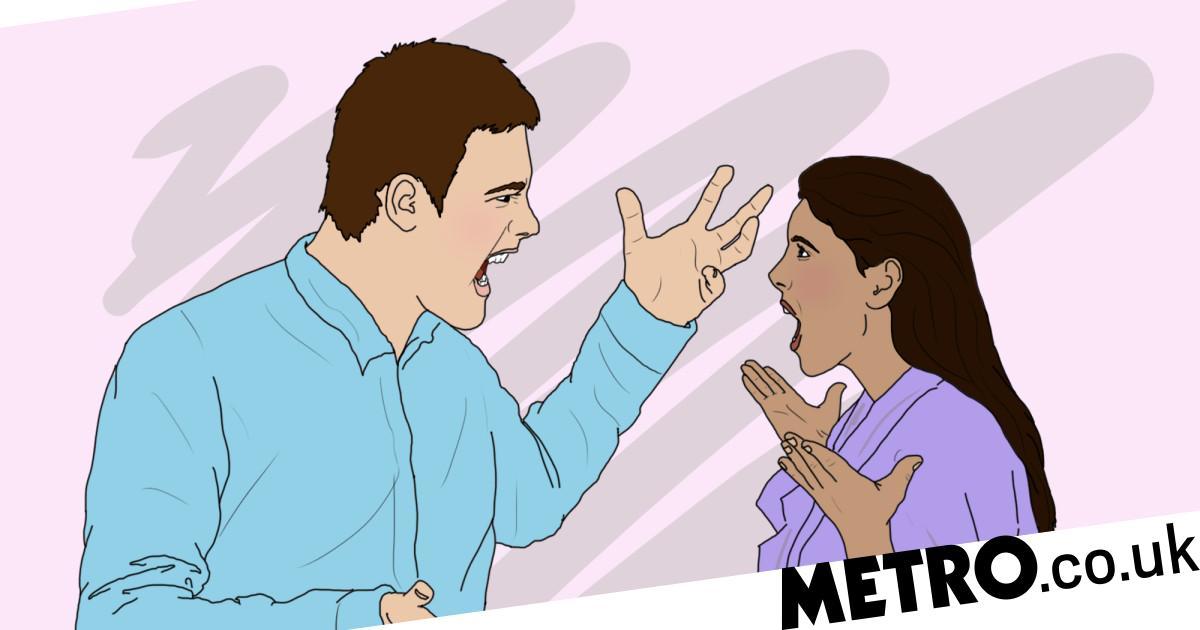 If you’re in a relationship, at some point you will argue.

That’s not a bad thing. It’s healthy to argue, and, in fact, being in a relationship with absolutely zero arguments could be a sign that things aren’t going that well.

It’s essential in a partnership that both people are able to voice their views and discuss their disagreements.

But there’s a big difference between healthy arguments and those that become nasty slinging matches.

The key to avoiding the latter – and making sure your arguments are actually constructive to your relationship, not destructive – lies in knowing what your and your partner’s arguing styles are.

So, what are the different arguing styles out there?

Psychologist and dating coach Jo Hemmings tells Metro.co.uk that invalidation can be a common method of arguing, depending on ‘trying to unnerve your partner by devaluing or ridiculing what they have to say and the feelings behind those words.’

An invalidating arguer will bring up their partner’s previous faults or their character flaws to convince them that what they’re saying is entirely ridiculous.

This is the arguing style used in gaslighting.

What it says on the tin. If you have a dominant arguing style, you’re more able to take charge of an argument. You’ll be quicker responding and your partner might need a moment to catch up.

This style depends on refusing to argue, and often manifests as giving the silent treatment.

‘This can be very frustrating for the other partner who finds it impossible to find any opinion, communication or connection in the silent one,’ says Jo, ‘often rendering them even more angry. It’s almost impossible for anyone but the silent partner to “win” that argument.’

Hitting below the belt

This type of arguer lashes out, bringing up past issues that they know will derail the present conversation.

They’ll deliberately delve into areas that are sensitive, exploiting vulnerabilities and thus breaking the trust of their partner. They might threaten to leave their partner as part of the argument, too.

This style requires you to pretend you don’t care about the outcome of the argument.

You might say it’s a ‘silly’ fight anyway, that it doesn’t matter, or you’ll agree in an offhand way that shows you’re not taking any of the disagreement seriously.

Jo says a disinterested arguer will ‘behave as if they have given in without actually agreeing, which effectively robs their partner of their “win” as it diminishes the value of the subject which may be important to them, leaving them feeling foolish or frustrated.

If you’re a pleaser, you’re the type that just hates all conflict and can’t stand disagreeing with your partner. You’re likely to just agree to whatever they say to stop a fight in its tracks and avoid further anger.

You might not fit into one of these categories (well done, you might be the perfect arguer with not a single unhealthy habit) or you might fit into multiple, employing different tactics depending on the argument.

You also might find it far easier to tick off your other half’s arguing style than your own.

Psychology Today has a rather handy quiz that breaks down your arguing style, in case you have no clue.

Once you recognise your arguing style and your partner’s, what comes next is working out how to deal with a clash, understanding which arguing behaviours are destructive rather than constructive, and stopping them before they get out of hand.

‘Some styles, like hitting below the belt or invalidation are especially destructive approaches to arguing,’ explains Jo. ‘Other styles maybe more productive ultimately.

‘Whichever style you’re using, the arguments that are less volatile and more like a ‘heated discussion’ and have some sort of resolution are the most productive ones.

‘It is these kinds of productive arguments that distinguish couples who are more likely to stay together than those that have a more destructive style.’

Shirlee Kay, a couples therapist working in London, simplifies this with one question: is your argument reactive or reflective?

Reactive arguing is when couples aren’t thinking through their responses, but just batting back at the verbal hits. If you’re in a reactive argument, you feel hurt, vulnerable, and feel you need to protect yourself. You might then use one of the damaging arguing styles above, such as hitting below the belt, gaslighting, or saying painful things to each other.

Reflective arguing is what the name suggests. ‘This is when couples are conscious of their own feelings and are able to slow down and pause before responding,’ says Shirlee. ‘This is when couples are able to listen, acknowledge, see the other’s point of view, compromise and let their partner know that their argument isn’t endangering the relationship.’

You can probably guess which arguing style is better – arguing in a reflective way means you’re prioritising the relationship above ‘winning’ the argument, and are taking the time to remain calm, consider the other person’s feelings, and respond in a way you won’t feel awful about immediately after.

When you notice an argument has become reactive, or you’re noticing yourself or your partner falling into one of the arguing styles above, it’s worth speaking up, pressing pause, and having some time to remember that you’re not actually enemies.

Dating coach Hayley Quinn says it’s worth thinking of arguments as a way to grow and improve.

‘Think of the relationship as a co-operative project you are working on,’ she explains. ‘None of us are perfect and to take stock of how you can improve is often more productive than hoping that your partner will change.’

Part of that is understanding when arguments are about things that are actually worth discussing, or if you’re taking issue with who your partner is.

Changing actions takes work, while changing who someone is is near impossible. Take a moment to reflect on what the purpose of the argument is – are you hoping to radically change the person you’re with (an unrealistic goal) or change a certain behaviour that’s bothering you?

You can often spot that by the language being used in an argument.

It’s not wise to label people in an argument – ‘you are’, ‘I wish you were’ – and instead focus on their actions, speech, and how they affect you – ‘when you … it makes me feel…’.

If you find that the problem isn’t easily summed up in the latter terms, but your frustration is that the person you’re with is inherently selfish, cruel, or uninterested, that’s a sign that the argument won’t go anywhere – and the relationship may not be built to last.

Arguing in itself isn’t a bad thing. It’s just essential to think things through, be aware of your own arguing techniques and how you’re feeling, and take steps to keep your arguments in a healthy place.

How to have healthier arguments

‘Arguing when you’re tired, when you or your partner have just walked in the door after work, in front of the children or friends and family or just being out in public are generally not good times to have arguments,’ says Jo. ‘Sometimes planning a time to have a discussion or recognising the signs of the beginning of an argument, especially one which might escalate quickly and agreeing to defer it to another time, can take the heat out of the eventual argument and ultimately lead to a more productive outcome, with less hurt and anger.’

Start a discussion when you’re not under any time pressure, you’re not in public, and you don’t have any external factors that could make things more heated.

It can help to wait for a few hours after the initial anger before delving in deep, but don’t go too far and wait days or weeks to dredge up a tiny thing you’ve been simmering over.

Talking over the person you’re dating, shutting down an argument entirely, or just failing to take in what they say are all ways for arguments to spiral and make the person you love feel like they’re getting nowhere.

Give them the respect of listening, even when you’ve said all you need to say. Let them vent, take in their feelings, and then discuss a compromise.

Look, it’s perfectly normal for an argument to get heated and to find yourself shouting, crying, or generally feeling out of control. But this isn’t the way to get to an agreement.

It’s okay to pause, take a breath, and even ask your partner if you can stop for a moment and come back to the topic.

Try to stay calm and pause if you notice yourself slipping into toxic habits, such as raising past issues, pointing out character flaws, or shutting down.

We mentioned this earlier, but it really is important.

Focus on your language, choosing ‘when you do this, I feel this’ rather than ‘you’re a terrible person’.

Hayley advises: ‘Instead of judging a person’s character, state the objective behaviour that you didn’t like, and say how it made you feel.’

Jo recommends discussing the outcome of an argument directly after it’s happened, to make sure you’re both on the same page and neither of you are still feeling upset.

This isn’t the time to keep going over and over what’s been said, but to acknowledge that you’re both partly responsible for the problem, to agree on a solution, and to apologise for any upset caused.

If you’re arguing about a certain incident or issue, do try to stay on message.

Dragging up old disagreements or transgressions, or bringing in other unrelated topics, will make your argument snowball and pick up speed.

Don’t get too hung up on winning or losing, or right or wrong. You’re on the same side, and your aim shouldn’t be to hurt, but to heal.

Remember: you love this person! Be nice to each other.