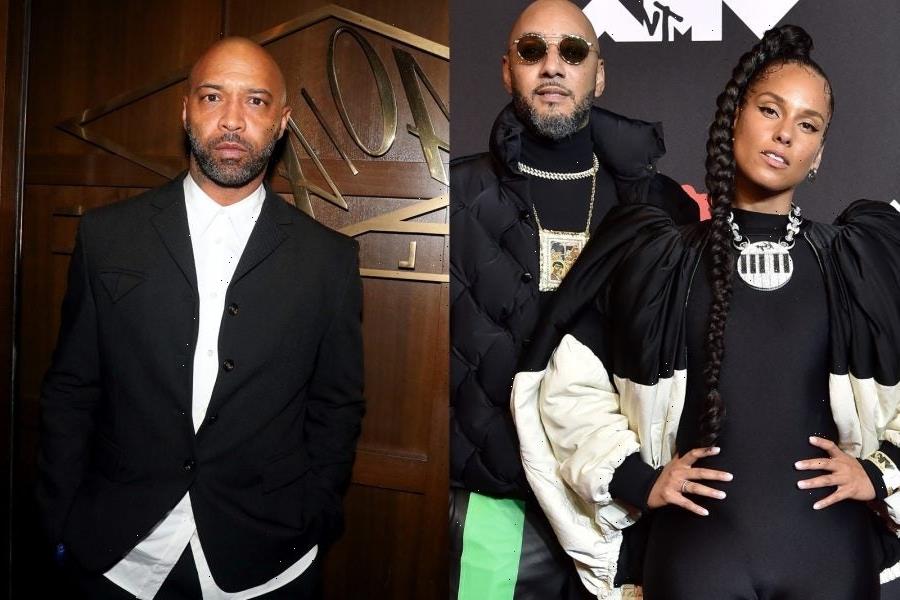 Former rapper (and reality TV personality) Joe Budden is one of many controversial podcasters skilled at stirring the pot. Unsurprisingly, he recently found himself in an almost tiff with legendary producer Swizz Beatz, but it had nothing to do with his comments on the mic. Budden liked a tweet a Twitter user named @HeyJasmine’s posted about Alicia Keys that read, “Alicia keys really got cooked on Diary.”

Here’s where it gets spicy. Not only did Budden like the tweet, he also replied to it saying, “Lowkey lol.”

As an Alicia Keys stan and a standup husband, Swizz Beatz caught wind of his comment to defend his wife.

In a tweet, he responded, “King knock it all the way off! Let’s not do this! I never get into your zones! Leave my wife out of everything but greatness! Please ……..”

This isn’t the first time Swizz has publicly defended Keys. If you’ll recall, back in 2016 when she hit the red carpet at the VMAs with no makeup and naysayers had something to say about it, he spoke up.

“Why are you mad at someone who decided not to put makeup on their face?”

Now, back to the main topic. While it may have been honorable, Swizz’s response to Budden garnered mixed reactions from social media users, many claiming that the producer was doing way too much. Was he really though?

We often scream “protect Black women,” and here a husband is, protecting his wife’s name—no matter how minor the situation may seem—and people still have an issue with it. What is the right way for men to defend their wives in 2022?

Walking up on stage and slapping is definitely off limits judging by the reaction to Will Smith defending his wife Jada Pinkett Smith at the Oscars. Not to mention the mockery the actor received when he defended Jada when Gayle King accused her of infidelity during an interview for King Richard. A respectful but firm tweet asking a man not to publicly talk down or joke about his wife’s work is also unreasonable judging by the majority’s reaction to Swizz’s message.

Maybe we really don’t want men to defend Black women because the humiliation, disrespect and discrediting is a lot more entertaining.

If we want to play the devil’s advocate, some people could argue that the tweet and Budden’s response are both matters of opinion (which everyone is entitled to) and not a personal attack on Keys’ character, thus, it didn’t elicit that response from Swizz. Even if that is true though, I think Black women get more than enough negative press, so why not jump on a tweet that uplifts instead, especially as an influential Black man? Nobody is saying Black women can’t be constructively criticized, but I think we’ve endured enough public humiliation to last many lifetimes. And over a song that’s almost 20 years old? It does feel pretty petty.

And you know what? I am a Black woman, and I know how little advocacy we get from other races and sometimes our own, so I’m always going to ‘yaaaaas’ a man defending his Black woman.

I also think we have to let go of the idea that there is a one-size-fits all way to defend women. The same energy we often give to defending other vulnerable groups in society should be extended to Black women, because we are vulnerable too. For instance, we often “don’t play about our kids” and think it’s ok to go to any ends to defend them.

Turning up the volume for the people at the back, Black women are at a disproportionate risk of sexual violence, less likely to receive mental health treatment, more likely than white women to die during childbirth, more likely to be in poverty, more likely to report workplace harassment, and the list goes on. How often do we see people rallying and going hard to defend us? Since it’s not often enough, I think we should commend men who are going to war for us. Because women are blatantly at a disadvantage and we don’t have a level playing field, we deserve protection, be it from internet trolls, insensitive jokes, character assassination, or just bringing attention to an arguably negative tweet.

It seems we want to police how men protect their women, but isn’t any protection at all a step in the right direction? Swizz, Smith, and other men who publicly defend their women may not do it in “perfect” or socially acceptable ways, but there is no perfect way. There is only a human way and while the consequences of whichever way men choose to defend their women won’t always be pretty, it sends across a clear message. It tells people that Black women matter and they deserve respect. I’ll always be here for that.