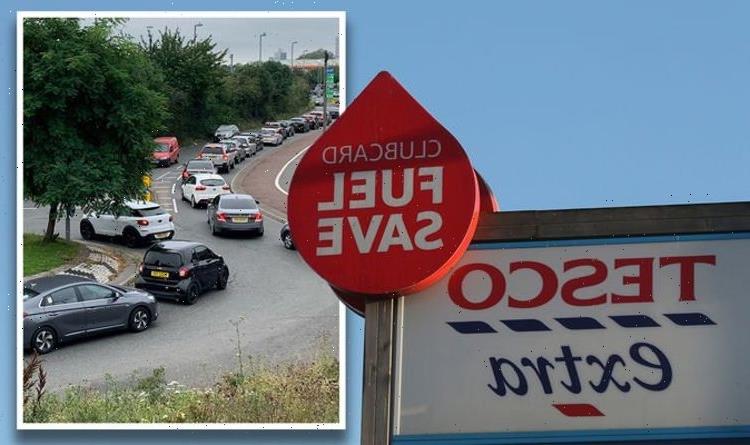 Petrol companies have been urging Brits not to panic-buy fuel after a shortage in HGV drivers has led to a reduced supply of petrol. Some petrol stations have implemented rationing to combat the increased demand, while transport secretary, Grant Shapps, said people should “carry on as normal”.

While some operators have warned of fuel shortages, this is a fraction of the petrol stations across the UK.

BP has said up to 100 of its stations had run out of at least one grade of fuel, and several had been forced to close.

Esso owner Exxon Mobile has said a “small number” of its Tesco forecourts had been impacted.

Tesco runs more than 600 petrol stations across the UK, usually found close to their stores.

Stores can vary from being open 6am to 10pm to opening later at 10am on Sundays.

You can check where your nearest Tesco petrol station is and its opening hours on Tesco’s website here.

Asda has 320 petrol stations across the UK.

Some of these are open 24 hours a day, while others close anywhere between 5pm and 11pm.

These range from opening at between 6am and 10am and closing at 7pm to 12am depending on the site.

You can check where your nearest Morrisons petrol station is and its opening hours here.

Some stations run by the EG group like BP, Esso, Shell and Texaco have introduced a £30 petrol limit to make sure its customers “have a fair chance to refuel”.

Arguments have broken out at petrol stations across the UK, despite industry officials urging Brits to buy as normal.

The UK Petroleum Industry Association has said distributors are working hard to replenish stocks after the president of the AA blamed panic-buying for the shortage of fuel.

In a statement on Saturday, a spokesperson said: “There has been an increase in demand for fuels this week which is above and beyond what is usual.

“There are no reported issues with the production, storage, or import of fuels while distributors are working hard to replenish stocks at forecourts.

“Customers should continue to buy fuel as they would normally.”

President of the AA Edmund King said on Saturday there there “is plenty of fuel at the source” and no need to stock up.

When speaking to BBC Breakfast, he said the current queues at petrol stations were unlikely to last.

He said: “The good news is you can only really fill up once – you’ve got to use the fuel, so this should be a short-term thing.

“It’s not like the fuel crises in the past when the supplier was hit by strikes, etc.

“So, once people have filled up, they won’t travel more than they normally travel, so this strain on the system should ease up in the next few days.”