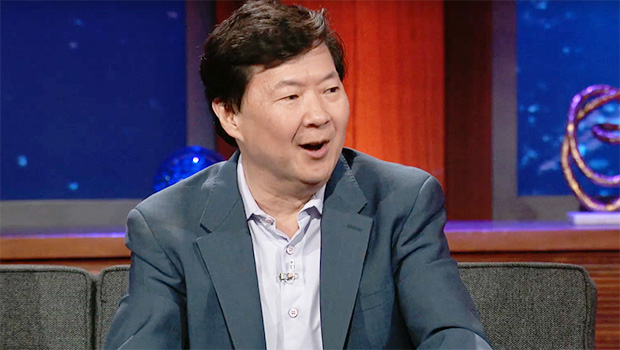 Ken Jeong’s opening up about ‘The Masked Singer!’ In our EXCLUSIVE preview of the all-new episode of ‘What Just Happened??! With Fred Savage,’ the panelist admits why his takes ‘big swings’ with his guesses.

Ken Jeong is well aware that he’s the celebrity panelist on The Masked Singer who takes big swings with his guesses. “If I don’t know the contestant, I’m always like Ruth Bader Ginsburg,” the comedian and actor says in our EXCLUSIVE preview of the July 14 episode of What Just Happened??! With Fred Savage. “That’s like my go-to.” During their chat about The Masked Singer, someone elaborately dressed in an elephant costume offers Ken and host Fred Savage a grape. They simply can’t resist.

Suddenly, a sparkling lobster shows up on stage with guacamole. But the lobster has made a huge mistake. He didn’t bring chips with the guacamole and that sets Ken and Fred off on a tangent. Ken quickly wants to get back to business, though. “Can we just get through the f-ing interview!” he says. What Just Happened??! With Fred Savage is the aftershow of the fake FOX drama The Flare. The series is a half-hour hybrid comedy/talk show dedicated to exploring the fandom surrounding the “show.” Fred Willard also stops by during the July 14 episode, which airs July 14 at 9:30 p.m. on FOX.

Ken will return as one of the celebrity panelists on The Masked Singer for the show’s highly-anticipated second season, which comes back Sept. 25 on FOX with a two-hour premiere. Robin Thicke, Jenny McCarthy, and Nicole Scherzinger are back as the other celebrity panelist as well as host Nick Cannon. The new season will feature 16 new celebrities and 16 new costumes.

The Masked Singer has already been renewed for season 3. The third season will premiere immediately following Super Bowl LIV on Sunday, Feb. 2, 2020.