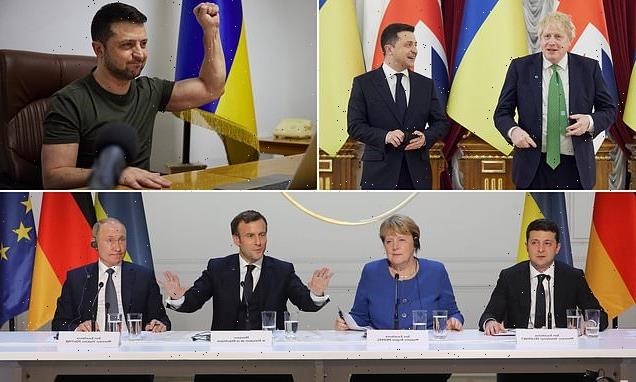 What a blow for Boris-haters that Ukraine has hailed him their greatest ally… and branded Emmanuel Macron a coward, writes DAVID PATRIKARAKOS

Earlier this month, I found myself being truly infuriated by the online musings of a former prime minister of Finland.

Normally the wisdom of Alexander Stubb — a self-professed ‘sports nut’ who boasts about his time completing Ironman races on his Twitter profile — passes me by. But his bizarre outburst was genuinely shocking, and all-too revealing.

Responding to a newspaper article about Boris Johnson, Stubb wrote the following rather unlettered tweet: ‘This idea about “Global Britain” is as true as “Peaceful Russia”. Simply utter rubbish, to put it diplomatically. To claim that Boris Johnson “has taken a lead globally in standing up to Putin” is an illusion only possible in Brexit la la land.’ 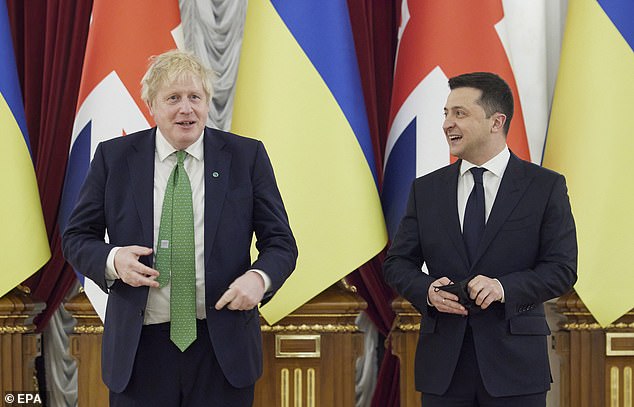 Ukrainian President Volodymyr Zelensky has spoken favourably about the UK and Prime Minister Boris Johnson, saying ‘Britain is definitely on our side’ while hinting other countries are trying to perform a balancing act by staying more neutral 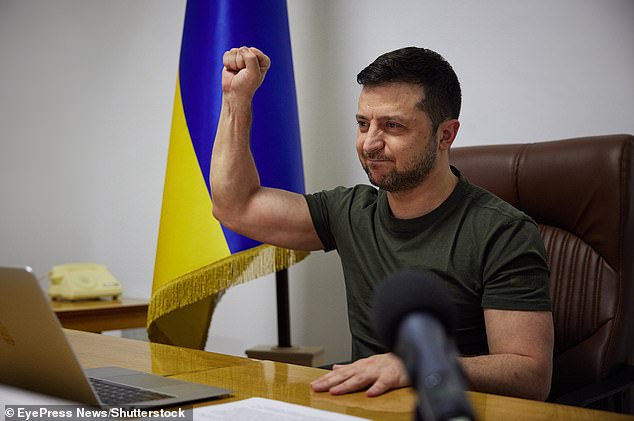 After praising Britain, Zelensky (pictured addressing the House of Commons) criticised France and French president Emmanuel Macron for being scared of Russia

Well, now he — and many like him — are eating their words.

In an interview over the weekend, Ukraine’s president Volodymyr Zelensky was unequivocal when he was asked which countries had offered the strongest support to his nation as it fought for its survival.

‘[Boris] Johnson is a leader who is helping more,’ said Zelensky. He continued: ‘Britain is definitely on our side. It is not performing a balancing act. Britain sees no alternative for the way out of the situation. Britain wants Ukraine to win and Russia to lose.’

Zelensky was also clearly referring to Britain when he added that some countries ‘recognise Nazism in Russia’.

A ringing endorsement, then. But what of our European neighbours?

Have they, too, ‘taken a lead globally’ in standing up to the Russian dictator? Not according to Zelensky.

In the same interview with the Economist magazine, he singled out France’s Emmanuel Macron for stinging criticism, following Paris’s lamentable failure to offer the Ukrainian defenders anything like the same support that Britain has. ‘They [France] are afraid of Russia,’ said Zelensky. ‘And that’s it.’ 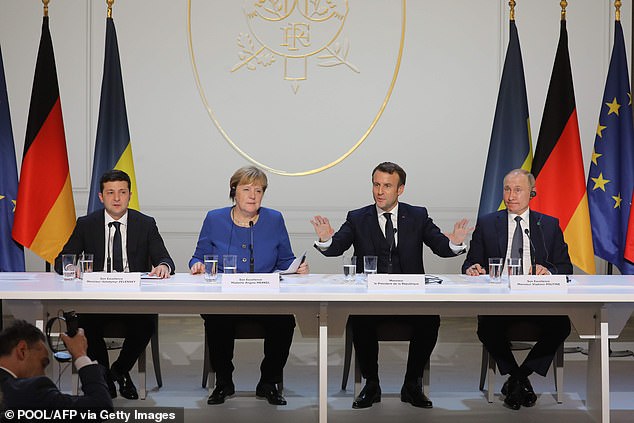 French president Macron has been trying to position himself as a negotiator between Russia and Ukraine, but Zelensky is far from convinced

And Zelensky is far from a lone voice: the Ukrainian ambassador to Britain revealed recently that his country’s troops have often shouted ‘God save the Queen’ as they fire the state-of-the-art anti-tank missiles that we have been supplying them throughout the conflict.

Sadly, the views of the ex-Finnish PM Stubb — shared, of course, by many EU panjandrums — are all too common. This sort of patronising, holier-than-thou, anti-British sentiment has become as depressing as it is familiar.

But how woefully misplaced it now seems!

Even the British government’s most fanatical critics grudgingly admit that it has led from the front on Ukraine.

If Boris Johnson takes heart from Zelensky’s tribute to this country, the preening, posturing President Macron should feel the sharp rebuke all the more keenly.

Since Brexit, the French leader has endlessly nurtured anti-British sentiment, painting this country as the pariah of Europe — to the extent of pouring scorn on British-made Covid vaccines, jeopardising the lives of his own people.

Yet now Zelensky, the leader of an embattled democracy, has singled out Britain — a renegade country whose people dared to vote to leave the bloated European superstate — as his most stolid supporter.

It is Britain, too, that has forcefully spearheaded global efforts to end Putin’s hideous war — leading the way on sanctions, weaponry, intelligence-gathering and more. 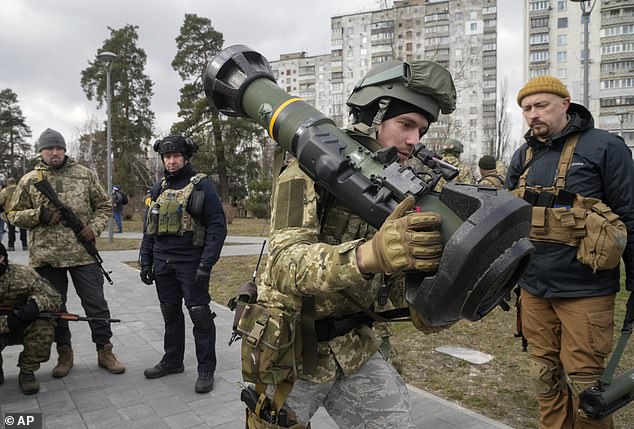 A Ukrainian Territorial Defence Forces member holds an NLAW anti-tank weapon, thousands of which were donated by the UK

And it is no exaggeration to say that without America’s Javelin missiles and Britain’s Light Anti-Tank Weapons Systems, Ukraine would likely have fallen to its aggressors by now.

What a blow it all is for Macron, who has been desperate to present himself as a colossus of the world stage — especially with elections next month — but who has proved hopelessly wrong-footed at almost every turn.

After all, it was the French President who in early February sallied into the Kremlin to conduct a five-hour meeting with the Russian despot at either end of a ludicrously long table.

Macron then briefed the Press about the ‘assurances’ Putin had offered him — even as 100,000 Russians troops had by then massed on Ukraine’s border.

‘He told me that he would not initiate an escalation, and I think this is important,’ Macron reported of his talks with the Kremlin gangster.

The parallels with Neville Chamberlain, returning from the Munich Conference in 1938, were agonisingly clear.

Putin launched his bloody invasion barely two weeks after his meeting with the French premier. 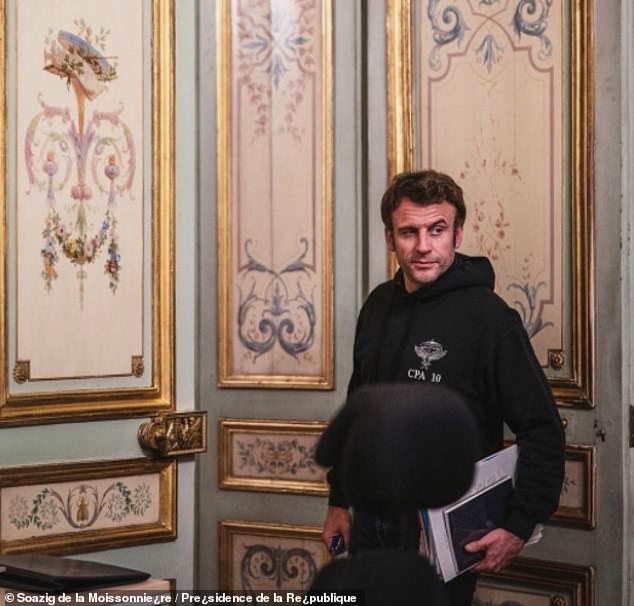 Unembarrassed, Macron — who usually favours expensive tailored suits — soon had himself photographed in the Elysee Palace to universal ridicule while sporting stubble, jeans and a hooded top bearing the logo of an elite French parachute regiment.

Critics said he was trying to ape the Ukrainian leader, who swapped sober suits for military-green T-shirts when the war began.

What a contrast Boris has been. When, late last year, Putin began assembling his forces on the Ukrainian border, Boris made his fears about a Russian attack explicit, declaring to the Commons in January that the Russian had made an ‘obvious threat to invade’.

Yes, Boris has made plenty of mistakes as a politician — and, perhaps, as a human being. But he is also an obsessive follower of Winston Churchill, who recognised in the 1930s the danger Hitler posed, even as many in Britain refused to.

I am not, of course, suggesting that Boris is Churchill’s equal. But I do recognise his ability — shared with his idol — to see a tyrant for what he is, or to use Zelensky’s words, to ‘recognise Nazism’.

The British Prime Minister has not been acting alone. Britain’s security services — perhaps scarred by intelligence failings over the Iraq War some 20 years ago — have also done superb work in exposing the danger Putin represented.

My contacts in Ukraine’s government have told me how deeply their relationship with British intelligence has strengthened in recent years.

The Salisbury poisonings, in which former Russian military officer Sergei Skripal and his daughter were attacked with the nerve agent Novichok on British soil, acted as a wake-up call four years ago.

Putin’s murderous tendencies have only worsened since then. Having destroyed swathes of Ukraine, now his forces are said to be seizing and deporting Ukrainians to ‘filtration camps’ deep inside Russia: gulags by another name.

This is no less than 21st-century Stalinism, and a monstrous disregard for international law.

Given all this — and with reports of more atrocities surely set to emerge — I have no doubt how history will judge this conflict and the Western politicians who were around at the time.

Who could now dispute that Macron the appeaser will be seen for the gullible minnow he was — while Boris’s stature has soared?

n David Patrikarakos is the author of War In 140 Characters: How Social Media Is Reshaping Conflict In The 21st Century.