Former Defence chief and governor-general Sir Peter Cosgrove says war between the United States and China has long been a possibility but the prospect is more concerning now because of the power and potency of Beijing’s military.

But he said Australia’s hardened rhetoric towards China would not lead to a war although the deteriorating relationship could continue to create commercial and social difficulties. 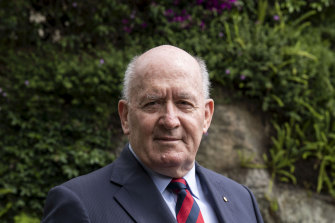 Former governor-general Peter Cosgrove says war between China and the US has always been a possibility.Credit:Dominic Lorrimer

Mr Cosgrove said China had changed over the past 20 years, modernising its defence force in a very powerful way.

“Things that the US were more relaxed about 20 years ago, they’re now on their toes because of the power that has been added to the People’s Liberation Army,” he told the Australian Institute of Superannuation Trustees conference, where he was speaking about leadership on Tuesday morning.

“It is now a very potent force and there’s this sense of it’s a historical time for China – South China Sea, Taiwan, Belt and Road … so we see the dragon awake.”

The federal government’s language about the prospect of war has hardened in recent months, with Defence Minister Peter Dutton saying a conflict over Taiwan could not be discounted and Home Affairs boss Michael Pezzullo warning the “drums of war” were beating. One of the nation’s top military commanders told his troops last year Beijing was already engaged in “grey zone” warfare against Australia and they must plan for the high likelihood this might spill over into actual conflict in future.

Diplomatic relations between Australia and China have hit their worst levels in decades, with Beijing imposing more than $20 billion of tariffs on Australian exports including beef, wine and barley.

But Sir Peter said the parlous state of Australia’s relationship with Beijing and tougher rhetoric would not be the cause of any war.

“Frankly, we’re not regarded as being of such a nature that China would go to a war,” he said. “They will possibly continue to create difficulties for us in a commercial area and social area but I doubt whether the hostilities will be at a heightened level of possibility because of our present estrangement from China.”

He noted war between the US and China over the latter’s ambition to “reunify” the self-governing, democratic island of Taiwan had been a “possibility for a long time”.

“China has said unequivocally over a long period of time that they regard Taiwan as being a part of China and there’s been very sensitive behaviour about that,” he said. “I suppose the Taiwanese are still operating carefully, but the evident rhetoric out of China is a bit more towards Taiwan than we’ve thought in the past.”

“I’ve said elsewhere that we ask the same troops to go back time after time; I think it’s very wearing on the troops. I think it erodes the boundaries of proper culture. I think it can lead to a sense of survivalist,” Sir Peter said, stressing he was not “leaning into an apology” for the behaviour.