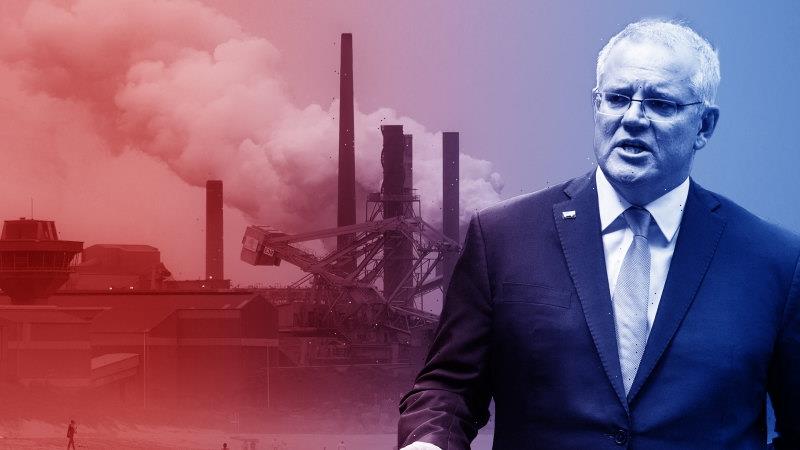 Most Australians want the federal government to cut greenhouse gas emissions to net zero by 2050 but do not want a carbon price as part of the plan, as Prime Minister Scott Morrison holds out against renewed global calls to set the target.

Coalition voters are among those who back the goal, with a slim majority of 52 per cent in favour and only 12 per cent against, despite the government’s internal fight over whether to do more to counter climate change.

But 61 per cent of voters want to meet the target using renewable energy and other technologies rather than putting a cost on emissions, suggesting Mr Morrison is tapping into community sentiment with his vow to use “technology not taxes” to reach the goal.

Mr Morrison emerged from the G7 summit of wealthy democracies on the weekend to insist Australia was moving towards net zero at some point, but Labor has accused him of being “isolated” on climate when other leaders are committed to the 2050 deadline or earlier goals.

The Australian support for greater ambition is revealed in a new survey that shows 55 per cent of all voters agree with the 2050 target, while 33 per cent are undecided and 12 per cent are opposed.

The exclusive survey, conducted for The Sydney Morning Herald and The Age by research company Resolve Strategic, shows the support is slightly stronger among Labor voters, with 59 per cent in favour and 9 per cent opposed. 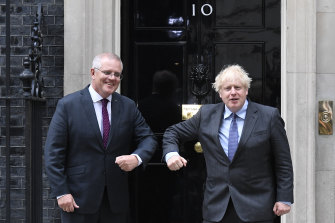 Prime Minister Scott Morrison’s push to “preferably” get to net zero emissions by 2050 is out of step with leaders like UK Prime Minister Boris Johnson.Credit:AP Photo/Alberto Pezzali

The gap between Coalition and Labor voters in the community is narrow compared to the policy gulf in Parliament, where Mr Morrison has attacked Labor leader Anthony Albanese for endorsing the 2050 deadline.

The Resolve Political Monitor was conducted from June 8 to 12 and asked 1600 voters about their views in online questions put in a random order to avoid a “donkey vote” with the results. It has a margin of error of 2.5 per cent.

Mr Morrison’s current stance is that the government would “preferably” achieve net zero by 2050 but he has avoided a hard deadline, although some Liberal MPs want the government to embrace the target before the United Nations climate summit in Glasgow in November.

“We all understand the importance of a net zero, carbon neutral economy. That’s all we want to get to,” Mr Morrison said on Tuesday.

Australia is out of step with other advanced economies given the G7 leaders committed last weekend to net zero “by 2050 at the latest” as well as more ambitious targets for 2030.

While Mr Morrison stands by the Abbott government’s pledge to cut emissions by 26 to 28 per cent by 2030 compared to 2005 levels, United States President Joe Biden wants a cut of 50 to 52 per cent in the same period while British Prime Minister Boris Johnson has set a target of 78 per cent by 2035 compared to 1990 levels.

“The vast majority of Australians either support a 2050 net zero emissions target or are unfazed by it, so its adoption would not be controversial out in the electorate,” said Resolve director Jim Reed.

“But there is also sympathy for reaching our 2030 goals as a priority, and strong support for doing so via new technologies rather than taxes. The government isn’t leading public opinion here, but is reflecting it.”

One question in the Resolve Political Monitor canvassed the choice between a cost or a tax on emissions as opposed to adopting new technologies, asking: “while both these methods can be used, which is your preferred method for Australia to reduce its carbon emissions?”

On this question, 61 per cent favoured new technologies, 26 per cent were undecided and only 13 per cent backed a cost on emissions.

The claim that technology alone can reduce emissions is fiercely contested, with Grattan Institute energy program director Tony Wood saying it would be “messier and more expensive” to reach the target without a price on carbon.

Mr Wood said the best approach would be technology as well as a market mechanism rather than one or the other.

“Is the government prepared to pay for it all out of the budget? It would be very expensive and would not be the best way,” he said. 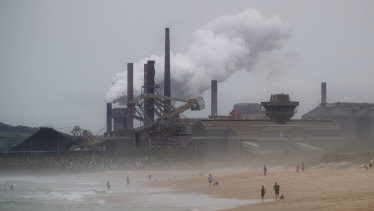 The steelworks and coal loading facility at Port Kembla.Credit:Getty Images

A Nielsen poll in The Sydney Morning Herald and The Age shortly before the Senate vote in November 2009 found 66 per cent of voters supported an emissions trading scheme.

“Most Australians do want action taken on climate change, but putting a price on carbon is inevitably seen to flow down to the consumer,” Mr Reed said.

“Instead, they see the progress being made in electric vehicles, home solar and batteries, and consider that encouraging those technologies can actually make a real difference.”

Mr Morrison is not alone in disavowing a carbon price, with Labor leader Anthony Albanese also arguing that a price on emissions is not needed to achieve results.

Asked in June last year if a Labor government would put a price on carbon, Mr Albanese replied: “No, we’re not because it’s not necessary.”

He told the ABC’s 7:30 program that a price on carbon was not needed when wind and solar power had become so cheap they undercut fossil fuels.

Labor has committed to net zero by 2050 but is debating whether to set a new target for 2030 or 2035. The Greens want Australia to be net zero by 2035 with a “strong, effective price on carbon” to help achieve that outcome.