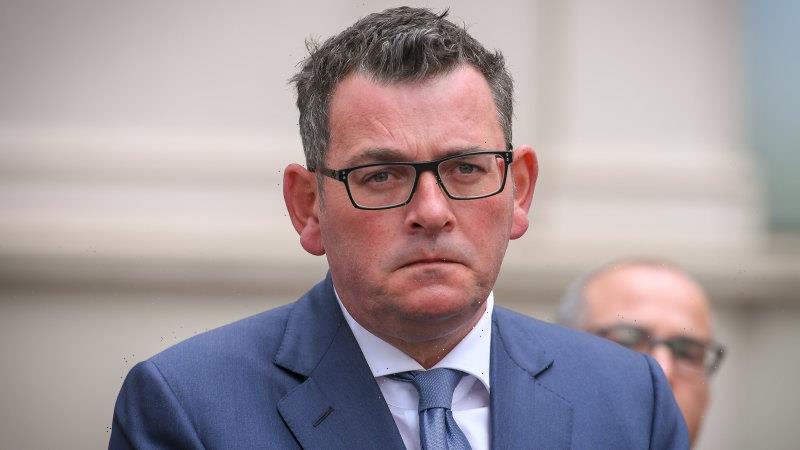 The Andrews government’s handling of the coronavirus pandemic has cost it the support of thousands of Victorian voters but Daniel Andrews remains comfortably ahead of his rival as the state’s preferred premier.

The findings are contained in a new survey by Resolve Political Monitor, conducted exclusively for The Age and The Sydney Morning Herald, which reveals the state government’s primary vote has dropped six percentage points since the November 2018 poll. 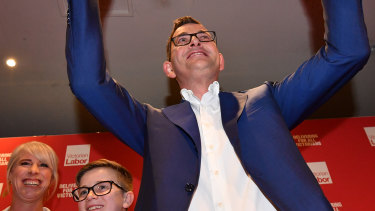 The Premier celebrates victory after his re-election.Credit:Joe Armao

While the government slipped from 43 to 37 per cent, leaving it only one percentage point ahead of the Coalition, the opposition failed to capitalise on the fall.

The swing away from Labor has instead delivered gains to independent candidates, with the opposition improving its primary vote by only 1 per cent, from 35 to 36 per cent, since the 2018 state election and less than 18 months out from the next poll scheduled for November 26.

Resolve Strategic director Jim Reed said Victoria was the only state where support for the incumbent government had slipped during the pandemic, challenging the accepted wisdom that this COVID-19 crisis favours incumbency.

“We have seen swings to popular incumbents in other states during COVID, such as NSW, WA and Queensland but unusually this research is showing a primary vote swing against the Andrews government and a reduction in preferences flowing to them,” Mr Reed said.

Victorians, who have endured more time in lockdown and hundreds more deaths from COVID-19 than any other state, received news from acting Premier James Merlino on Wednesday that curbs on movement, gatherings and mask-wearing would be relaxed as the state emerges from its fourth lockdown since the start of the coronavirus pandemic.

The survey found 46 per cent of Victorian respondents support the Andrews government handling of the latest coronavirus outbreaks but voters remain split on whether or not the state was adequately prepared for it and continue to question the need for state-wide lockdowns.

Older males, those aged over 55, and regional Victorians showed the greatest support for the Coalition while Labor remains popular among younger voters, particularly women in suburban seats.

The survey shows months of lockdowns have made the Premier a divisive figure in Victoria, with Mr Andrews recording a net “likeability” rating of plus 10 per cent, with 42 per cent of voters expressing a positive view of him, compared with 32 per cent feeling negatively towards him. 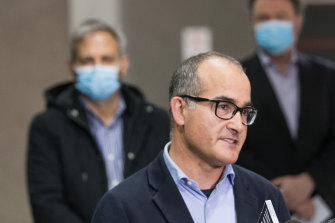 By comparison, NSW Premier Gladys Berejiklian last month recorded a likeability score of plus 33 points, with 50 per cent of NSW voters holding a positive view of their premier compared with 17 per cent feeling negatively towards her.

Mr Merlino, who has been acting Premier since March while Mr Andrews recovers from a back injury, also out-polled his boss with a likeability score of plus 15 per cent.

On Sunday, Mr Merlino welcomed the news that Mr Andrews had been given the all-clear by doctors to return to work on June 28, insisting he is not interested in the top job.

"I will happily hand him back the keys," he said.

Only 14 per cent of voters expressed a positive view of Opposition Leader Michael O’Brien, with 22 per cent feeling negatively towards him, resulting in a likeability score of minus 8.

As part of its research, Resolve Strategic also probes the reasons behind voting intentions. The results reveal a deep divide over the government's pandemic response with those backing Labor reporting a high level of trust in the government and a belief that the government had little choice in locking down the state.

Victorians who oppose the government questioned why Victorians have faced more lockdowns than the rest of Australia and questioned whether the restrictions were fair on small businesses.

Despite the split, Mr Andrews remains the preferred Premier with 49 per cent of voters, compared with just 23 per cent who believe Michael O’Brien would do a better job. More than one quarter of respondents – 27 per cent – remain undecided. 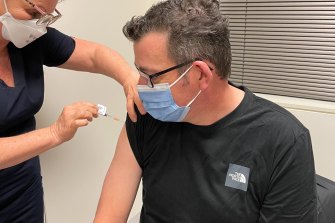 Premier Daniel Andrews is due back to work soon.Credit:Office of the Premier

Senior politics lecturer at Monash University, Dr Zareh Ghazarian said the survey showed Mr Andrews still enjoyed voters’ goodwill but it was clear the lockdowns and restrictions have “taken a toll and are eating away at the government’s support”.

“During last year’s lockdown people saw Dan every morning and that gave them a clear sense of whether they did like him and supported him, or they didn’t,” he said.

“He clearly has pockets of really strong support, but those who have been negatively impacted by the lockdown simply don’t like him.”

While Dr Ghazarian downplayed the low personal support for Liberal leader Michael O’Brien as preferred premier, he said the poll showed worrying signs for the Coalition which had failed to improve its vote despite a slip in support for Labor.

“To some extent you would expect Labor’s vote to come down given it’s a second term government chasing a third term,” Dr Ghazarian said.

“People who are thinking about changing their vote at the next election aren't going to the Coalition and that is a problematic sign.”

He said while the Coalition doesn’t appear to be in an “election winning position”, the Liberal and National parties haven’t lost support.

“The silver lining is that the Coalition is holding on to its core base, including rural electorates and older voters.”

While Labor has attempted to blame the latest lockdown on the federal government’s slow vaccine rollout, the survey found 63 per cent of Victorians felt the state government should have been better prepared for the latest outbreak. And almost half of those polled – 46 per cent – believe Victoria was too quick to lockdown large parts of the state following the latest outbreak of COVID-19.

Victorians were also lukewarm on the state government’s latest budget with one in four voters believing the measures, which including billions for mental health funded by a big business tax, would be bad for the State as a whole. Only 28 per cent of Victorians believe the budget will leave them better off.

The survey asked 1103 Victorian voters about their views on the government, premier and opposition as well as economic policies and the pandemic response.

In October, towards the end of the second wave, an Ipsos poll commissioned by The Age and Nine News found 52 per cent of Victorians surveyed approved of the way Mr Andrews had performed his role, with 33 per cent disapproving.