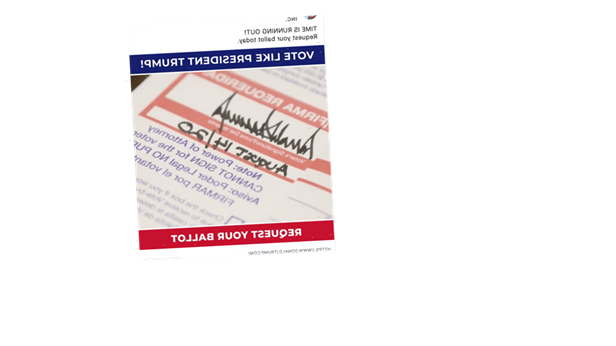 President Trump’s campaign has launched a social media ad blitz aimed at encouraging supporters to vote by mail, a move that follows months of Mr. Trump’s open attempts to discredit the practice and tie it to election fraud.

One ad has the headline “VOTE LIKE PRESIDENT TRUMP!” and includes the text, “TIME IS RUNNING OUT! Request your ballot today.” The image shows a close-up of an absentee ballot. The ad, a reference to the absentee ballot the president sent for this year’s Florida Republican primary, is appearing on Facebook in Florida and North Carolina. 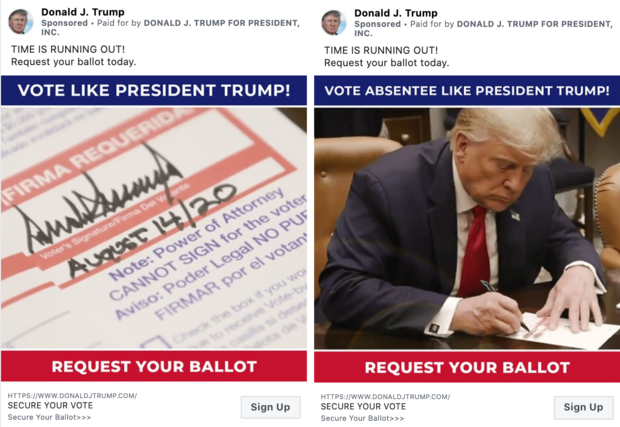 Another ad includes the text “GET YOUR ABSENTEE BALLOT APPLICATION TODAY. We need to vote to SAVE our country. Absentee ballots are GOOD. I need you to get your application and send in your absentee ballot IMMEDIATELY.” This one had the potential to reach one million people in Wisconsin, according to data made available on the Facebook Ad Library, which catalogues paid advertisements on the social network. 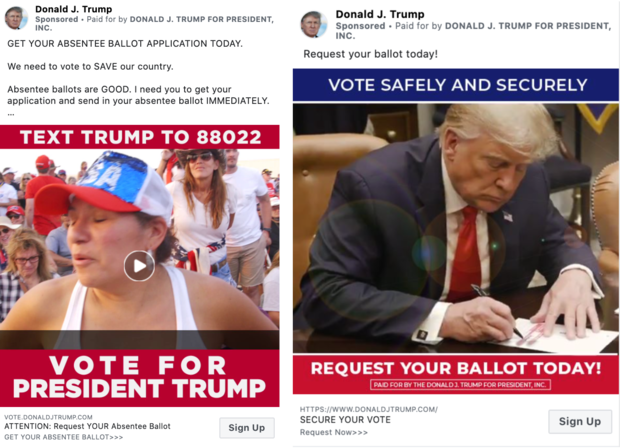 The campaign spent at least $2.5 million on the twelve ads that had the broadest reach, according to Facebook data, targeting at least 11 million voters. Other Facebook ads from Mr. Trump’s campaign about getting an absentee ballot have also targeted Arizona, Iowa, Michigan, Florida, Georgia and Pennsylvania. The states represent a cross-section of so-called battlegrounds that the president won in 2016, but where recent polls have either shown a tight race or the president trailing.

The president has for months said without evidence that voting by mail could be tied to widespread fraud and abuse.

On June 22, Mr. Trump tweeted, “Rigged 2020 election: millions of mail-in ballots will be printed by foreign countries, and others. It will be the scandal of our times!” Ten days later, he tweeted about the issue again, this time writing, “Mail-In Ballots will lead to massive electoral fraud and a rigged 2020 Election.”

In recent weeks, he has taken a different tone.

“Absentee ballots are absolutely fine. You request them, you fill them in, you send them back in,” the president said in an October Fox News interview. He said in the interview that his problem was with “unsolicited” ballots.

Campaigns need to push voters to register and vote as early as possible, no matter what the candidate might say, according to Daniel Kreiss, a University of North Carolina Chapel Hill associate professor whose research looks at digital media, data and analytics in contemporary campaigning.

“Look, that’s a good campaign doing what it’s supposed to do, getting people to vote. They want people to be out there and doing this independent of what the president is saying on the podium,” said Kreiss.

Kreiss said campaigns also use voter registration drives to collect data that ultimately can boost votes among their supporters, by helping the campaigns determine who might need an extra push to vote.

Palm Beach County election records showed that the president and first lady Melania Trump were mailed ballots at the Mar-a-Lago resort for the Florida August primary. It was not until around that time in early August that the president started claiming voting by mail specifically in Florida was safe.

After his rally on Monday, the president tweeted, “FLORIDA! Send in your absentee ballot if you have requested one.”

Palm Beach County election records do not currently show absentee ballot requests for the 2020 general election on file for the president and first lady. The deadline to request a vote-by-mail ballot in Palm Beach County is Oct. 24

Trump campaign spokesperson Thea McDonald said in an email that President Trump has “rightly and consistently said that when a voter cannot make it to the polls, they should request an absentee ballot, just as he himself has done.”

“President Trump and his team are working diligently to ensure voters know how their state’s voting system works so they can cast their ballot with confidence it will count,” said McDonald, who also accused Democrats of scaring voters away from casting ballots in-person.

The Trump campaign vote-by-mail ads come as Democrats see a massive advantage in absentee ballot requests across several key battleground states with just under 20 days to go before Election Day.

In Florida, where the Trump campaign has placed Facebook ads targeting more voters than in any other state, more than two million people had already voted by mail as of October 15. That includes more than one million Democrats and more than 623,000 Republicans, according to Florida Division of Elections data. Another 1.5 million Democrats have requested vote-by-mail ballots but have not yet returned them compared to 1.1 million Republicans.

In North Carolina, more than 533,000 ballots have already been cast — more than 50% by Democrats and only 18% by Republicans. At the same time, over 1.3 million voters have requested their absentee ballots, according to the State Board of Elections. Of that, 46.7% of requests came from registered Democrats. Just 19% of requests have come from Republicans.

And Pennsylvania Department of State data shows more than 2.6 million mail ballots have been requested. Of those requests, 65% have come from Democrats and 24% have come from Republicans.

A CBS News Battleground Tracker poll from September found 34% of likely voters would prefer to cast ballots by mail or absentee, 37% said they prefer to vote in person on Election Day, and 29% indicated they prefer in-person early voting.