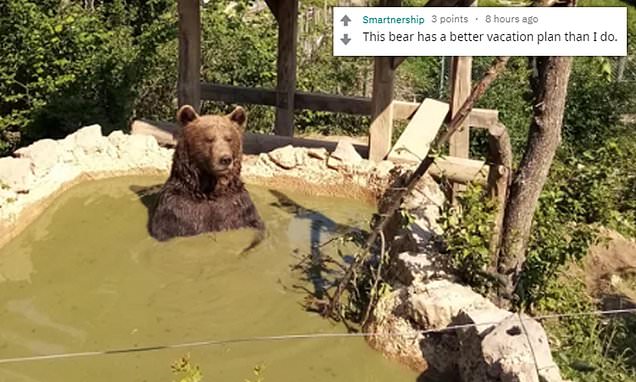 Social media users were left in hysterics after a snap of a very solemn bear relaxing in a mud bath at an animal refuge was posted online.

The photograph, posted to Reddit, captures Vladimir the rescue Brown bear as he lies under a wooden hut in a white stone bath in Croatia.

Vladimir, who is one of ten bears at the Kuterevo refuge, looks into the distance in the snap – half of his body disappearing as he submerges himself in the muddy water.

Sharing the image, the volunteer wrote: ‘Hey! I’m volunteering in a bear refuge in Croatia and I thought like sharing this photo of a chillaxing lad with you guys (sic)’, with followers joking that he had a ‘better vacation plan than they did’. 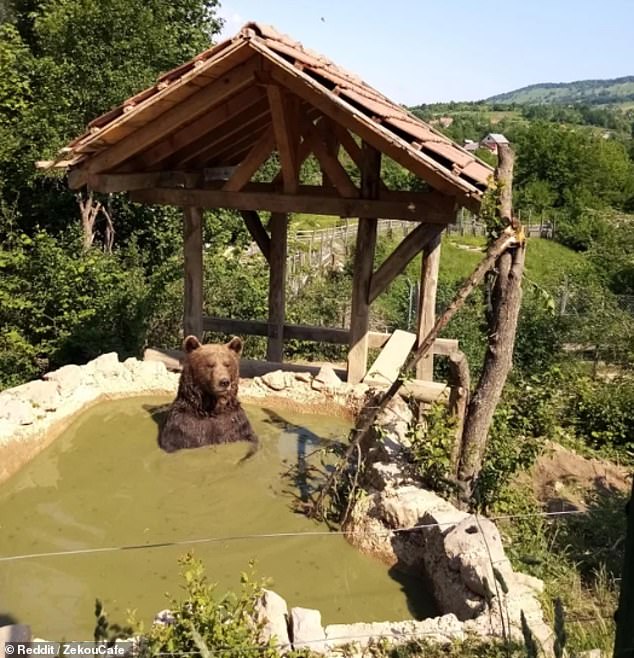 Hundreds of Redditors were quick to share their appreciation for the ‘adorable’ photograph, with one claiming Vladimir looks as if he was ‘contemplating life’.

The user wrote: ‘He’s so solemn, it looks like he’s contemplating all of his life decisions’.

Another commented: ‘He is beautiful! Please tell him that I love him and hope he is happy’.

And a third said: ‘That’s the look I have on my face when I’m pondering life choices’.

Hundreds of Redditors were quick to share their appreciation for the ‘adorable’ photograph, with one claiming he looks as if he is ‘contemplating his life decisions’

Another Redditor said the snap looked like something ‘from a children’s book’, while others shared an abundance of bear-related puns.

‘This is amazing. Like a scene from a children’s book’, said one.

A second commented: ‘It looks like a photo from a BearBNB listing’.

‘He looks like he’s on a proper spa day. This is unbearably adorable’, added another.

Another Redditor said the snap looked like something ‘from a children’s book’, while others shared an abundance of puns

Other Redditors asked the volunteer how they could visit the sanctuary and see Vladimir in the flesh.

‘Is this refuge a place the public can go to and see them chilling? I’m visiting Croatia next year and am trying to compile a list of things to do while there’, one asked.

Another asked: ‘There’s a bear refuge in Croatia? What part? Is it something I can come visit when I’m back in the area??’

The excited volunteer confirmed that the refuge, in the Velebit Mountain, is free to enter and funded solely through donations.