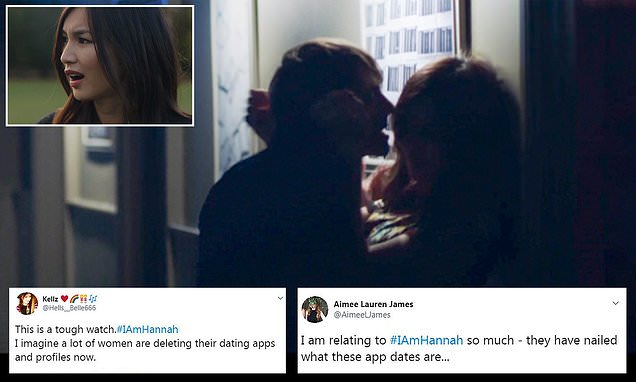 Viewers slammed online dating last night after watching the ‘scarily accurate’ Channel 4 drama I Am Hannah, in which the lead character was forcibly pinned to a wall and kissed by a stranger she met on an app.

The episode followed single thirty-something Hannah, who went on a series of first dates with abrasive men she’d met online who repeatedly asked what she was ‘looking for’.

In one scene, Hannah was told she was ‘a f******* joke’ by a man she’s just met, while in another, a man forcibly kissed her, pining her hands to a wall with Hannah having to physically push him off before running away.

The episode struck a note with viewers, with many taking to Twitter to call the portrayal of online dating ‘relatable’. 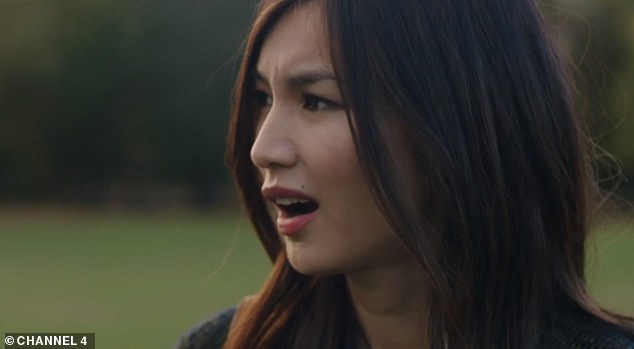 In one scene, Hannah was left stunned by the man’s abrasive rant, which left her standing alone in a park just five minutes after they’d met

One wrote: ‘This is a tough watch #IAmHannah. I imagine a lot of women are deleting their dating apps and profiles now.’

While another commented: ‘I am relating to #IAmHannah so much, they’ve nailed what these app dates are…’

Many said they could relate to the portrayal of online dating in the programme, which is the final episode in three part drama series.

They watched as the lead character Hannah, played by Gemma Chan, went on a series of unsuccessful dates with increasingly unattractive and aggressive men, while facing pressure from her mother to ‘settle down’. 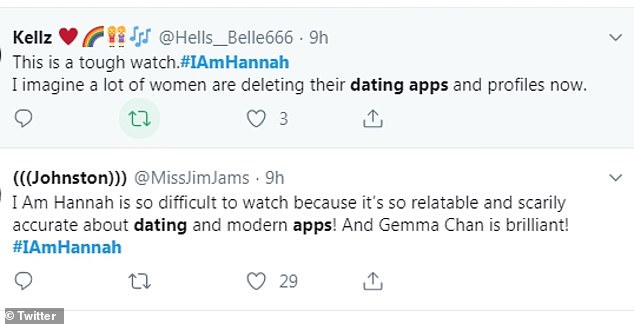 Viewers were struck by the scenes, with one saying the scenes were ‘scarily accurate’ and ‘so relatable’

Thirty-something Hannah was repeatedly asked by the men why she was on dating apps, and what she was looking for.

On one date, a man boasted about ‘completing’ the dating app scene, before going on to complain about women lying on their dating profiles.

Shortly after meeting Hannah for the first time, he told her: ‘Sometimes people look nothing like their picture – and this is going to sound bad, but this girl turned up and she had two extra chins.

He went on to demand to know why Hannah was using the apps, saying: ‘You’re not looking for anything specific? Some people go on it for a shag, and some people are on it for other things.’ 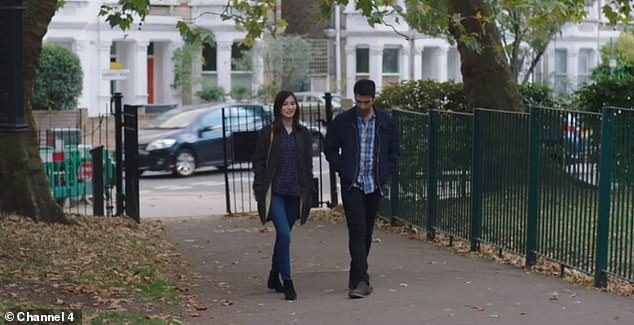 Hannah went on one date with a seemingly charming man in a park, who quickly asked her what she was looking for

Meanwhile an uncertain Hannah explained: ‘Thought about it, still thinking about it. I just don’t know exactly what it is that I want yet.’

But the unnamed man quickly turned aggressively, ranting at Hannah: ‘So why are you on a date? When you say “see what happens”, do you mean actually see what happens?

‘I know what I want out of this, to be honest. If I meet someone I’m thinking, “what is this, and what can this be?”.

The date went on to complain that women lied on dating apps, before questioning Hannah on what she was looking for

‘I just waste a lot of time, I’ve been on a lot of these dates, and I feel like someone is not ready or just come out of a relationship.’

He continued: ‘I need people to be a lot more honest. I know that can be abrasive for some people.’

And while a shocked Hannah was left open mouthed, he finished: ‘I think we should just leave it here yeah. F*****g joke. Thanks for wasting my f*****g time. ‘

Hannah was left standing alone muttering ‘Wow’ as the man walked off, leaving her stunned.

And her bad luck with men continued as she went on another date with a man in a bar, who was quick to ask her: ‘So tell me what’s Hannah looking for? What are you after?’

Clearly remembering the aggressive rant from the man days earlier, Hannah explained that she wanted  to have the freedom to be herself.

She said: ‘We like the idea of safety and comfort and care and someone to feel like home, but there’s another side of us that wants novelty and excitement and the new.

And in another scene that struck viewers, a man asked Hannah what she was looking for shortly after meeting in a bar

‘And I don’t know how you resolve that with just one person. I know that I don’t want to be tied down, I know that I want excitement, I like sex.’

But as the conversation became stilted, Hannah dashed to the toilet, only to be confronted by the man on her walk back through a dark corridor.

After lurking in the shadows, the man appeared from nowhere, pushing Hannah up against a wall and forcibly kissing her.

As the man pinned her arms above her head, he repeatedly muttered the phrases: ‘You want to be free don’t you’, ‘I know what you want’, and ‘Come on’.

Clearly remembering the reaction she’d had days earlier, Hannah went on to say that she was looking for someone she could be herself with

But Hannah was left begging him: ‘Hey slow down’ and ‘lets go upstairs’, before using her full weight to push him backwards, and running away.

Many viewers were struck by the scenes, and took to Twitter to say that it had also been their experience of the online dating world.

‘I Am Hannah so difficult to watch because it’s so relatable and scarily accurate about dating and modern apps,’ one commented, adding, ‘And Gemma Chan is brilliant.’

One wrote: ‘Okay I’m already relating to Hannah on the ****** swipe right dates.’

Another commented: ‘Love those dating app dates, with an angry person, who takes out all frustration about previous dates on you #Loon.’ 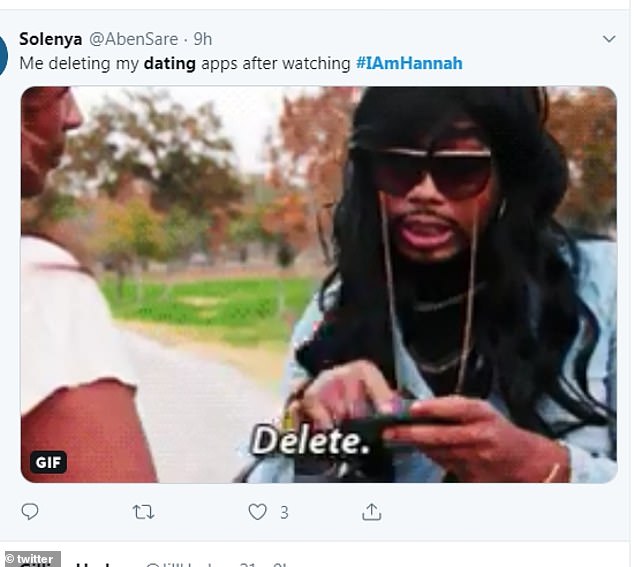 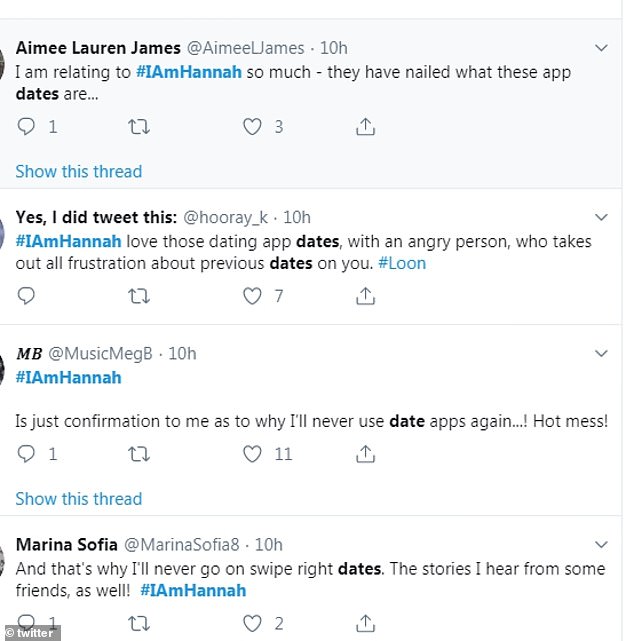 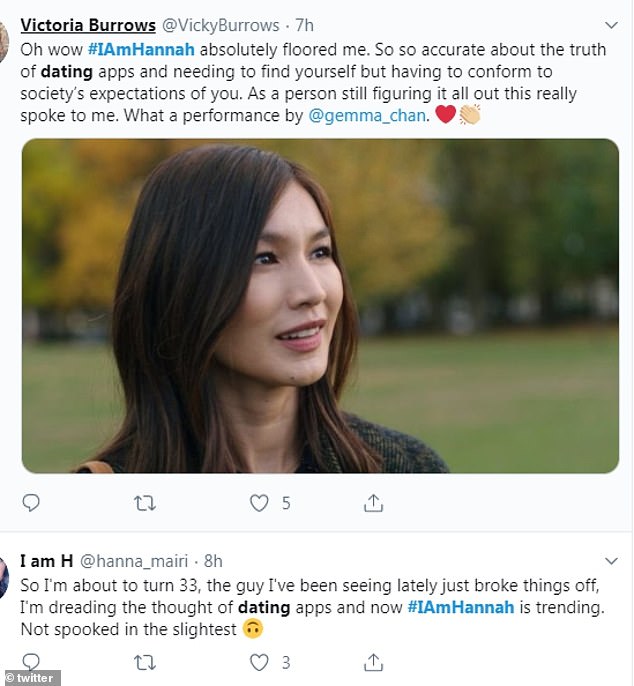 Many viewers were struck by the scenes, with some saying they could relate to the online dating world, and others saying it had put them off