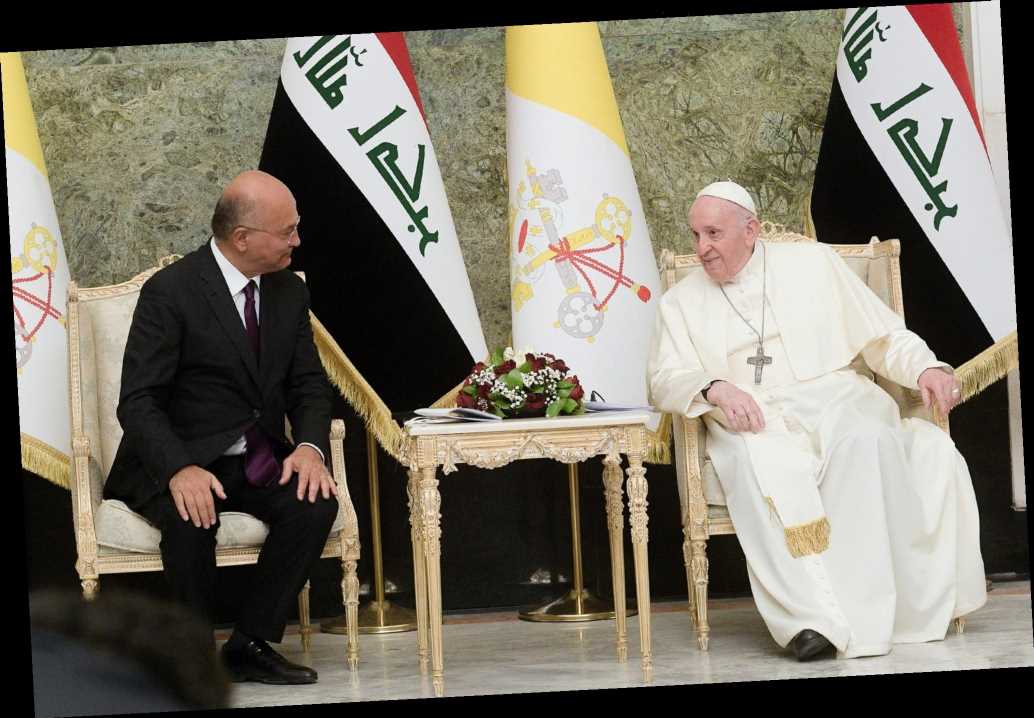 Pope Francis has made history by becoming the first-ever pontiff to visit Iraq — a trip he took despite security concerns and the ongoing COVID-19 pandemic.

The head of the Catholic Church, 84, touched down in Baghdad on Friday to mark his 33rd international "Apostolic Journey" visit, as reported by the Vatican. He is set to spend four days in the Middle Eastern country, which he will travel throughout as "a pilgrim seeking peace, fraternity and reconciliation."

In his first speech during his visit, Pope Francis touched on several topics, including the pandemic, war, recovery and solidarity, saying at one point, "We never emerge from a crisis the same as we were; we emerge from it either better or worse."

An Iraq joint operations spokesperson, Tahsin al-Khafaji, said that Pope Francis' "really important" visit "provides a good perspective of Iraq because the whole world will be watching," according to NBC News.

Chaldean patriarch Cardinal Luis Sako told reporters in Baghdad this week, NBC News further reported, that Pope Francis coming to Iraq "is to support the Christians in Iraq to stay, and to say that they are not forgotten."

The visit comes weeks after the Vatican announced in mid-January that Pope Francis received his COVID-19 vaccine. The papal visit comes after recent unrest in Iraq. On Wednesday, 10 rockets were fired at a military base in the nation that was hosting thousands of U.S. troops, U.S. officials said. The attack came days after a U.S. airstrike in Syria killed one fighter and wounded two in an Iranian-backed militia, the Pentagon said, per NBC News.

No U.S. service members were injured in the attack, but a U.S. civilian contractor died from a cardiac episode amid the chaos, Pentagon Press Secretary John F. Kirby said in a statement at the time.

The attack was the first known military action under President Joe Biden, and one of the two militia groups affected defended its retaliation against such "barbaric aggression," CNN reported.

"[It] indicates without any doubt that the aggressive American policies towards our peoples do not change by changing their administration as the deceived hope, and that its ugly face cannot be hidden by the change of masks," the group reportedly said in a statement. "We affirm the legitimate right of our Iraqi people to respond to this cowardly criminal operation, in revenge for our martyrs." In response to the pandemic, Pope Francis wrote a book to help people navigate adversity, Let Us Dream: The Path to a Better Future, in which he reveals that he suffered from a near-death experience as a young man.

In the book, released late last year, he writes of knowing what it's like to "struggle to breathe" after almost dying of the flu at age 21: "I had my first experience of limit, of pain and loneliness. … It changed the way I saw life. For months, I didn't know who I was, and whether I would live or die. The doctors had no idea whether I'd make it either."

Pope Francis explains in the book that he was was in his second year of training for the priesthood at a seminary in Buenos Aires when he was rushed to the hospital.

"I remember the date: August 13, 1957. I got taken to hospital by a prefect who realized mine was not the kind of flu you treat with aspirin," he writes. "Straightaway they took a liter and a half of water out of the lung, and I remained there fighting for my life."

As information about the coronavirus pandemic rapidly changes, PEOPLE is committed to providing the most recent data in our coverage. Some of the information in this story may have changed after publication. For the latest on COVID-19, readers are encouraged to use online resources from CDC, WHO, and local public health departments. PEOPLE has partnered with GoFundMe to raise money for the COVID-19 Relief Fund, a GoFundMe.org fundraiser to support everything from frontline responders to families in need, as well as organizations helping communities. For more information or to donate, click here.