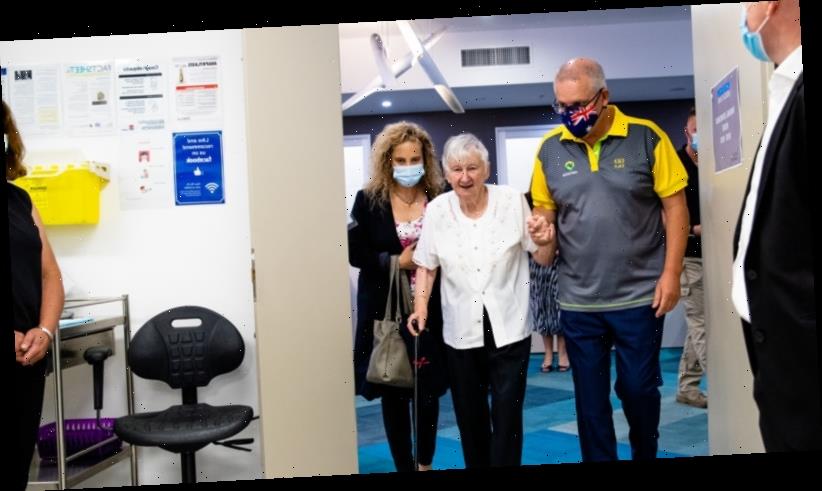 GP clinics and states that are hitting vaccination targets and using up supplies will be restocked with coronavirus vaccine vials ahead of those that fall behind in an effort to speed up the process.

Prime Minister Scott Morrison said on Sunday after getting his second jab at Castle Hill Medical Centre in north-west Sydney that he had discussed with NSW Premier Gladys Berejiklian how her state had the capacity to deliver more vaccine doses. 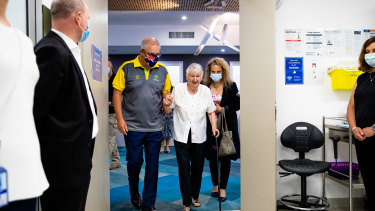 Prime Minister Scott Morrison accompanies Jane Malaysiak, the first person to get the coronavirus vaccine in Australia, to get her second dose.Credit:Edwina Pickles

“With the GP rollout, you know, we’ll be sending doses to those who can get through them, those who are actually meeting the targets and ensuring the doses are administered,” Mr Morrison said.

“Now where there is spare capacity in states, well we will send doses there too on a dynamic basis to ensure that we are keeping pace, but it’s not a race, it’s not a competition, it’s about the health and safety of Australians.”

Data released by the Health Department on Sunday shows 159,294 people in Australia had received the vaccine by March 12, with 36,820 in NSW, 30,298 in Victoria, 18,411 in Queensland, 17,692 in Western Australia and much smaller numbers in the other states. The Commonwealth delivered 38,934 to aged care residents and people with a disability.

The figures are well short of the four-million target the federal government had hoped to reach by early April. The government has blamed the shortfall on problems with overseas supplies of vaccines.

Asked about figures suggesting Queensland had only used about 30 per cent of the vaccine stocks it was allocated, Mr Morrison branded fears states would not use all their allocated doses “premature” and said he had faith in the rollout.

“I’m confident that the states and territories will meet their marks, that they’ll do the best possible job they can,” he said.

A presentation by the Health Department secretary Brendan Murphy forecast all eligible Australians would get their first vaccine by October, with some receiving a second dose after that.

Karen Price, the president of the Royal Australian College of General Practitioners, said the pace a GP could deliver vaccines depended on the size of their practice and the availability of trained staff.

GPs were doing their best to meet community expectations and deliver vaccines as efficiently as possible, Dr Price said. “We certainly need co-operation coming back towards us from the government in terms of understanding the business environment in multiple different contexts,” she said.

The government has also committed another $1.1 billion to extend a set of coronavirus-related healthcare measures, including splitting the cost of testing and treating COVID-19 in public hospitals 50-50 with the states.

And it unveiled a new website called “Is it true?” to counter coronavirus misinformation.

Among the questions on the site are whether the vaccine contains tracking microchips, an internet connection, or will it render Australians infertile.

The website provides an answer to each that is, in short, “no”.

Catch all the day’s headlines

At the end of each day, we’ll send you the most important breaking news headlines, evening entertainment ideas and a long read to enjoy.  Sign up to The Sydney Morning Herald’s newsletter here, The Age’s here, Brisbane Times’ here, and WAtoday’s here.