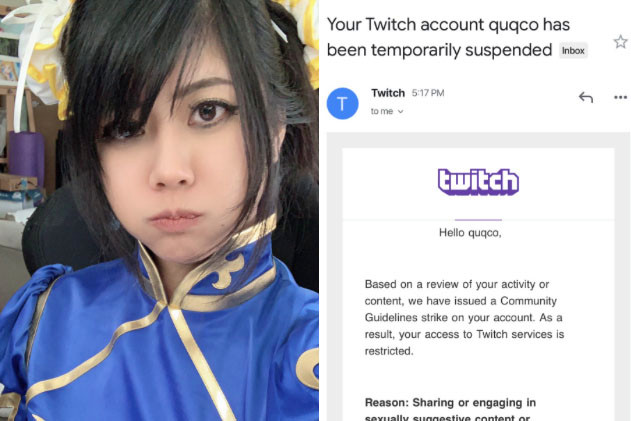 Her thigh-high slits got her suspended.

Small-time Twitch streamer Quqco was banned from the platform on Sunday after being reported for “Sharing or engaging in sexually suggestive content.”

“How is this sexually suggestive content?” the art streamer — who paints watercolors and draws live on the platform — tweeted Sunday with a photo of herself cosplaying as Chun-Li, the first female fighter from the video game “Street Fighter” whose outfit consists of a blue qipao dress and yellow bun covers. “[There] was no sexual intent nor content,” she tweets, while also sharing the drawings and paintings she’d done during the session.

She’s now trying to overturn the three-day ban, which she feels wasn’t justified.

“The slit of this dress is cut lower than some runner shorts I own,” she tells gaming news site Kotaku, “I actually bought one size up to ensure that the slit wasn’t too high.”

This wasn’t Quqco’s first run-in with Twitch’s notoriously vague guidelines regarding what is or is not sexually explicit.

In August, a cosplay of the “Dead or Alive” character Mai Shiranui also got Quqco temporarily banned after she bent over to reach for something, flashing her underwear to viewers in the process, Dexerto reports.

Quqco believes she’s being targeted and “branded a thot” by trolls who are “mass reporting” her, she tells Kotaku, noting that unlike some female streamers, she doesn’t suggestively dance or do squats while streaming.

Gamer culture is notoriously sexist and toxic for women, who routinely report cyberbullying. In 2015, an online movement called Gamergate descended into death threats against female game developers and journalists.

Female cosplayers have also complained about Comic-Con creeps who inundate them with unwanted advances.