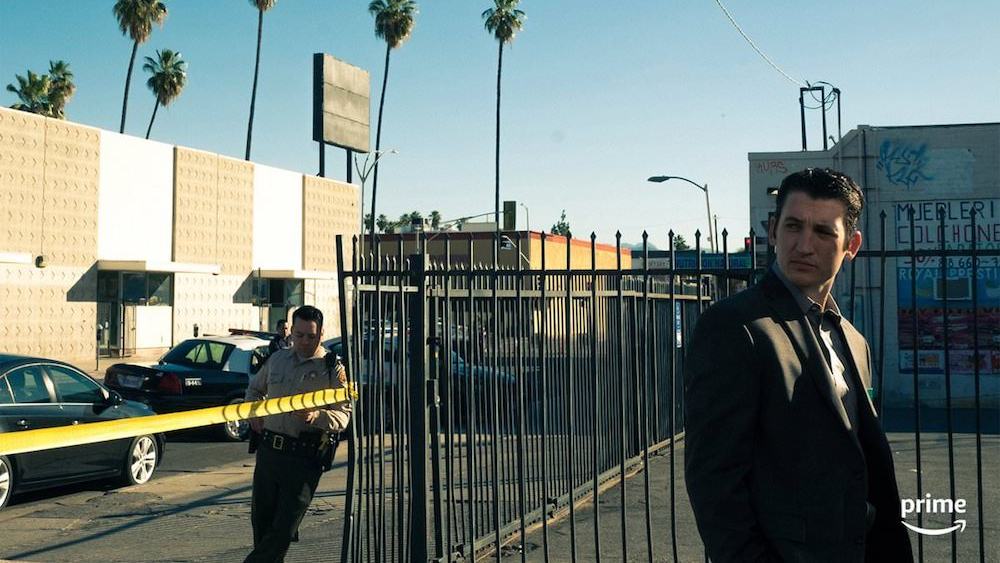 Danish auteur Nicolas Winding Refn brings his set of interests to the small screen with “Too Old to Die Young,” a ten-episode drama that has kicked up a minor-key storm over whether it is indeed a television series or, as Refn calls it, a very long, serialized movie. Some of the data points involved in the debate: Episodes four and five, which were, oddly, the only ones made available to critics stateside, were screened at the Cannes Film Festival; the episodes are unusually long, with installment five clocking in at 75 minutes; it streams on Amazon, which supports both media. While this debate can and will be litigated further by those it interests (not I — it’s constructed in discrete episodes, and is thus television, full stop), the question of why the debate is happening is yet more clear-cut. It’s the only way to squeeze anything savory out of this lemon of a product. Show, movie, whichever: I’ll cede the point if I have to just to avoid thinking or talking about the content of “Too Old to Die Young” longer than strictly necessary.

The series follows Martin Jones (Miles Teller, a gifted film actor with some bad luck finding roles in recent years) as a detective-turned-vigilante-killer who lives in a post-moral universe in Los Angeles, spending days grimacing through the world of the living and carrying out brutal revenge killings during off hours. Teller’s nonreactive performance is the sort onto which it’s long been easy for viewers generally inclined towards a given director’s particular aesthetic to graft insight and shrewd intelligence; indeed, aesthetic is all “Too Old to Die Young” has to boast. A scene, say, in which police officers cheer and shout “Fascism!” with glee before watching their chief perform a song about Jesus on the ukulele could, generously, be seen as attempting a statement of sort about the venality and credulity of those entrusted with power in our society, if it weren’t tangled up in a series that has already proven itself addicted to generating images, often of extreme violence, whose meaninglessness is the point.

It’s hard to imagine that having been served the first three episodes would have resolved my distaste for this extended bit of exposure to Refn, a filmmaker whose work has historically left me cold. But they might, maybe, have generated a bit more context for Martin and his situation. As things stood, jumping in around the series’s midpoint, his decisions and relationships seemed random, emphasizing the degree to which the show’s bits of mythologizing and its gratuitousness spring from the clear blue sky. The fifth episode, for instance, begins with a revolting bit of abuse and assault against a young man, walked up to languorously as the nature of what is about to occur is made sickeningly clear. This, perhaps, can be said to justify Martin’s deranged quest to wipe out wrongdoers, just as does, later, the image of a trembling woman emerging from a shallowly dug grave in the middle of the desert. But it’s also shoving cruelty in our faces for the sake of doing so.

None of this is new for Refn. With films like “Drive” and “The Neon Demon,” he juxtaposed Grand Guignol bloodshed, difficult to endure, with blandly austere emotional reactions from his characters. That “Drive,” released in 2011 and marketed as a potential blockbuster, spurred a frivolous lawsuit from a moviegoer who alleged, among other charges, that there wasn’t enough driving in it, is emblematic. Refn, working with tropes and tonalities borrowed from acknowledged greats Quentin Tarantino and David Lynch, wants to turn the pleasures of genre inside out, doing so with a laboriousness and a cruelty so intense as to quite purposefully alienate the casual audience member. Merging the ultraviolence of Tarantino with the chilliness of Lynch — and borrowing both directors’ fascination with American culture of yesteryear and the dark urges that underpin it — Refn makes films, and now has made a television show, whose dual focus is inhuman brutality and post-human, robotic sangfroid in the face of it. While no viewer in an era when practically nothing is off-limits can truly be surprised at the nature of a show’s content, the degree to which it’s deployed to say nothing but itself, over and over again, here, feels disappointing for Amazon if not for Refn. One more way this is like a movie and not a television show — Refn gets away with endless, cycling viciousness towards his characters and his audience in a way a rising showrunner would not. His Cannes-prizewinner aura lends Amazon the air of a player on the global film market, even when this is both beneath Refn’s usual filmmaking standard and an intensification of careerlong concerns that will likely (hopefully?) play well on home entertainment systems for only an infinitesimally small segment of the worldwide audience.

That Martin’s adversaries, in “Too Old to Die Young,” are pornographers who make work that trades on horrific moments of abuse and exploitation doesn’t land for two reasons: One is that, within a landscape quite as airless as this one, with endless extended shots and silent reactions and nameless, floating figures of evil, attempts at tension too easily end up at overextension. The other is that, in trading on the worst moments of life in order to find some erotic charge, those characters are doing something different in degree but not in intent from “Too Old to Die Young” itself.