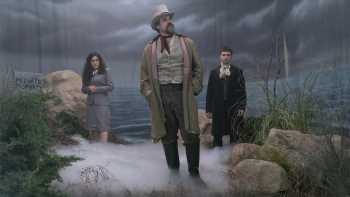 One thing the new mockumentary “Frankenstein’s Monster’s Monster, Frankenstein” does quite well is prove that there are perks to appearing on a streaming service’s signature hit.

David Harbour, the stolid and familiar presence from Netflix’s “Stranger Things,” is given the opportunity to cut loose here with a broad, loopy half-hour that feels a bit like one long comedy sketch, with all that implies. He’s evidently having a great deal of fun playing his fictional late father, a pompous theater actor who acted in his own play about Dr. Frankenstein and recorded the piece for posterity. But even half an hour is a generous amount of time to give to a story that feels, well, sketchy, with reversals whose pile-up is more novel than truly funny and with jokes that feel underwritten at best.

Harbour also plays himself in the present day, working to uncover more information about his father and his theater career, a question that’s neither funny nor revealing. His putative father’s theater isn’t bad in an interesting or funny way; it’s just increasingly dull, wasting the great comic talent Kate Berlant at that. (Berlant recently appeared in Netflix’s “I Think You Should Leave,” a superlative variety series from which this program might have learned something about restraint; the sketches were tight and brisk and the episodes a mere 15 minutes apiece.) And the introduction of theater jokes about, say, the principle of Chekhov’s gun, come to rankle: If writer John Levenstein is so willing to show off what he knows about the principles of theater, why does so little of this work as anything other than the broadest sort of slapstick? Ultimately, the presence of quite so many preeningly presented references to theater and to Harbour’s fictional family history with so few genuine laughs makes the whole enterprise feel indulgent, a vanity project for one of Netflix’s biggest stars and not one that demands in any real way to exist.

This is a missed opportunity for Harbour, who, after the most recent season of “Stranger Things,” could use a win. His turn in the most recent season turned, quickly, from sweetly paternal if flawed to fairly menacing, as he put his power as a law-enforcement officer and as the series’s most imposing adult male character to work in overzealously protecting Eleven (Millie Bobby Brown) and forcing a relationship with Joyce (Winona Ryder); it was the dischordant note in an otherwise successful season, and fell well short of cute or likable, traits that Harbour’s Jim Hopper has historically evidenced.

“Frankenstein’s Monster’s Monster, Frankenstein” might have been an opportunity for Harbour to show off the warmth and wit viewers know he possesses. But mired in strange, deadening anti-comedy and ticking by the minutes slowly, Harbour has proven, for now, only his ambition to try different sorts of acting. His deadpan, here, doesn’t connect as particularly funny, and the project as a whole likely play to all but diehards as a footnote on the “Stranger Things” reign.