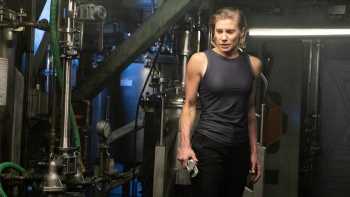 Netflix’s new series “Another Life” brings Katee Sackhoff back into space, a decade after the conclusion of “Battlestar Galactica,” the beloved series on which she starred. But her new series looks more like the rest of the fare on the SyFy network — it’s inelegantly made and operates less in the realm of ideas than in pure scares. It’s not ineffective, but little in “Another Life” connects to do much more than the purely visceral.

Which is too bad, not least because the show starts from a point that suggests it has big things on its mind. The arrival (to borrow the title of the 2016 film the plot seems to ape a bit) of a UFO hovering above Earth prompts Sackhoff, an astronaut, to join a mission seeking its origin and its motives. She’s faced first with a mutinous blowhard among her crew (played by the ever-appealing Tyler Hoechlin, who’s given too few notes to play) and then by a creeping space illness that causes one unfortunate astronaut’s nervous system to explode out of her body. It’s compellingly gross.

And that’s about all it is. Sackhoff’s yearning for her family back on earth — evoked through dream sequences and through cuts to their own experiences — doesn’t really land. Though she tries her best, we don’t get to know her as anything other than biographical details: Astronaut, wife, mother. It’s as if the show itself is nervous that making us feel for these characters in a real way is going to mute our identification with the body horror they endure — when, in fact, it’d have the opposite effect.

It’s worth noting briefly that a bright spot in the show is Selma Blair, the actress who’s been recently open about her struggle with multiple sclerosis and who appears as a batty and conspiratorial journalist seeking the truth about the aliens. It’s a deeply silly role that Blair puts her all into, and one that engenders the series’s only real bits of world-building, as the show attempts to convey what life in a future with aliens and deep-space travel might really be like. It’s an aspect of this show that, as is all too rare here, viewers will feel like they haven’t seen before.