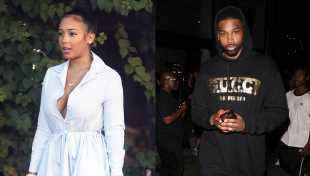 Tristan Thompson was ordered to pay Jordan Craig $40,000 a month in child support after his ex-girlfriend argued that her child should enjoy the same lavish lifestyle as True Thompson.

Tristan Thompson, 28, was ordered by a judge to pay $40,000 a month to his ex, Jordan Craig, 27, in child support payments for their 2-year-old son, Prince on May 14. Jordan argued that she deserved more money based on the lavish lifestyle Tristan’s other child, True Thompson, lived. But California family attorney, David T. Pisarra EXCLUSIVELY explained to HollywoodLife that the basis for Jordan’s request may have had no effect on the judge’s final ruling. “You can make all types of arguments in family law to try to get more money. That’s an argument, but I don’t know if the judge bought that argument,” Pisarra explained. “She can argue whatever she wants but we don’t know if that had any effect on the final ruling by the judge.”

“The argument for a large child support payment is that the child should have the same lifestyle experiences in both households so that one isn’t preferred over the other. It is designed to be an equalizing factor,” Pisarra said. As for what Tristan and his lawyers might have argued to fight Jordan’s request Pisarra explained, “Tristan’s lawyer was probably, or should have been, arguing that a lot of True’s lifestyle is dependent on her mom, Khloe Kardashian, and that he shouldn’t have to be responsible for that.

“A judge will take a look at Tristan’s income and say that Tristan has a lot of money, he should be able to afford something and if he’s participating in those expensive dinners and trips, he’s benefitting from having a rich girlfriend, and that he shouldn’t be held solely accountable for True’s lavish lifestyle,” Pisarra added.

The Instagram model and the NBA star initially and informally agreed on $15,000 a month in child support payments. But she revealed in a Jan. 31 deposition that Tristan should have been paying more based on his $16.4 million Cleveland Cavaliers annual salary. “Forty thousand each month is a huge amount of money, but it’s not as big as he could have gotten hit with based off his income,” Pisarra said despite the $200,000 Tristan was also ordered to pay in back child support.

“Forty thousand is probably less than a guideline amount because he qualifies as a high income earner. Tristan’s income will get plugged into a program called the DissoMaster. The DissoMaster looks at a number of factors including income, the number of children, health insurance, property taxes, etc. and it spits out a number. However, a judge can sway from that number and decide what he thinks is fair,” Pisarra explained.

One way Jordan may have showed a judge “proof” of the extravagant lifestyle True lives is via social media.  “Photos on Instagram could be enough to show a judge as proof that Tristan is giving one child a more lavish lifestyle over another child,” Pisarra continued. “We could look at the lifestyle Tristan is giving True based on press releases, Instagram photos, Facebook postings, or any other social media outlet. They could definitely take those into account when it comes to the ‘burden of proof.’

“For example, Jordan could show an Instagram picture of Tristan out to dinner with True at Nobu and say, ‘Look this could be a $500 dinner.’ Jordan’s lawyers could also look to see if Tristan is flying by private jet, is he staying at the Ritz Carlton or is he staying at the Motel 6?” Pisarra noted. “It’s all of the lifestyle choices made that Jordan’s lawyers could have some type of third party proof on, meaning either a social media photo or a media report. Even if Tristan is in the news and there are reports that he had, for example, a $30 thousand dollar party for True, etc. Jordan could argue, ‘Well, why doesn’t our child have a $30 thousand dollar party?’ These are all arguments Jordan and her lawyers could make,” Pisarra added.

Ultimately a judge has the final say regardless of what Jordan and her lawyers argue. “A judge really has great latitude when it comes to what he rules for each child. A judge could say that both children do deserve to have the same lifestyle and same privileges, or a judge could say that the kids are different ages and have different experiences and only grant Jordan $40 thousand a month,” Pisarra said. “For example, a judge may feel that Jordan’s child may not need to fly on private jets the same way Khloe’s daughter may need to because of her family’s specific lifestyle.”

It’s unknown if Khloe and Tristan, who split in February after the Jordyn Woods cheating scandal, have any child support or custody arrangements in place, but the basketball player has not been photographed recently with either of his children. And while Jordan claimed that Tristan had seen his son nine times from the time he was born until Nov. 2018, the father-of-two said he was unsure if that number was accurate, according to Radar Online.