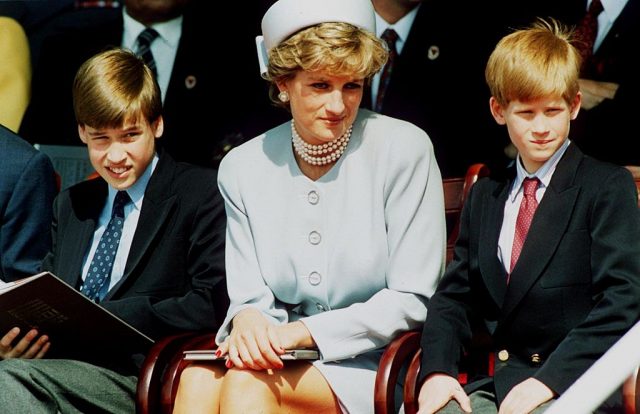 Traits of Princess Diana’s live on in her sons, Prince William, Duke of Cambridge, and Prince Harry, Duke of Sussex, friends close to the late royal say.

Those who knew Princess Diana along with Prince William and Prince Harry spoke about the People’s Princess in the 2016 documentary, Diana, Our Mother: Her Life and Legacy. Learn which traits Princess Diana passed on to her children ahead.

Elton John, who knew Princess Diana very well, discussed his late friend and how her legacy has continued since her death on August 31, 1997.

The music legend met with Prince Harry and others at The London Lighthouse to discuss what Princess Diana did to help those with AIDS by supporting the charity publicly. They added the royal would often show up unannounced on her own time to visit with patients.

“She had this incredible ability, which he [Prince Harry] kind of inherited and I told him that,” John said to a smiling Prince Harry while they looked through photographs of Princess Diana at The London Lighthouse, “to make people feel at ease and make them feel that everything’s going be all right.”

“I haven’t experienced many people in my life who have that ability, but she could walk into a room of people and make them feel as if everything was great,” he added.

Prince Harry on missing his mother

Also in the documentary, Prince Harry talked about childhood memories of his mother involving sneaking sweets at soccer games and the one thing that comes to his mind when people ask him about her.

He talked about missing his mother, whom he lost at age 12, saying he missed her hugs.

“Even talking about it now I can feel the hugs she used to give us and you know I miss that, I miss that feeling, I miss that part of a family, I miss having that mother to be able give you that hug and that compassion that everybody needs,” Prince Harry said.

As for Prince William, who lost his mother at the age of 15, he has inherited another one of Princess Diana’s gifts.

Julia Samuel the founder of the bereavement charity, Child Bereavement UK, spoke about her late friend in the documentary and noted that she sees Princess Diana in Prince William.

“She had a very natural gift of empathy. Just by looking at someone she’d have an idea of what they were feeling and actually I see that in the Duke of Cambridge,” Samuel said. “He has a depth of understanding through his own experience that connects with other people.”

Mark Smith, a volunteer at The Passage, a London homeless shelter Prince William first visited with his mother at the age of 12, pointed out a similarity between Prince William and Princess Diana in the documentary when the Duke of Cambridge made a visit to the shelter.

“He’s not afraid to get his hands dirty, which is like his mother,” Smith said.

Whether a volunteer, a close friend or an admirer, it’s not hard to see pieces of Princess Diana in her sons.

“When you see the boys […] for me, that brings her back. It makes me smile,” Harry Herbert said in the documentary. “You turn on the telly [TV] and see that Harry’s been a bit wicked doing something, that’s great because that’s Diana. You see William’s smile, you see the way that they react to people and that’s their mother.”