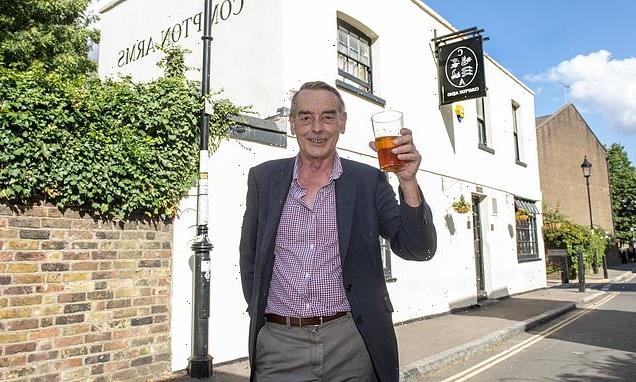 TOM UTLEY: A visit to the boozer said to have inspired Orwell’s perfect pub made me want to drown my sorrows

The part of North London in which I was born has shot up in the world since I drew my first breath, and raised my first wail, in my parents’ bedroom on the last Sunday in November, 1953.

In those days, our end of Canonbury — in my book, the prettiest slice of Islington — was predominantly working class and a bit run down.

There was a bomb site over the road from our semi — the result, I suspect, of the same stick of German bombs that had killed 26 people and injured more than 150 at Highbury Corner, a couple of hundred yards away, in 1944.

But the long process of gentrification by the professional classes was already well underway by 1951, when my parents moved in. Our neighbours included academics, novelists, employees of the British Museum and the BBC, lawyers starting out again after being demobbed and journalists like my father.

They had been drawn to the area by its low house prices, its proximity to the centre of town and the beauty of its elegant Georgian squares and early-Victorian, semi-detached villas like ours in Canonbury Park South.

Now, among these incoming journalists was the genius George Orwell, one of the greatest practitioners of my trade, who moved during the war into 27b Canonbury Square, just round the corner from our house. 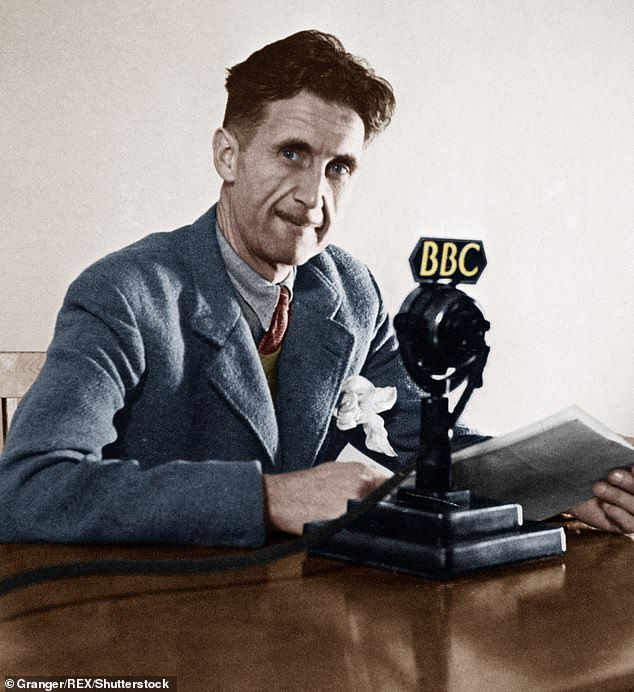 Now, among these incoming journalists was the genius George Orwell, one of the greatest practitioners of my trade, who moved during the war into 27b Canonbury Square, just round the corner from our house

It was while he was living there that he wrote his brilliant 1946 essay Politics And The English Language, which I have always recommended to young people seeking guidance on how to write clear and simple English.

Indeed, when I rule the world, this short masterpiece will be compulsory reading for every Parliamentary candidate, and everyone else who uses pretentious abstract nouns, not to elucidate ideas but to mask an inability to think.

It’s another of Orwell’s essays, however, that concerns me this week. Written that same year, this was the famous article he wrote for the capital’s Evening Standard newspaper, in which he set out his vision of the perfect London pub, which he called the Moon Under Water.

Imagine how my interest was piqued when I read on Wednesday that what claimed to be Orwell’s ‘favourite pub’, and the model for the Moon Under Water, was threatened with closure because four neighbours had labelled the Compton Arms a public nuisance and a danger to health.

Apparently, the complainants were particularly concerned about the noise — especially on Saturday nights, when Arsenal fans gathered at the pub to watch the match — and about rubbish on the pavement outside.

The campaign to save the Compton Arms, I thought, was a cause that united three of my greatest enthusiasms in life — George Orwell’s journalism, my love of that finest of British institutions, the pub, and my abiding affection for the village-within-a-city in which I was born. 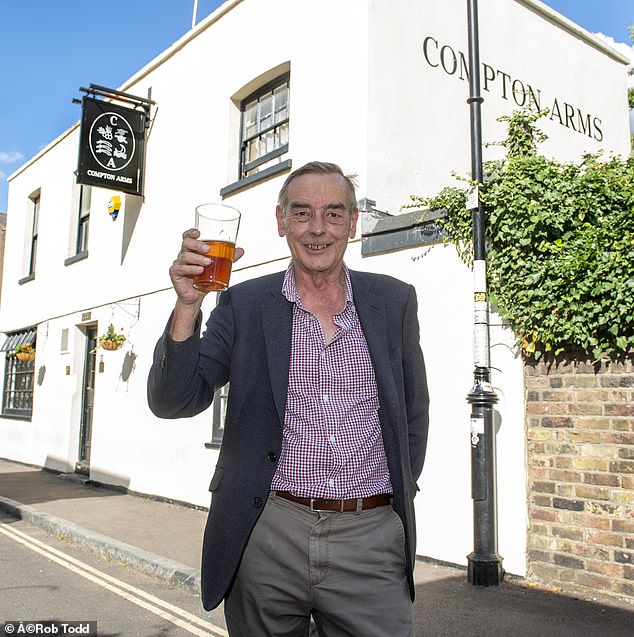 Imagine how my interest was piqued when I read on Wednesday that what claimed to be Orwell’s ‘favourite pub’, and the model for the Moon Under Water, was threatened with closure because four neighbours had labelled the Compton Arms a public nuisance and a danger to health

Here, I thought, was a depressing story of our times: a tale of zillionaire incomers intent upon sucking the heart out of a community — and committing literary sacrilege into the bargain — simply to spare themselves mild inconvenience from time to time.

(To give you some idea of how Canonbury prices have soared, my parents sold our house in the late 1950s for something less than £5,000. When I checked that same house on the Zoopla website this week, it was valued at a cool £3.2 million.)

Orwell’s adopted son, 78-year-old Richard Blair, had thrown his weight behind saving the pub — though he was only three when his father left Canonbury, and I can’t help wondering if he has ever set foot in the Compton Arms.

Whatever the truth, Mr Blair intervened at the 11th hour, before Tuesday’s closure of a public consultation, declaring that as one of his father’s locals, the pub may indeed have been one of the inspirations for the Moon Under Water.

No sooner had I read the story than I determined to do everything in my power to aid the cause. I made straight for the Tube from our South London suburb (how the Utleys have come down in the world!) to revisit my now-swanky birthplace and get the low-down from the bar staff on how I could help.

Oh, dear: I have to report that I was bitterly disappointed. No sooner had I crossed the threshold of the Compton Arms than I realised that, in its present form at least, it bears almost no discernible resemblance to Orwell’s Moon Under Water.

True, it’s in a quiet side street, and within a couple of minutes’ walk from a bus stop — two of the great man’s requirements for his dream London pub. It’s also perfectly plausible that Orwell may have dropped in for a pint and a bite now and then. But when you’ve said that, you’ve said all.

For a start, the Moon Under Water was clearly quite a big pub, with three bars (saloon, public and ladies’), a large garden, including a children’s play area, ‘plenty of elbow room’ and ‘uncompromisingly Victorian fittings’.

As Orwell wrote in his article for the Evening Standard: ‘The grained woodwork, the ornamental mirrors behind the bar, the cast-iron fireplaces, the florid ceiling stained dark yellow by tobacco smoke, the stuffed bull’s head over the mantelpiece — everything has the solid, comfortable ugliness of the 19th century.’

The Compton Arms, by contrast, is decidedly on the small side, with only one bar, a tiny paved patio that serves as a garden, no fireplaces that I could see, no ornamental mirrors — and certainly no stuffed bull’s head.

Yes, the building itself is pretty, and I would guess from the look of it that it dates from the mid-19th century. 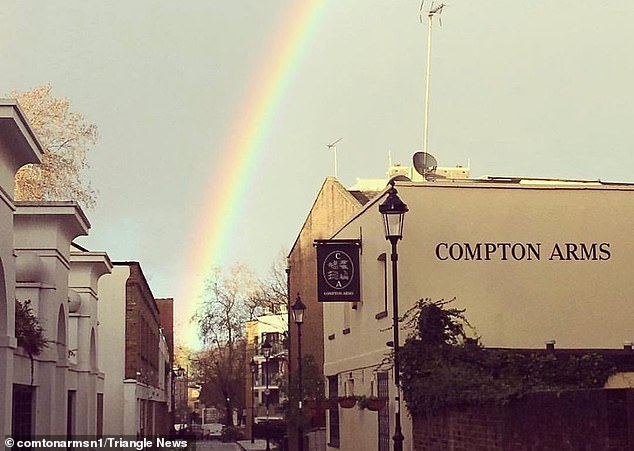 No sooner had I crossed the threshold of the Compton Arms than I realised that, in its present form at least, it bears almost no discernible resemblance to Orwell’s Moon Under Water

But the interior décor, with its stripped pine floorboards, clean white walls and modern-looking bar smacks to me more of Habitat and the 1970s than the ‘comfortable ugliness of the 19th century’.

There’s much else about the pub, as it is now, which I’m sure would have appalled Orwell.

OK, I can well understand and forgive its failure to sell ‘liver-sausage sandwiches’, tobacco, aspirins and stamps — all of which were on offer at the Moon Under Water.

But Orwell makes a particular point of saying that his dream pub has no piano or radio to interfere with conversation. The Compton Arms, on the other hand, has annoying piped music and a wide-screen telly (which is now switched off on match days, to appease the complaining neighbours).

Orwell would surely have been bewildered, too, by the sign over the bar saying ‘WE ARE CARD ONLY’ — and I dare say he would have fainted at the item on the drinks menu: ‘Tripoz Cremant Bourgogne, £50.’

I can’t help noting, too, that my hero wrote in the very first sentence of the Moon Under Water that ‘drunks and rowdies never seem to find their way there, even on Saturday nights’. I wonder how that squares with the complaints against the Compton Arms. 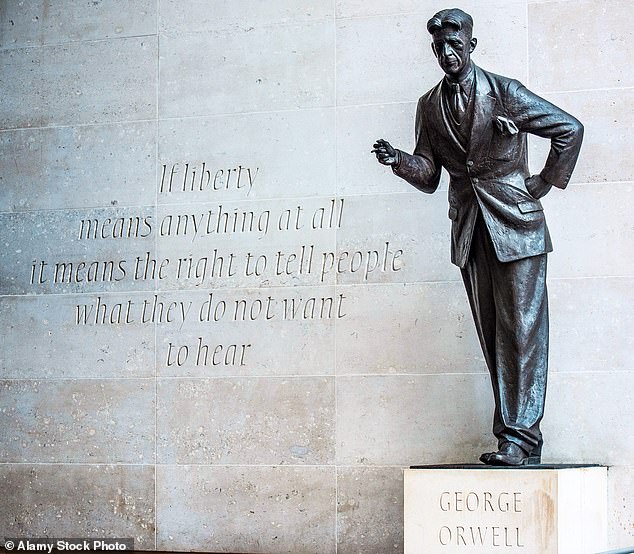 But if you’re a pub-loving Orwell fan, like me, and feel tempted to make a pilgrimage to this supposed model for the Moon Under Water, I strongly advise you not to bother

To be fair, the pub may have been very different in Orwell’s day. Perhaps it had a larger garden, too, before some rich neighbour bought a chunk of it. All these things I would love to have been able to tell you, after questioning the bar staff.

But my worst frustration of all, during my mission to save the pub, was that they told me they had strict instructions not to talk to the Press or to co-operate with us in any way. So your guess is as good as mine.

For what it’s worth, I still hope that the local council will look kindly on the Compton Arms and renew its licence, perhaps with a stern warning to keep those Arsenal fans in order, or else.

Indeed, it grieves me when any long-established pub has to close, as so many do in these grim times.

But if you’re a pub-loving Orwell fan, like me, and feel tempted to make a pilgrimage to this supposed model for the Moon Under Water, I strongly advise you not to bother. Off the top of my head, I can think of at least a dozen pubs in London that fit Orwell’s description far better.