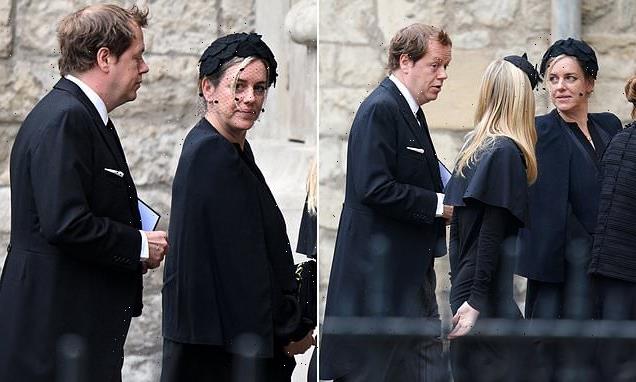 In support of the Queen Consort: Camilla’s two children, Tom Parker Bowles, 47, and Laura Lopes, 44, arrive together at Westminster Abbey ahead of the Queen’s funeral

The Queen Consort’s children, Tom Parker Bowles and Laura Lopes, were among early mourners to arrive at Westminster Abbey this morning ahead of the Queen’s funeral.

The siblings arrived together at Westminster Abbey to mourn the Queen and see their mother, the new Queen Consort, take her place alongside King Charles III.

Mother-of-three Laura Lopes, 44, wore a feathered black headpiece with netted veil, and was joined by her three children, Eliza, Gus and Louis, and husband Harry Lopes, a scion of the super-wealthy Astor family. 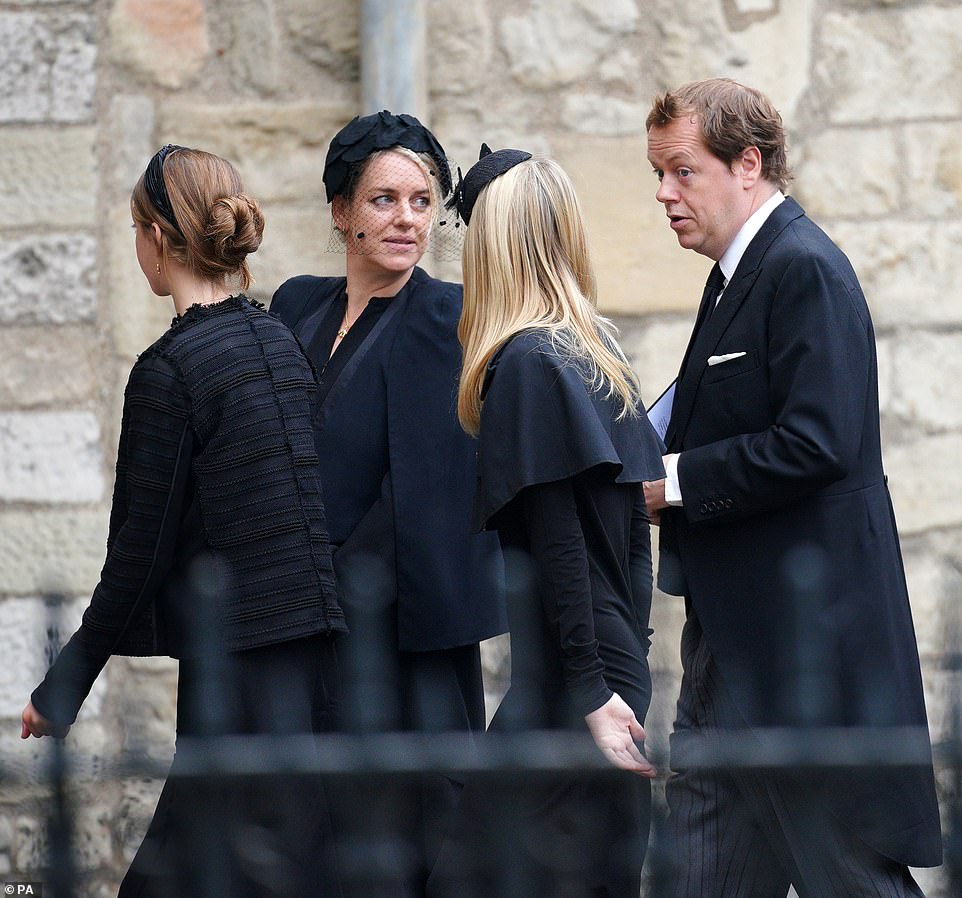 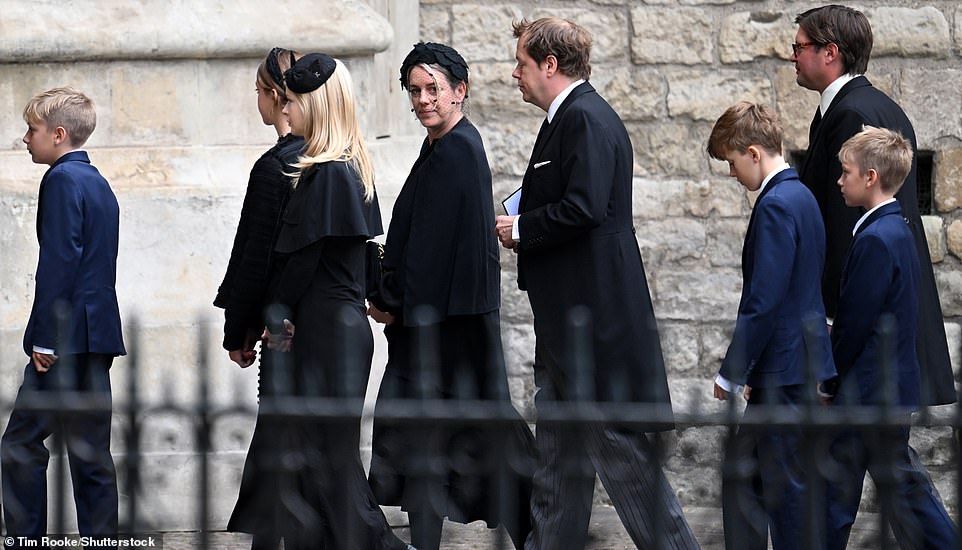 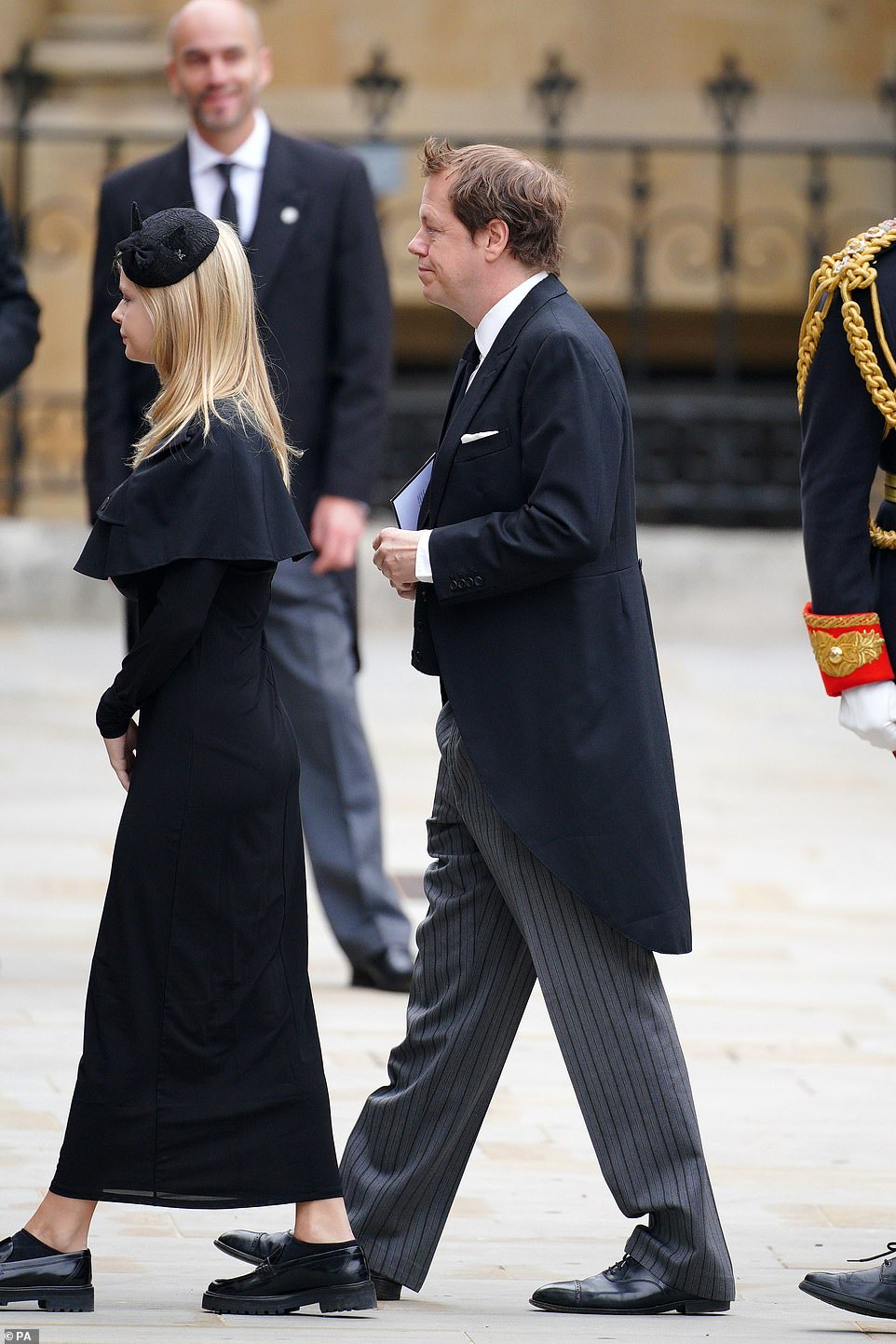 The Queen consort’s son, food critic Tom Parker Bowles, 47, wore a traditional mourning suit as he joined his sister’s family for the funeral.

The two siblings have long been supportive of their mother’s relationship with the King and enjoy close relations with the royal family. Laura’s daughter Eliza was a flower girl to William and Kate when they wed in 2011.

Carole and Mike, who are known to be close to the Princess of Wales, opted for smart black mourning dress and appeared deep in thought as they arrived for the event in London today.

It is not known how many times Carole and Michael met the Queen, although they often attended family events, such as the christenings of Prince George and Princess Charlotte, with one another. 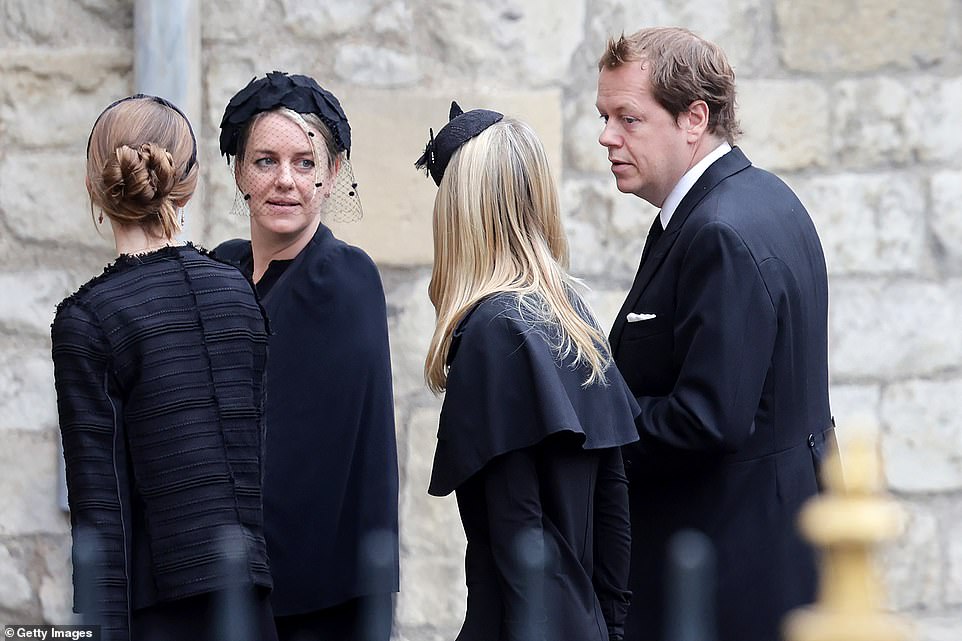 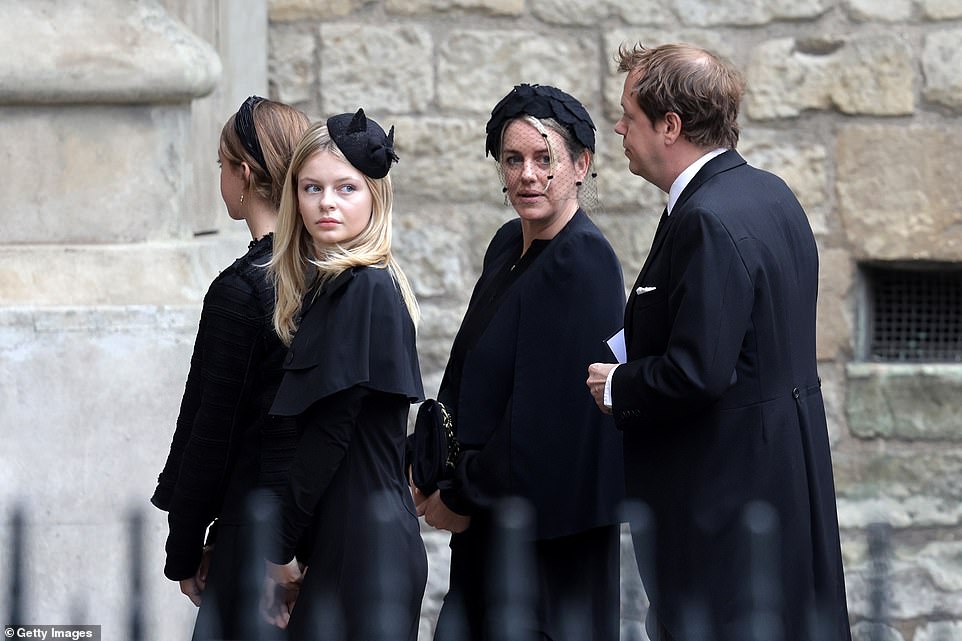 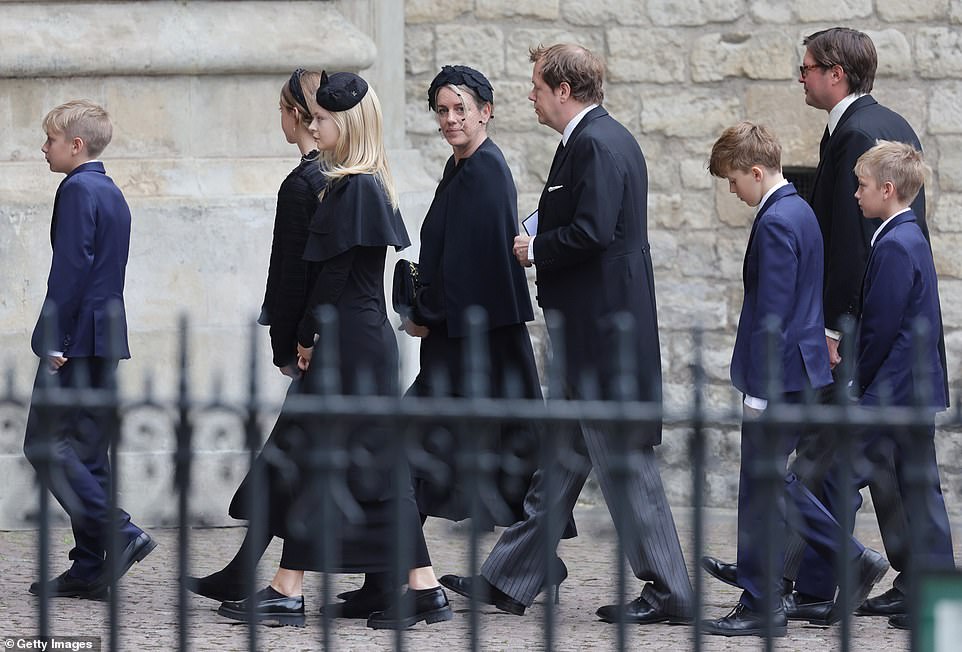 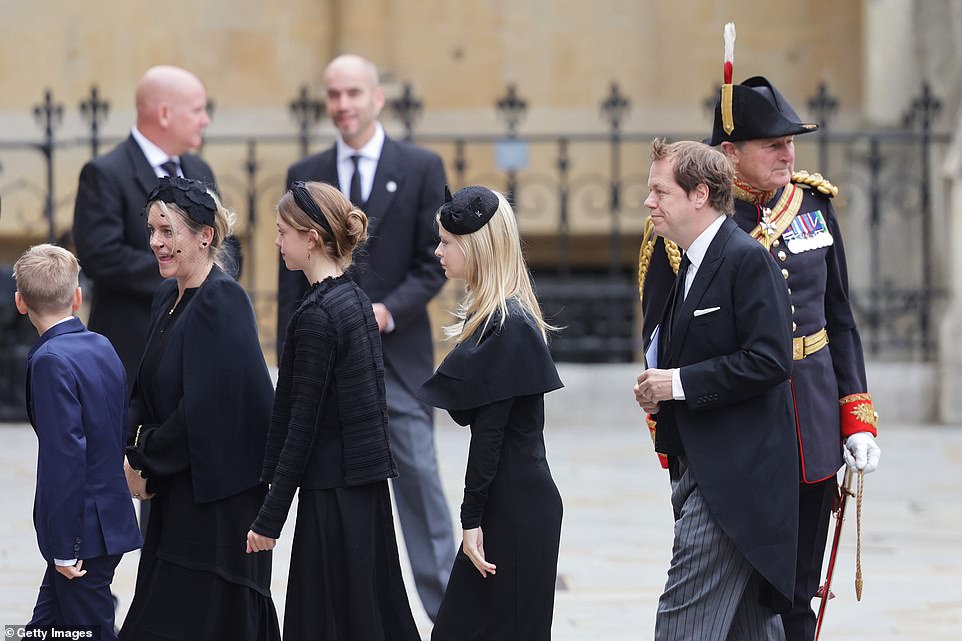 The Middletons, who live in Berkshire, will be keen to support the Princess of Wales and their grandchildren today, Prince George and Princess Charlotte, as they attend the funeral for the Queen.

The Prince and Princess of Wales only recently moved closer to Kate’s parents as they moved to Adelaide Cottage at the end of last month.

Dignitaries from the commonwealth including Australia, New Zealand and Canada will join the Firm in mourning today, as well as monarchs from across Europe and the world.

The Queen’s state funeral today will end with a two-minute national silence in a ‘fitting tribute to an extraordinary reign’ before she is laid to rest beside her late husband.

Police have also been granted a no-fly zone order over London on today, which will follow 10 days of mourning.

As well as thousands of uniformed Metropolitan Police bobbies drafted into action, plain-clothes officers will also mingle among crowds to monitor any threats.

It is expected that other forces will be asked to provide officers under ‘mutual aid’.

The Queen’s Coffin will today be carried from Westminster Hall to the State Gun Carriage, and then positioned outside the building’s North Door.

The procession will then go from New Palace Yard through Parliament Square, Broad Sanctuary and the Sanctuary before arriving at Westminster Abbey just before 11am.

After the State Funeral Service finishes at around midday, the coffin will be placed on the State Gun Carriage outside the Abbey.

At 12.15pm, the procession will set off for Wellington Arch at Hyde Park Corner. 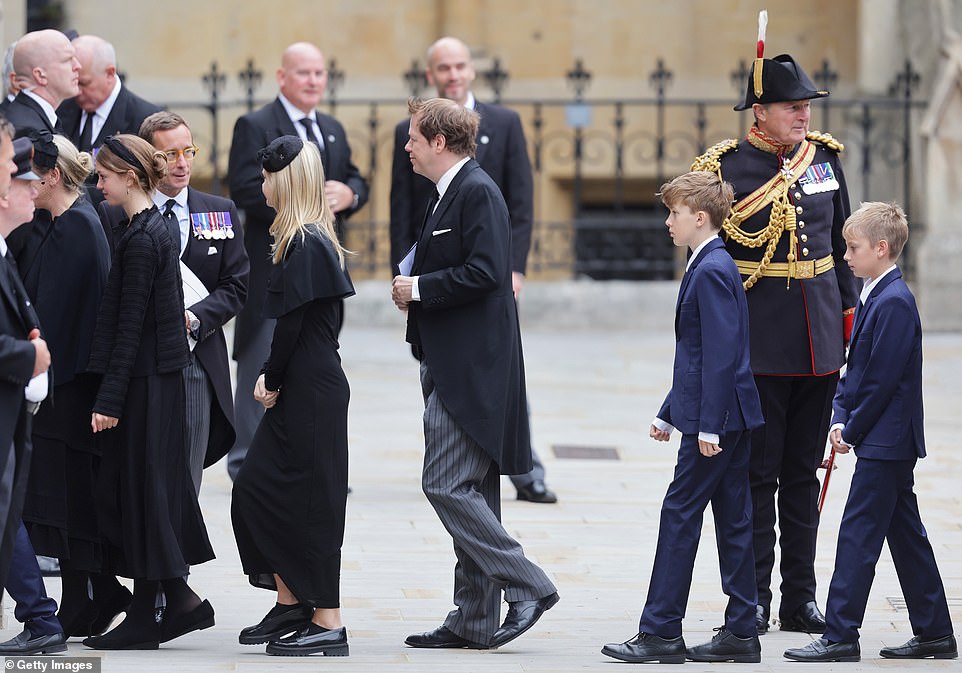 At Wellington Arch, the Queen’s coffin will be transferred from the State Gun Carriage to the State Hearse just after 1pm, ahead of the journey to Windsor.

It then will travel from central London to Windsor, on a route that has not been disclosed by the Palace. When the hearse arrives in Windsor, the procession will begin just after 3pm at Shaw Farm Gate on Albert Road.

The state hearse will join the procession, which will have been formed up and in position, at Shaw Farm Gate before travelling to St George’s Chapel at Windsor Castle.

Just before 4pm, the procession will halt at the bottom of the West Steps of St George’s Chapel in Horseshoe Cloister. Here, the bearer party will carry the coffin in procession up the steps into the chapel.

The Queen will be interred during a private burial at King George VI Memorial Chapel in St George’s Chapel at Windsor Castle at 7.30pm.