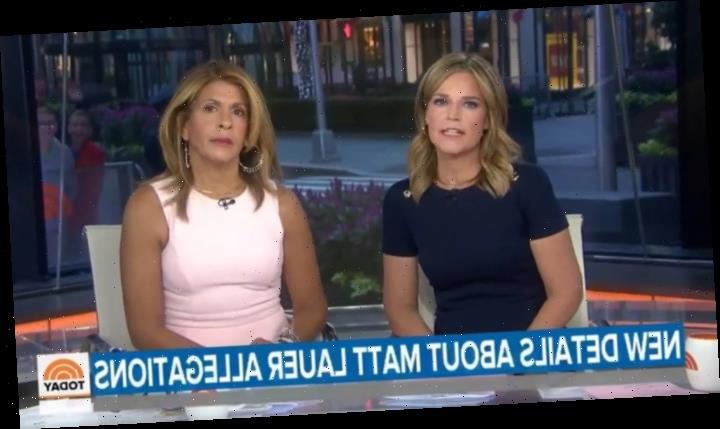 On Tuesday, news broke that Ronan Farrow’s new book “Catch and Kill” includes an interview with Brooke Nevils, a former NBC News employee whose complaint about Matt Lauer led to the co-anchor’s firing from the “Today” show in 2017. Nevils now alleges that at the 2014 Sochi Olympics, Lauer anally raped her in his hotel room.

Guthrie expressed her concern for Nevils, adding, “We support her and any women who come forward with claims. And it is just very painful. For all of us at NBC who are at the ‘Today’ show, it is very very difficult.”

In a separate statement, NBC News said, “Matt Lauer’s conduct was appalling, horrific and reprehensible, as we said at the time. That’s why he was fired within 24 hours of us first learning of the complaint. Our hearts break again for our colleague.”

Kotb noted that the new allegations had shook her deeply because she had worked with Lauer for 12 years.

Lauer has responded to the allegations in an open letter in which he admits to an affair with Nevils, but claims it was consensual.

“I had an extramarital affair with Brooke Nevils in 2014,” Lauer wrote. “It began when she came to my hotel room very late one night in Sochi, Russia. We engaged in a variety of sexual acts. We performed oral sex on each other, we had vaginal sex, and we had anal sex. Each act was mutual and completely consensual. The story Brooke tells is filled with false details intended only to create the impression this was an abusive encounter. Nothing could be further from the truth. There was absolutely nothing aggressive about that encounter. Brooke did not do or say anything to object. She certainly did not cry. She was a fully enthusiastic and willing partner. At no time did she behave in a way that made it appear she was incapable of consent.”

Farrow is best known as one of the journalists who broke the story about sexual assault and harassment allegations against Harvey Weinstein. “Catch and Kill” documents his attempts to get that story and includes a damning portrait of NBC News, his former employer. In the book, Farrow claims that the new network was obstructive. He eventually published his story in the pages of the New Yorker.