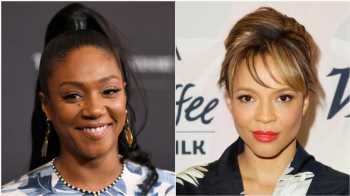 Tiffany Haddish and Carmen Ejogo are among five actors who have been cast in the forthcoming Netflix limited series “Madam CJ Walker” about the black hair care pioneer and mogul.

The four-part series hails from executive producers LeBron James and Octavia Spencer, who will also star as the titular Madam. The series is inspired by the book “‘On Her Own Ground’ “by A’Lelia Bundles, Walker’s great-great-granddaughter.

Haddish will play Lelia, the smart and feisty daughter of Sarah Breedlove (Madam Walker) and her late first husband. Raised by her single, hard-working mother, she is eager to be independent. After falling in love and marrying the feckless John Robinson, she frequently finds herself coming to her husband’s defenses. Meanwhile Ejogo will play Addie, a hairstylist and former friend of Sarah Breedlove. Addie is described as a savvy business woman herself, who parlays her good looks and social standing into a profitable African American hair care business.

Also joining the cast are Blair Underwood, who will play Sarah’s husband Chares James Walker, Garrett Morris who will play CJ’s father Cleophus, and Kevin Carroll who will play Ransom, a Pullman porter whose many degrees include law and patents from Columbia University.